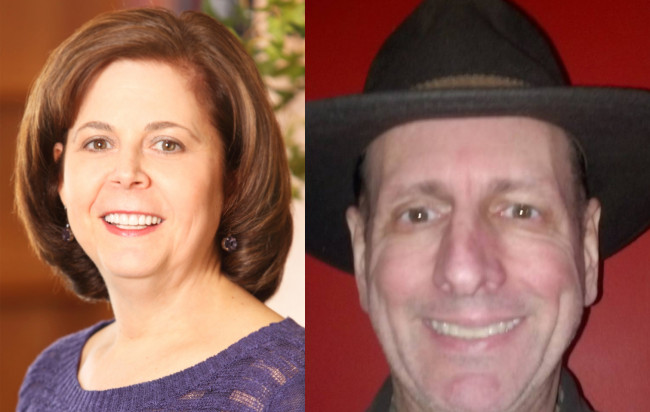 The Olde Brick Theatre resides in North Scranton’s business district, nestled in the hillside of West Market Street. When you approach the Olde Brick, you will see white aluminum siding, streaming lights, and a white, paint-peeled door, as if you were entering someone’s home. Once inside, as the name denotes, you will observe a dimly lit background, composed of chipped bricks, pipes, and more peeling paint. The theater is the size of an intimate living room, containing several risers of chairs and a lacquered coal-black stage at floor level. As cold and industrial as this theater may appear, like the city of Scranton itself, it simultaneously provides a warm welcome for hometown writers and performers alike.

NEPA Scene talked to Taylor and Thiede about the showcase and their lives as writers. Both are talented and accomplished, yet they have vastly different experiences and perspectives as accomplished authors.

Taylor, a Scranton native, teaches English in the Pocono Mountain School District. She obtained her MFA in Creative Writing from Wilkes University, and her novel, “Sing in the Morning, Cry at Night,” was selected as a “Top Summer Read for 2014” by Publishers Weekly.

Taylor, who is now working on her follow-up novel, “All Waiting Is Long,” bestowed her wisdom on creative writing through e-mail.

NEPA SCENE: Briefly describe the Writers’ Showcase and tell us why you became involved.

BARBARA J. TAYLOR: Writers’ Showcase is a wonderful local reading series that found a new home in the Olde Brick Theatre on West Market Street. Scranton is such a rich area for the arts. I’m thrilled to be reading at this venue on June 27.

It’s so important for writers to get out from behind their computers and become a part of a writing community. It’s where you find kindred spirits who offer what’s needed -support, a kick in the pants, whatever. Writers’ Showcase is one place to find that community. It’s where people who love good writing gather and share. It’s exciting to be a small part of that.

NS: What or who influenced you to become a writer?

BJT: My mother always read to my sister and me, so that’s probably where I first fell in love with words. While my parents were not writers, they certainly encouraged me to pursue my dreams. And I have to say, I was influenced by every English teacher I ever had.

NS: What do you write, and where does your inspiration come from?

BJT: I love family stories. From a young age, I could listen to my older relatives talk for hours, and at some point, I even started taking notes! My novel, “Sing in the Morning, Cry at Night,” is loosely based on a family tragedy. I like the idea of creating fiction out of something true.

NS: What advice do you have for aspiring writers?

BJT: Read, read, read, and write, write, write. Study what other people have written and learn from that. I also have to say, as an alum of the Wilkes Creative Writing MFA program, if you really want to hone your skills, Wilkes has one of the best programs out there.

Thiede obtained his MFA from Goddard College and has toured the country reading his work. His poems have been featured in publications like Pitkin Review, Aquila Review, and Zygote in My Coffee, and his own books of poetry include “Gazing Behind My Eyes,” “Random Poems Now With Homes,” and “Confluenza.” He also writes fiction, collected in his books “Death and Deception Shake Hands” and “Holden Resurrected,” though he did not initially envision himself being a writer.

He began writing letters in college to his friends and family that were “stream of consciousness” and started writing poetry after experiencing a breakup. His interest in literature developed during this time and grew from there.

“I am influenced by the places I have been. Seeing the variety of differences in landscapes makes you write differently. Landscapes seep into me and I write,” Thiede said in a phone interview.

He occasionally struggles with writer’s block, like the rest of us, writing for extended periods of time and then taking breaks, sometimes making it difficult to get back into writing again. He pens notes to himself to remain inspired.

After these breaks, though, his mood in his writing is altered by what is currently happening, and when he revisits his writing, his work has changed.

“After writing, I add the five senses,” Thiede explained, ensuring that each sense is equally distributed.

This “adds color like a painting,” making his work is a “collective piece.” He also overcomes his difficulties in writing by eliminating redundancies.

“If you’re using the color blue, think about what color blue it is, and what other words represent this color.”

Thiede will share his flash fiction – “a short story of 1,000 words or less, created for performance” – at the showcase. Now that he has published work under his belt, he strives to make writing his full-time career.

“Great writers take talent, persistence, and effort. Write a lot and continue working at it. Study writing like anything else. Read literature, critiques of literature, and guides in how to write,” he suggested to other budding writers.

“Read in front of a mirror. Like [Jerry] Seinfeld said, ‘People are more afraid of public speaking than dying.’ Go to open mics and hear your work; your poetry should be read aloud. Pay attention to your audience. Take people’s advice, and don’t give up.”