I was alone in my gallery, prepping for an upcoming auction, when two women (I’ll call them Dense and Denser) walked in to have a look. They perused the inventory, making squealing quips and clucks. I gave them a few minutes to walk around before I greeted them and asked if I could be of any assistance.

Dense pointed to a chair, “How much is this?”

I explained that they were not in a retail outlet, but an auction gallery. The women stared blankly at me. I elaborated by telling them how the items they were admiring were for the next auction and what they would have to do to attend. Still, they were confused. I refined my explanation to single syllable words and sentences that lacked participle phrases. I heard the hamster wheels squeaking in their heads. Their eyes glossed over. They spoke briefly to each other in some strange, tittering language. Finally, the concept of auction sank in. They both exclaimed, “Oh! We get it!”

Denser continued to pirouette and study her surroundings. Her eyes twitched with inquiry. Her nose wrinkled with a query. “Where do you have the auctions?” she asked. “Here?”

Dense suddenly shrieked with delight and pointed to a piece of furniture that was “glistening like gold” (or so it was said) in the florescent lighting. It was a waterfall dressing table that was missing its chair. It was the typical kind of its era, not like a vanity or desk, but two pedestals of drawers connected by a plane of wood that almost touched the floor, all backed by a large round mirror.

Dense pointed to it again and said, “Oh my God! What is that?”

“It’s a dressing table,” I answered.

Dense approached the dressing table, turned away from it, and sat in between the pedestals so that her back was to the mirror. She then began to pivot her upper body at the hips and strain her neck as if she was trying to bite her own ear.

A look of dismay washed over her face. She bit her lip and shrugged her shoulders. She looked at her friend, Denser, and asked, “How are you supposed to see yourself in this thing?”

Denser furrowed her brow and answered, “I don’t know.” 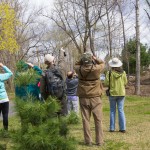 Take a guided bird walk down the Lackawanna River Heritage Trail
BEHIND THE BLOCK: Overt bidding techniques