I’ve already discussed stealthy bidding techniques and overt ones. Then I took a stroll through that cerebral zoo of mine where I keep all of my absurdity. There I found silly bidding techniques, ones that I’ve never actually seen used, but that would be hilarious should they ever be employed by auction-goers.

Do you want to bid on an item and scare off your competition at the same time? Then when that coveted treasure is placed on the block, take a deep breath, raise your bidding card high into the air, and shriek like a teenage girl who’s been cornered by Jason Voorhees.

Grab a pair of cymbals and crash that brass together when you want to bid.

Either bring your own or buy a boxlot of porcelain dinnerware as soon as you can. When you want to bid on an item, yell “OOPAH!” and smash a plate on the floor. (Also bring a broom.)

The Hand of Foam

Are you going to an auction that you know is going to be very crowded? Are you afraid that your bidding hand will be lost in a sea of appendages and go unnoticed? Then be sure to bring one of those giant foam hands with you that are common at sporting events. It’s a can’t miss.

Are you a Pittsburgh Steelers fan? Do you wish you could use your Terrible Towel during the off-season? Why not bring it to an auction and twirl its yellowness high above your head when you want to bid?

Nothing says “I’m bidding!” like a can of compressed air that squeezes out at 150 decibels.

Macho Man Randy Savage is most remembered for two things: Slim Jim commercials and his famous, vein-popping exclamation of “OOOH YEAH!” So take an auctioneer down memory lane. Wear a fluorescent camouflage leotard, and when you want to bid, point at the auctioneer and yell “OOOH YEAH!” More than likely you will annoy the rest of the crowd, so bring some Slim Jims to share. The other bidders will hate you less.

Remember when Meg Ryan faked that orgasm in “When Harry Met Sally?” What better way to get an auctioneer to notice your bid than to emulate that moment of cinematic history?

When you want to bid, jump up and down with your hand in the air while yelling “ME! ME! ME!” like you’re trying to get picked for a kickball team.

Don a pleated skirt and a letter sweater. When you want to bid, kick high and wave your pom-poms. Bring a few friends; form a pyramid. And don’t for the spirit fingers.

Please note that I don’t actually recommend using any of the preceding methods. (Especially at my auction!) By writing this post, I am simply indulging my twisted sense of humor. 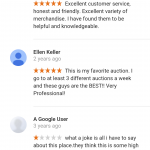 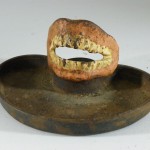