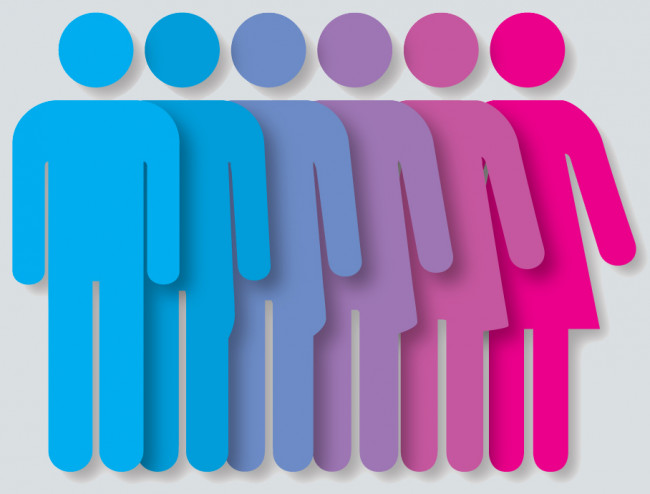 As strange as it may seem, one of the things that kept me accepting that I was transgender was that no one had explained to me that I could be a woman and still be attracted to women. Not understanding this, I convinced myself that I was just confused about who I was and who I was attracted to. It kept me from transitioning until, one day, a friend said to me, “Honey, that just means you’re a lesbian.” And then it clicked. Everything went right into place.

Looking back, why wasn’t I able to come to terms with this sooner? Why did I struggle to accept the truth? I couldn’t help but wonder, “Did I miss something during sex-ed, biology, and health class?” Perhaps, if I’d had more information, I wouldn’t have struggled so. But when did we learn about people who are transgender in school?

The truth is, we didn’t. The information simply wasn’t available, and no one was adding it to the curriculum to teach it to us. I took a keen interest in the metamorphic process humans go through during puberty when I was in junior high because I didn’t like what I saw on the pages or what I saw in myself. The more I came to understand what it meant to mature into an adult male, the more I rejected it. I was becoming consciously aware of my true nature, but I didn’t know what to do about it. As much as I looked for answers, I couldn’t find them. I didn’t even have a name for it…

In the more than 20 years since that time, we’ve come to learn a great deal about the feelings transgender people often experience, and we do finally have a name for it: gender dysphoria, a.k.a., gender identity disorder.

Gender dysphoria describes a variety of feelings and symptoms that may or may not be present in every transgender individual. It’s a little different for everyone, and it usually goes far beyond simply wanting to wear clothing designed for the opposite gender. Unfortunately, it can be difficult to identify gender dysphoria, even by professionals. In fact, many professionals are hesitant to diagnose it as such; some refute its existence while others are still unaware that it exists at all. The only thing any of them really need to understand, however, is that the desires and emotions felt are very real, and they don’t go away. Simply ignoring them, hoping they’ll just disappear, often has detrimental, even fatal results.

Gender dysphoria, if not dealt with, can lead to a lifetime of frustrating, unfulfilled relationships, hurt feelings, emotional scars, trust issues, and resentment. It’s nearly impossible to ignore, and even if you do acknowledge the problem, transitioning may not be possible or desired. Between the internal forces affecting a person and the external forces of bullying, rejection, and violence working against them, it’s no wonder so many are lost to murder or suicide.

The loss of transgender lives is at an epidemic proportion; none of us are truly safe, regardless of age, location, social status, or security. In the last month, alone, we’ve lost two transgender individuals. Mercedes Williamson, 17, became the ninth transgender woman to be murdered in 2015 while Jessie Shipps, a 32-year-old Air Force veteran, died from an apparent suicide only a few days ago.

When does it end? How do we stop this? How do we make the world accept transgender people and allow them to accept themselves? Until transgender people become more common among the general population, we are going to continue losing lives. We need to do something, and I believe education is the key.

I believe education in public schools must include the LGBT spectrum. We have to reach people while they’re young and still in school, before they go out into the real world and are left to fend for themselves with feelings they were never equipped to interpret. It must be dealt with, or it will only be a matter of time before they, or someone they know, gets hurt. It’s just that simple.

I know I’m not the only one who feels this way about the subject, but I am aware of the tremendous work ahead. I’m also aware of the work constantly being done against us by organizations such as the Family Research Council that continue to slander and defame the transgender population. Too many people have it set in their minds that the transgender community is committing to a life of sin. They want to apply their interpretations of the Bible to our lives. Meanwhile, among those who are more secular, many believe that children aren’t aware of sexuality enough to know whether they are homosexual or transgender, yet they are willing to assume a child – as young as a newborn – definitely understands it is heterosexual and cisgender. That’s only because they believe that being transgender or homosexual is abnormal, when it’s not – it’s only uncommon. Uncommon is NOT the same as abnormal. Many children do, in fact, “know” as early as age 3, although experts put the median age closer to around 9-12 years old. Parenting.com has a breakdown of what concepts children can grasp and by what age they become aware of them. Again, I can only speak from personal experience, but I’d say their list is right on the money.

Whether the general population likes it or not, many more children are identifying as transgender, and this is leading schools to radically change their policies. For a great example, look at the way Carlos Lopez, principal of the Mid Valley Elementary School in Throop, Pennsylvania, and the school’s counselor, Robyn Buckshon, went to great lengths to welcome a transgender student who had transitioned over the summer between first and second grade. When the student’s parents approached school officials to inform them of their child’s needs, it began a process that strengthened the school’s ability to accept and educate all students in an environment that encouraged equality. Parents were informed, students were welcoming, and faculty were equipped with the skills to do their jobs. No questions were asked by parents, classes were not disrupted, and no resistance was put up about including the student in the school. According to Mr. Lopez, the difference is like night and day. Where the student was once uncooperative, easily upset, and closed-off, after transitioning, the student is now happy, participating in class, and interacting with peers like never before. They are finally getting to know who this young person really is. Could this example spread to all public schools in America someday? Would this be the answer needed to save lives? Could it really be that easy?

Perhaps, someday, the sociopolitical landscape will have evolved enough that everyone will be as open and accepting as Mid Valley Elementary School. Maybe then transgender youth won’t be discouraged and bullied into killing themselves by their peers and their own families. Then the adults could learn a thing or two from their children, and the epidemic would finally be over. Perhaps someday could be today…