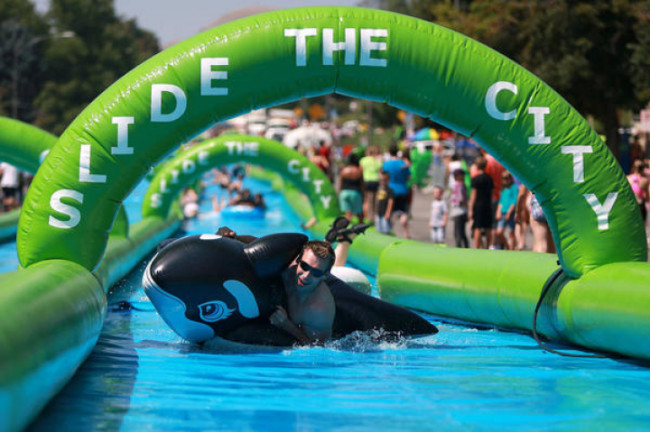 You may have seen the ads for Slide the City, promising to bring music, dancing, food, drinks and, most importantly, 1,000 feet of vinyl Slip ‘N Slide to Scranton, but will the mobile water park be able to deliver the fun and excitement they’re promising?

That depends on who you talk to. The event, which will be set up on Linden Street and Adams Avenue in downtown Scranton, hasn’t been a completely smooth ride in other cities. Earlier this month, Slide the City set up in Pittsburgh and participants complained of long wait times, poor organization, and safety issues leading to various injuries.

According to CBS Pittsburgh, Slide the City Pittsburgh sold out on June 6, selling 5,000 tickets within 48 hours, so they opened up a second day on June 7 and sold another 4,000 tickets. While some sliders said they had fun, others waited in lines too long to take advantage of their “unlimited” passes and witnessed collisions and teeth getting knocked out:

In a follow-up report, a man referred to it as “Torture the City” and “a total nightmare.” Another ended up severely spraining his ankle after slamming against the side of a slide, unable to control his speed on the way down:

The Facebook event page is riddled with complaints against the year-old company in charge, claiming that employees and volunteers were unhelpful and that they didn’t received what they paid for. Here are just a few comments:

We purchased 4-VIP tickets ($200). WHAT A WASTE OF MONEY. Despite arriving early, there was a 45 minute wait to fill our inner tubes (with some sort of dumb $2 per tube fee). We waited in line for nearly 3 1/2 hours for ONE ride. By the time we finished the 2 to 3 minute ride, the line was even longer. We gave up and left. Massive waste of time / money. I normally NEVER complain about an event, but this was chaos. Everyone behind us and in front of us agreed. Never again.

Unless you purchased the single slide only, today was a gigantic waste of money. We had to purchase the triple slide because single was sold out. Only got to ride once anyway because we waited 2.5 hours for one trip. No line management at all. People could basically jump into line where ever they pleased. Even without the line jumpers there was still no possible way of getting 3 rides in. Such a disappointment. A 2 hour drive plus the 72 dollars for my husband and I to get tickets. The slide WAS fun, but what a waste of the money paid for a triple!

HORRIBLE EXPERIENCE! From reading the many other posts on here, I can see that many others had the same experience my family had. We bought the all day passes for the 4 of us and only rode once! We got out of line the second time after waiting for more than 4 1/2 hours total! We are now out $200 for one ride! There were also numerous people who got hurt, not to mention the volunteers at the bottom of the hill who had to be body shields for people to slide into! I contacted their headquarters to let them know how disappointed we were. They responded by saying they are going through “growing pains.” It also looks like this may be an automated response, as they have told others this as well. The only thing they are interested in is making as much money as they can, at the expense (both monetarily and health) of the customer. Maybe don’t sell as many tickets so that people can enjoy it more?!?!? Hopefully they will learn from these “growing pains.” I will definitely not be recommending this to anyone!

Full and partial refunds have been offered, though it appears not all customers have been successful in receiving them. Problems continued when Slide the City “botched” a visit to Hampton, Virginia just a few weeks later on June 20, according to WAVY-TV. After the city’s health department delayed the event when it was found that chlorine levels in the water were too high, long lines formed and more than 20 people had to be treated for heat exhaustion. Once the water was flowing, many had to stand up and walk through parts of the slide due to lack of lubrication:

When NEPA Scene contacted Slide the City, we asked about the Pittsburgh event and if any precautions were being taken or improvements were being made to prevent similar issues in Scranton. We received the following response:

We’re extremely sorry about the problems at our event in Pittsburgh. Safety always comes first so we are working hard to ensure that none of these issues are repeated in Scranton. Here is what we are doing to ensure that our participants have a great time:

Limiting the slide capacity by selling fewer than half the total daily tickets that were sold in Pittsburgh.

Using a hill that is significantly less steep and thus decreasing the speed of each slider.

Responding to negative comments on the Facebook event page for Scranton, Slide the City said the “Scranton event will be run by a different crew, and we should not have the same issues in Scranton.” Additionally, they stated, “Our event in Scranton should run much smoother for everyone (see our South Bend page for example). If you have questions about the Pittsburgh event you can email info@slidethecity.com.”

UPDATE 07/02/15: Slide the City has canceled their Scranton event “due to lack of registration sales,” posting the following message on the Facebook event page:

We’re very sorry to announce that we have decided to cancel Slide the City Scranton due to lack of registration sales. We’ve been working hard the last few months to plan what was going to be an amazing event and were looking forward to bringing our giant slide to Scranton’s streets.

We’ll be refunding all registrations within the next week. If you have any questions, please email us at springbokcs@slidethecity.com

Once again, we’re extremely sorry we won’t be coming to Scranton this year, but we really hope you can join us at another one of our events in 2015.