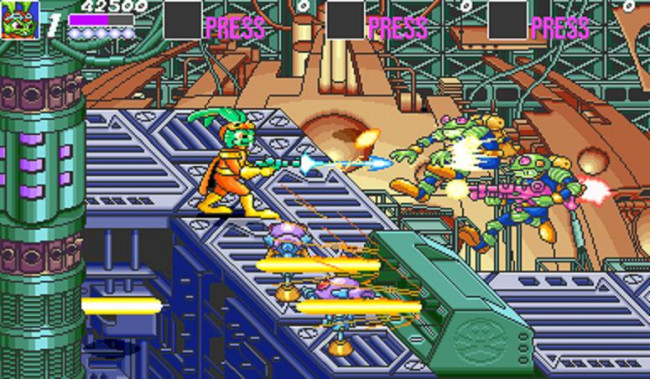 The question of whether or not it is better to be a loyal fan of a video game developer or a video game console has come up now and again at my store, and I think it’s fair to say that there are benefits to following either one. In the case of developer, what I always find interesting is when even a company that is known for a specific style or genre of gaming has games that are still overlooked or nearly forgotten by the mass majority of their faithful consumers.

Companies like Capcom and Konami, which created today’s topic, have run into some rough times in recent years, so it is nice to often look back to an era where they could do no wrong. It was pretty much a given that any game that had the Konami brand behind it during the 1980s and ‘90s was a surefire winner among arcade-goers, so it was quite the shock to me that some quality titles are often given little notoriety by critics. What’s even odder is that some of these games were tied to popular cartoon shows at the time of their release.

Today’s topic, “Bucky O’Hare,” had a questionable NES release that, while obtaining a huge price tag, just didn’t capture the attention of gamers quite like the arcade title of the same name. Today we head back to the arcades to see just why “Bucky O’Hare” deserves to be looked at with the same elite status as other Konami co-ops like “The Simpsons” and “Teenage Mutant Ninja Turtles,” just to name a few. Time to croak some toads!

A great soundtrack for a Konami arcade game is nothing new, but one would think with the license for “Bucky O’Hare” and other cartoons of the time that were like it, Konami would go all out for a great soundtrack and, in truth, they did, as one would expect. However, there’s something to be said about a game where the soundtrack isn’t even the best part about the game in comparison to some great voice acting and excellent sound effects for everything from weapons to the croaking of your enemies.

“Bucky O’Hare” is an arcade game that leaves very little time to take it all in; it is constantly moving, giving you action and adventure at every turn, and I think that, while the soundtrack is very good, it almost blends so seamlessly into the graphics and gameplay that it isn’t noticed anywhere near as much as the voice acting and the sounds you hear during the actual playing of the game. That’s pretty impressive if you stop to think about it.

One of the main reasons why gamers are always clamoring for console releases of some of their favorite arcade-only titles is because the graphics are always so much better, so much cleaner, with a crisp look that accurately depicts the subject matter. In the case of “Bucky O’Hare,” the artwork and design found in this game brings the cartoon show to life on the arcade cabinet. The colors are bright, vibrant, and each character you choose from is well-done. The enemies you encounter are also superbly drawn and designed, as well as the levels you do battle in.

Too often, games in this genre throw all these staples and clichés in that, over the years, begin to bore gamers. It’s nice to know there are games like “Bucky O’Hare” where the developers could have phoned it in, but instead they went all out in designing a great adventure that you want to go on just based on what the characters and levels look like alone. The cut scenes are no slouches either in the graphics department. To me, this is the best Konami arcade game ever designed graphically.

If someone were to ask me what makes a Konami arcade game so special, I would have to say it would be the fact that whether you spend an hour, a day, or even years away from the game, you still want to play it, over and over again. In the case of “Bucky O’Hare,” there is more variety than you’d expect from an arcade game of this era. The characters all use different weapons, different special attacks, and they all have their own strengths and weaknesses that suit various types of gamers. The levels alternate with different tasks and scenarios. One minute, you’re blasting away on foot, then you’re trying to free captives before hopping on a high-speed space vehicle and flying into battle.

When you play a game like “Bucky O’Hare,” there’s an adrenaline rush that you can’t explain because it doesn’t happen with every arcade game you play, even if it is from Konami. In the diversity of the characters and the variety in the levels, there’s so much replay value there that I am still wondering why Konami hasn’t released this game either in some kind of collection of arcade classics or even an HD remake. To me, that’s a license to print money.

Sadly, while “Bucky O’Hare” is not available, even in a digital copy for your home console, there is one solution outside of tracking down an arcade with a functional cabinet, and that, of course, would be the use of MAME emulation. Just be sure that you have a strong enough laptop or desktop computer to run it because there’s a lot to take in. The NES version of “Bucky O’Hare” may come with a pretty steep price tag but, to me, the arcade classic is simply priceless.

That does it for me this week. Join me next time as we continue this month of “Summer Shooters” with a SNES title that all too often flies under the radar for a lot of gamers. Until then, take care, and remember to always game on!