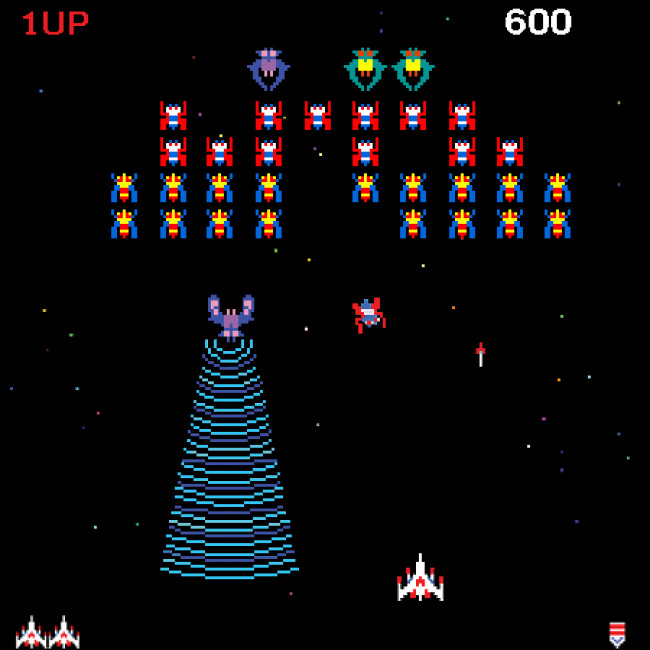 It’s difficult to explain to my nephews Ryan and Reid how awesome arcades were for me, as neither can truly understand how an arcade without the latest “Skylanders,” “Disney Infinity,” or LEGO-inspired title could be fun or entertaining in the least, but such is the folly of youth. What’s more, I think many young gamers have a hard time understanding how some games transcend from just another game you put a quarter in to play to those that exemplify what the term “iconic” really means in the realm of video games.

We finish up “Summer Shooters” month here on Turn to Channel 3 with one of the grandfathers of the shoot ‘em up, “Galaga.” We will be looking at the Nintendo Entertainment System entry, so take that for what it’s worth, but let’s not waste any time, as “Galaga” awaits!

When it comes to taking an arcade classic and giving it the home console treatment, one of the biggest fears for retro gamers is whether or not a home console can bring all the lights, bells, and whistles of the arcade experience to a smaller scale. The truth is, at least this scribe has come to find that no console can truly emulate every aspect of an arcade game to its fullest extent and capabilities, but I will assure you that the NES comes damn near close with this one.

We all know those classic sounds, those bloops and bleeps that made “Galaga” so iconic and a blast to play, and they are all here for you, from the music that plays between some levels to the challenge round music to, of course, all those great sounds you hear as you do your best to navigate and defend your ship against your vile enemies. The only arcade-perfect “Galaga” soundtrack would be on an actual “Galaga” arcade cabinet, but I salute the NES for being one step below inserting a quarter in that aspect.

To many, the graphics in “Galaga” are seemingly timeless, just as unique and innovative during the 1980s as they are now, as apparent by the appearance of the ship-stealing Galaga in the “Super Smash Bros.” games on the Wii U and 3DS. That being said, as great as they are on the NES, for my money, they appear a bit crisper, clearer, and focused in the arcade version by comparison.

To deny the addictive qualities of “Galaga” would be a bold-faced lie to most devoted retro gamers. The allure of attaining that elusive high score, the skill when an enemy ship tries to suck you in, all of that is still just as appealing today as it was all those years ago. There’s a reason “Galaga” is looked at as a big deal, placed at the entrance to many arcades – because it keeps you coming back for more. Any early arcade game can be easy for any level gamer to just pick up and play, but few do it with the quality and overall fun that “Galaga” provides to each and every person who plays it. The controls in “Galaga” are super responsive, from firing off your weapon to dodging the approaching waves of enemies, creating an adrenaline rush that can sometimes be missing in today’s gaming world.

If you want to begin collecting shoot ‘em up games, then “Galaga” is a great place to start. It created and perfected some of the many tools we often take for granted in modern gaming, as well as starting what would many years later become a genre juggernaut in shooter games.

Well, that’s it for me, another month in the books. Next month, we take a look at some games I fondly remember playing in the summer, when my mother told me I should be out playing. Until then, grab yourself an ice-cold beverage of choice, sit back, relax, and game on!