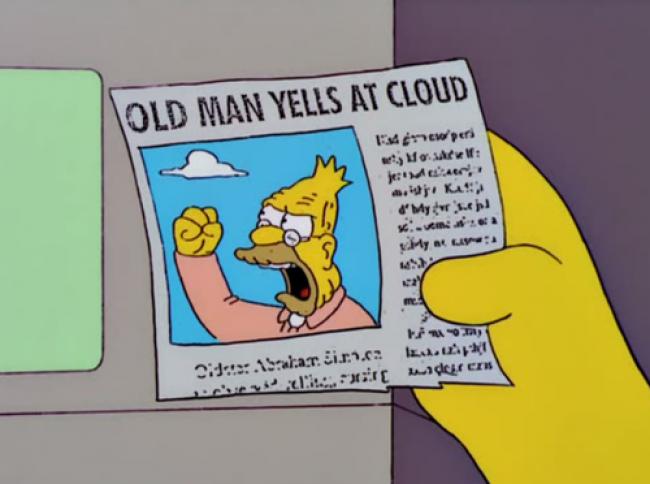 Last year, I turned 30. I still felt like I had the pep and vigor I had in previous years. I’d go to concerts, movie premiers, and I’d constantly hang out with friends anywhere and everywhere. Actually, none of that has changed since turning 31 a few months ago. And yet something is very different. I don’t see the world as I once did. I think… I may have gotten “old.” When the hell did that happen?!

When I look at certain people in their late teens and early 20s, I do so with a disdain, muttering words like “dumbass(es)” and phrases like “damn kids and their [insert interest or whatever here]” as if I’m Red Forman from “That ‘70s Show.” I guess it comes down to the understanding of things, or rather a lack thereof. To quote the great Abraham Jay-Jedediah Simpson II, “I used to be ‘with it,’ but then they changed what ‘it’ was. Now what I’m ‘with’ isn’t ‘it,’ and what’s ‘it’ seems weird and scary to me. It’ll happen to you!”

Music isn’t what it used to be for me. Yes, there are still bands that have been creating great tunes for ages and show no signs of stopping. NOFX, Pennywise, Less Than Jake, Bad Religion, and The Bouncing Souls are just a short list of bands that are still going strong. I mention those bands because they were mainstays on the Warped Tour for years! I recently saw this year’s Warped Tour lineup for their Scranton stop and, out of all the acts slated to play this multi-stage event, there are only three bands that I’ve heard of! Worse yet, out of those three (H2O, Motion City Soundtrack, and Black Veil Brides), I’ve only heard and listened to H2O, and that was years ago!

A tour that was built on punk rock, mosh pits, and skateboarding has somehow mutated into one filled with emo-core melodrama, tight jeans, and an overabundance of post-millennial marketing. I don’t know if it’s the promoters’ decision, the music scene in general, or if one perpetuates the other, but it certainly isn’t the Warped Tour I remember. Then there’s the cost of tickets. You used to be able to attend Warped Tour for $25-$30; now you’re lucky if you’re only paying $65 after surcharges. That’s nuts! What happened, Warped Tour? Why has something that I once loved and stood up for changed so goddamn much? Is it possible that the premiere punk rock tour may have sold out? For shame! Yeah, you’re totally being scolded. Deal with it!

Clothing is another thing that has confused me recently. And yes, assholes, I still remember how to put pants on – you jump into both legs with reckless abandon! If you are still standing afterwards, you’re left knowing it’ll be a good fucking day! Anyway, “fashion” is beyond me; it always has been and it always will be. I don’t get skinny jeans on guys. I’ll never understand it. Jeans don’t have to be so loose that they are hanging below one’s ass, but they should be loose enough to give “Jimmy and the twins” some breathing room! If you have to strain yourself to get into them and then use a sturdy pair of pliers to work the damn zipper up, that is far too much exertion to start a day.

Moving up the torso, what is going on with male skate fashion? Since when did functional clothing turn into $25 designer tank tops and $40 graphic tees for the sake of “fashion” and “style?” Jesus, bring back $20 graphic tees, simplistic and functional skateshoes, and stop pandering to useless hipsters! I walked by PacSun the other day with a buddy and a Darth Vader display beckoned to us. In front of the display, there was a selection from a new clothing line featuring “Star Wars.” Cool, right? Nope! There was a baseball jersey-looking thing with an all-over print of Stormtrooper helmets on it. Next to that was a slim tank top with more all-over prints, but this time it was Vader. Personally speaking, the entire “fashion line” felt wrong. It’s overpriced, dumb-looking clothing that is made by people who don’t understand the source material of the images they are putting on their product and are aiming it at people who aren’t among that source’s fan base!

A nice salesclerk asked if we needed any help as we were there staring at the table of clothes. I told her that the Dark Side is quite alluring, but we were just browsing. She stared blankly at me with a face one normally sees a cat make when it gazes upon you with confusion or contempt. Seriously?! Are my jokes and references failing me now too? No. That can’t be. That’s impossible! See what I mean? That line would’ve at least elicited a chuckle among my friends. However, with that salesclerk, my joke went over like a fart in church.

I guess what really chaps my ass about all of this is that something that I once loved has forgotten me. I feel lapped, as it were – although that should be a familiar experience for me. Perhaps I’m not old, though. Maybe I’m merely too old for Warped Tour. It could be the case that I’ve just matured and outgrown the show and what it stands for presently. As for “fashion” and “style,” I still don’t have a damn clue about that garbage! Honest to God, it just boggles my mind. I’d rather be comfortable than look cool.

Now I am going to do something “old people” do all the time. I’m gonna blame the kids, but I’m doing so indirectly! So let me give it a shot – stop indulging them! Yes, it’s the kids and tweens who have your focus now, people who sell products and brands, but we (adults) are making the money! Yes, their parents are giving them the money that’s being spent on your dumb shit. If these parents are OK with their earnings being spent on overpriced Warped Tour tickets or stupid-looking clothing so their kids can look trendy, then that’s their own damn fault! I just know that we have a voice, too, damn it!

Personally speaking, I may not be with “it” anymore, but for fuck’s sake, I am still with “something.” Fuck “it” and forget “it!” I am officially over whatever the hell “it” is, was, or ever has been! Perhaps that’s what it is to be older, but not necessarily old – to see through the bullshit better at my 31 years than I did in my early 20s. In that regard, I’m totally OK with that even if I have to outgrow, or lose touch with, things that I once understood.

PHOTOS: Vans Warped Tour at The Pavilion at Montage Mountain in Scranton, 07/11/16