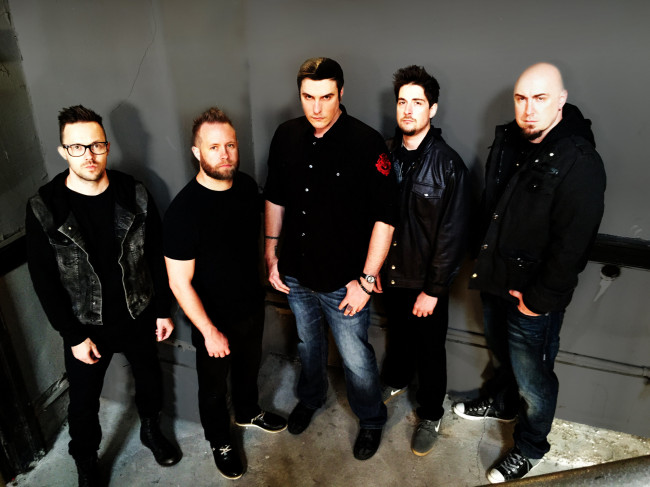 Fresh off the release of their No. 1 album, “Dark Before Dawn,” Northeastern Pennsylvania natives Breaking Benjamin are coming home to rock The Pavilion at Montage Mountain on Friday, Sept. 18. The event, presented by Live Nation and SLP Concerts, will feature special guests Sevendust as support.

Tickets go on sale this Friday, July 17 at noon and will be available at ticketmaster.com, Ticketmaster outlets, The Pavilion Box Office, or by phone at 800-745-3000.

Six years have passed since Breaking Benjamin released their last album – 2009’s “Dear Agony” – but one listen to their new album, “Dark Before Dawn,” and it becomes clear that time away from the music world hasn’t caused them to lose a step. If anything, their sound is more invigorated, energetic, and purposeful than ever. Appearing on the album with Burnley are guitarists Jasen Rauch (RED) and Keith Wallen (Adelitas Way), bassist Aaron Bruch (OurAfter), and drummer Shaun Foist (Picture Me Broken.) The result is simultaneously vintage Breaking Benjamin and yet decisively more cohesive.

Over the past decade, Breaking Benjamin has achieved worldwide success through their chart-topping music, their electrifying live performances and, in the process, amassed a sizeable and diehard fan base (over 5.7 million likes on Facebook, 220,000+ followers on Twitter). And, it’s the fans that ultimately fuels Burnley.

“The band has always really been about the fans to me,” says Burnley. “That’s who comes first to me, and that’s what it’s all about. There’s nothing that matters any more than that to me, and so I’m just happy I’m able to give them the best they can possibly get.”

The band also recently confirmed that they will headline the inaugural Axes & Anchors music cruise, which is set to depart Miami on Feb. 20, 2016 and sail to Key West and Nassau, Bahamas before returning Feb. 24. This will be the first time the band will perform on a music cruise.

As for Sevendust, they’ll be supporting their 10th album, “Time Travelers & Bonfires,” released in April 2014.

For the record, the gold-selling hard rock stalwarts re-recorded six classic tracks acoustically and cut another six new acoustic numbers. Despite inception at different moments over nearly two decades, all 12 tracks converge upon one distinct journey.

“For the last 10 years, people have been talking about it,” smiles Witherspoon. “They kept asking us to do a full record like that. So we had to do something unique and very special for them.”

For the first time, they engaged their diehards via PledgeMusic. In the midst of supporting their ninth effort, 2013’s “Black Out the Sun,” which debuted at No. 1 on Billboard’s Top Hard Music Albums chart and No. 18 of the Top 200 Albums chart, the boys initiated a PledgeMusic campaign to fund what would eventually become “Time Travelers & Bonfires.” The response proved overwhelming, to say the least.

Within 60 days of a planned 130-day campaign, the band exceeded 155 percent of its goal, offering incentives ranging from dinner with the members to a jam session at a pledger’s home. The idea initially spawned from Connolly and Hornsby’s experience utilizing the platform to successfully fund the 2012 debut from their side project, Projected.

“That was the first time I got familiar with the whole idea of fan-funding,” recalls Connolly. “It worked out so well that it felt obvious to try for Sevendust. People get to buy in on the front end, and they get some killer exclusives in return. We were floored by the amount of support we received. At the end of the day, it’s about the fans. This gives them more power. They make us. We cut out all of the middle men and went right to crowd.”

“We’re a people’s band,” adds Lowery. “We’re very accessible. We’ve toured these same cities for almost twenty years, and we’ve become family with everyone who comes out to the shows. They have a tremendous amount of loyalty to us, and we wanted to bring them into the process of making the record.”

Rose says, “We got to see firsthand how much the people who support us really care. We’ve never taken them for granted. It was amazing to be able to do this record together with them. This is their record.”

The audience actually had the opportunity to choose which songs Sevendust would re-record via a poll on Facebook. As a result, they chose the six “classics” from the catalog that would appear acoustically when they hit Architekt Music Studios in Butler, New Jersey last December. Among those, their signature anthem and the set’s first single, “Black,” takes on a whole new life. Preserving the original’s intensity, the group transposes it into a hypnotic and haunting gem.

“That was literally the first song I ever wrote in 1993,” Connolly says. “It was demo No. 1 before we were even Sevendust. It’s amazing that everyone wanted to hear it in this form. As far as we’ve gone and as many things as we’ve done, that one is the epitome of what Sevendust is. That’s the embryo and the nucleus. We built this from zero, and it’s incredible to revisit where everything began.”

Hornsby goes on, “It’s probably the song we’ve played the most out of our catalog. To do it acoustically shows the longevity and strength of it.”

Elsewhere on the record, “Come Down” begins with an ominous guitar before building into a soulful and soaring refrain from Witherspoon. The singer explains, “Everything came together easily. This one felt so natural. It’s dedicated to those people we’ve seen past. We want to see them again. It says, ‘Come on back until we’re all done, and then we’ll go back up together.’ Experience and live what we’re going through now.”

There’s also an extremely heartfelt tribute to Connolly’s recently deceased father within “The Wait.” It’s a song that speaks loudly to all of the members and anybody else who’s ever lost someone.

“I was thinking about my dad a lot,” he sighs. “I decided I would just write, and whatever comes out comes out. I wanted to channel him without trying. I initially wanted to sing it, but I couldn’t make it through. I showed it to the guys without telling them who it was about. They immediately loved it. Then I told them the story after the fact. Lajon started crying when I said it was my dad’s song. It’s extremely personal, and my brothers hooked me up on it.”

“It’s such a heavy song,” agrees Lowery. “My father had passed too, and John and I shared that. It means a lot to both of us. There’s a therapeutic release that we shared.”

“That one gives me chills,” Rose adds. “I have a hard time listening to it. It reminds me of my own Nana. I think it’s the deepest and most emotional song we’ve ever written.”

The album title itself reflects its two halves, with the time travelers being the old songs and the bonfires representing the new ones. Witherspoon explains, “When you play those old songs, it puts you back in that time and place mentally. They’re like time travelers. The bonfires have that fresh and new fire. It’s a great juxtaposition.”

“We’re bringing the old songs into a new format,” claims Hornsby. “It’s like time traveling and breathing fresh life into something we’ve spent so much time with. Also, after all these years together, we are time travelers.”

Ultimately though, this is for that “family” who have been with Sevendust since day one. They gave the group three consecutive gold records, starting with their self-titled 1997 debut and followed by 1999’s “Home” and 2001’s “Animosity.” They’ve packed sold-out shows around the globe, and they elevated the likes of their eighth offering “Cold Day Memory” in 2010 to a career-high chart position of No. 12 on the Billboard Top 200. Still, there’s more road to travel.

“We’re blessed to still be doing this,” Witherspoon leaves off. “We wanted to give everybody something to hold on to. I hope they enjoy it. It feels like a magical experience to me, and I just want to say, ‘Thank you.'”