The Sands Bethlehem Event Center has just announced three major concerts – the Golden Boys and Meatloaf will be performing at the venue in November, and Janet Jackson will be coming to Bethlehem in January.

Frankie Avalon, Fabian, and Bobby Rydell performing together as the Golden Boys have packed venues throughout the country since 1985 and has been called “one of the most exciting shows in show business.” The show unites three exciting performers who emerged from the same South Philadelphia neighborhood, at the same time, and went on to become world-renowned personalities.

Featuring three of the most popular teen idols of the late 1950s and early ’60s, the Golden Boys have proved to be an overwhelming live concert success. Countless television appearances, a special performance for the president of United States, and a Golden Boys PBS special have brought in a vast audience of fans, and not only from the “Bandstand” generation, but all generations.

Avalon went from ’50s teen idol to a national and international star. His first song, “De De Dinah,” became a smash hit, and his recording of “Venus” was one of the biggest selling hits of the era. His follow-up hits include “Bobbysocks to Stockings,” “Just as Your Heart,” and “A Boy Without a Girl.”

With a series of performances on Dick Clark’s “American Bandstand,” Fabian became one of the top teen idols of the late ’50s. Fabian enjoyed great success with the hits “Turn Me Loose,” “Hound Dog Man,” and the million-selling “Tiger” single.

Another “American Bandstand” alum was Bobby Rydell, who had million-selling singles with “Volare,” “Wild One,” and “We Got Love,” and additional success with “Swingin’ School,” “Kissin’ Time,” and “Forget Him.” This show is sure to bring back many a teenage memory.

Returning to the Sands Bethlehem Event Center (77 Sands Blvd., Bethlehem) on Tuesday, Nov. 17 at 7 p.m., multi-platinum musician and actor Meat Loaf is one of the best-selling recording artists of all time, with worldwide sales of more than 80 million records. Tickets, which are $49.50-$79.50, are on sale this Friday, July 17 at 10 a.m.

Made famous for his rock opera “Bat Out of Hell,” which has sold more than 43 million copies worldwide, he is also known for his powerful wide-ranging operatic voice and theatrical live performances. After 35 years, “Bat Out of Hell” still sells an estimated 200,000 copies annually and has stayed on the charts for over nine years, making it one of the best-selling albums of all time.

After a 12-year break from each other, and 16 years since the first “Bat Out of Hell” album, Meat Loaf and Jim Steinman reunited for the sequel. And they picked up right where they left off, complete with kitchen-sink production by Steinman and songs with titles that read like short stories. The epic “Objects in the Rear View Mirror May Appear Closer Than They Are” was the album’s third single, reaching the Top 40.

As an actor, he has appeared in over 50 movies and television shows, sometimes as himself or as characters resembling his stage persona. He’s particularly revered for his role of Eddie in the iconic American stage and movie versions of “The Rocky Horror Show” and “The Rocky Horror Picture Show,” as well as his notable appearance in 1999’s “Fight Club.” He competed in 2011’s “Celebrity Apprentice” until nearly the end of the series, and he has appeared on many other television shows, including a memorable cameo on “Glee.”

Meat Loaf has supposedly been working with Steinman once again on an upcoming album called “Braver Than We Are,” which is scheduled to be released this fall.

An icon, a trendsetter, a businessperson, and a multi-gifted artist as a songwriter, producer, singer, actor, and dancer Janet Jackson burst onto the scene with her record-setting album “Control.” Today, she possesses an unprecedented list of achievements and remains in the forefront of her craft, a true inspiration. She’ll be at the Sands Bethlehem Event Center on Friday, Feb. 19 at 8 p.m. Tickets range from $95-$115 and will go on sale next Monday, July 20 at 10 a.m.

As an artist, Jackson excites, enlightens, leads, and embraces her fans with insights into life’s meaning and our deepest feelings. She is ranked as one of the Top 10 best-selling artists in the history of contemporary music. Her musical style, choreography, lyrical exploration, and self-awareness has made her one of the top artists of our time, as well as a leading influence on the upcoming stars of tomorrow.

She is the only artist having Grammy nominations that span the dance, pop, rap, rock, and R&B categories. She has accumulated five Grammys, multiple MTV Awards, Billboard Music Awards, and Soul Train Music Awards, to name a few. A highly regarded performer, her concerts are stunning shows that stimulate the mind, eyes, and the soul. Intense choreography skilled to perfection has been synonymous with Janet, all while continuing to create music and star in feature films.

Summarizing her career and her incredibly raw albums, Jackson has said, “Here I am. I’m coming on. Musically, I have it. You want it. And I’m giving it to you.”

Tickets for all three shows can be purchased at sandseventcenter.com, the Event Center box office, ticketmaster.com, all Ticketmaster outlets, or by phone at 800-745-3000. 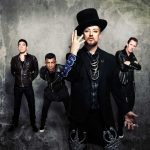