June 26, 2015 – Decision Day. The day the Supreme Court of the United States ruled that the ban on same-sex marriage can no longer be upheld. Probably one of the biggest days in American LGBT history since the Stonewall riots. The day those of us in the LGBT spectrum became first-class citizens. This is what freedom looks like, people! We did it! We can all go home, now! Happy birthday, America! Woo!

Within moments of seeing the headline (and after pinching myself a few times, just to be sure), I sent a message to my friend asking, simply, “Yay?” To which he responded, “Yes. Yay!” I then texted back, “Meh. I’m not feeling it,” and he knew exactly what I meant.

I wanted to be happy, but marriage just isn’t in the cards for me, nor him. How can I get excited for something that barely applies to me, especially when there are so many other problems I have to face? In those few moments, I pondered, “Is there a grace period? Like, should I give it an hour? How long do we let them party before reminding them of how terribly screwed we all still are?” But he was already on the ball with a Facebook post of his own, doing just that. I took a few moments with memegenerator.net to create this work of art before posting it on my own timeline: 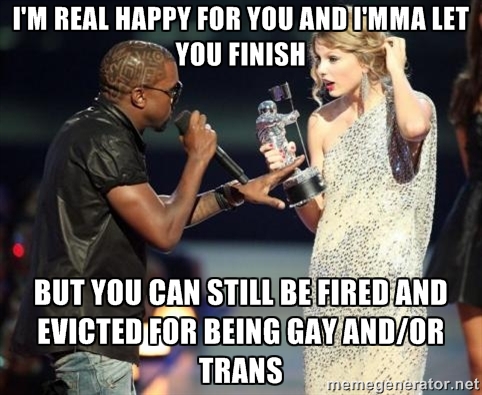 Yeah, I was “that girl.” I was Debbie Downer. I poo-pooed on the pride parade. Sorry, not sorry.

Of course, I know not everyone needs to be constantly reminded. We can have fun; we can feel good! And, after I had my coffee and perked up a bit, I was totally on-board to ride the party train to Funkytown (which, in actuality, meant driving my car to Pittston to meet up with my friends at the Tomato Bar). I put on a rainbow sticker, hugged a bunch of people, and celebrated like a little trans Ewok at the end of “Return of the Jedi.” You can even see me, briefly, sitting behind my friend Corey in this video from WNEP. It was a good time! And then, the party was over.

After the nation got over its weekend-long, Technicolor-rainbow hangover, reality set in. We were treated to an amazing breakdown of just where we stand now. Several states refused to issue marriage licenses to anyone, the usual cast of political asshats vowed to find another way to ban same-sex marriage and continue their fine tradition of asshattery (I’m looking at you, Bobby Jindal), and we still don’t have the basic rights and protections we should be entitled to as Americans. And then came John Oliver, host of “Last Week Tonight,” who pretty much laid it all out in a scathing piece about the treatment of transgender people in America. We have so far to go.

We won a major victory, but there’s still a war going on. Even as Texas, Louisiana, and Mississippi are dragged, kicking and screaming, into the 21st century, we still face a number of glaring omissions. As Ted Martin, director of Equality Pennsylvania, observed:

“…Even while we are hopeful for the freedom to marry for all Americans, we are concerned for the LGBT community here in Pennsylvania where you can get married on Sunday and get fired on Monday just for being gay or transgender. So that’s why we are focused here in Pennsylvania on updating our law to be sure that all people who have the freedom to marry are also protected from discrimination at work, in housing, and in business services.”

Too right. So, what can you do? Well, for one, you can pick up your phone and call someone. No, for realsies…

This past Monday, I volunteered a few hours for Equality PA to join a phone bank and drum up volunteers. Have you ever called a perfect stranger and asked them to help pass a law that will protect your basic rights? It’s kind of unusual when you think about it. It’s even more unusual to think that other people, people you might not expect – heterosexual, cisgender people – are doing that for you. Yes, you, angry, oppressed, feminist, lesbian, trans woman, posting to Facebook about how “we should break off the T because the LGB doesn’t care about us!” Um, actually, they do.

People such as Ted Martin, Maureen Gray, and Barb McGee are, in my eyes, amazing allies to the T. They really care and are doing great work. Ted Martin, as mentioned earlier, is the director of Equality PA. Barb McGee is a retired teacher who has been volunteering her time for more than a year alongside Maureen Gray, field manager for Equality PA. Each of these people are true allies, and the work they’ve been doing is incredible. I sat next to Maureen and Barb on Monday evening as they walked me through the process of making calls, coaching me on what to say and how they do the job. Needless to say, I was a bit nervous, but I was able to quickly summon the confidence I needed and make that first call. “No big deal,” I told myself. “Just pick up the phone and dial. Say, ‘Hello.’ Be yourself. You talk about this stuff with your friends all the time; now, you just have to talk about it to someone else.” It was that easy.

I know we’ve had trouble with TERFs. I know quite a few so-called allies who really don’t “get it.” I know we’ve come under attack by our very own, of all people. There will always be an opposition that is against us, and much of that opposition will come from the people we least expect. We need to keep that in mind. I don’t believe we can actually afford to break off. And, as someone who also identifies with the L in LGB, this T wouldn’t know where else to stand. It just doesn’t make sense to me.

I am not generally an angry person. Believe it or not, I am extremely optimistic about the future. We can continue to wring our hands, make it “us vs. them,” and talk about breaking the T off from the rest of the acronym. But if we’re ever going to accomplish our goals, we’re going to have to put away past prejudices. We need to get out of the victim mentality that we often put ourselves in. Yeah, times are tough. We’re being murdered, bullied into killing ourselves, and ignored by the media. We make less money than the general population and are routinely denied health care.

But times are changing, and we need to change with them. We need to get on the front line. We need to get involved. We need to make sure our voices are being heard instead of letting others do the talking for us. And I’m not only speaking to the transgender community here. We are all at risk. There is so much at stake, and we are so close to breaking through. If you have the time and the inclination, please get involved. Equality PA is just one such organization that is doing incredible work. If you don’t want to get involved with them, find another org you do like. Or start your own. Whatever you do, do something to get out there and help people live their truth.

So, yeah. Yay! Marriage equality. This is huge; this is history. But we’re not done.