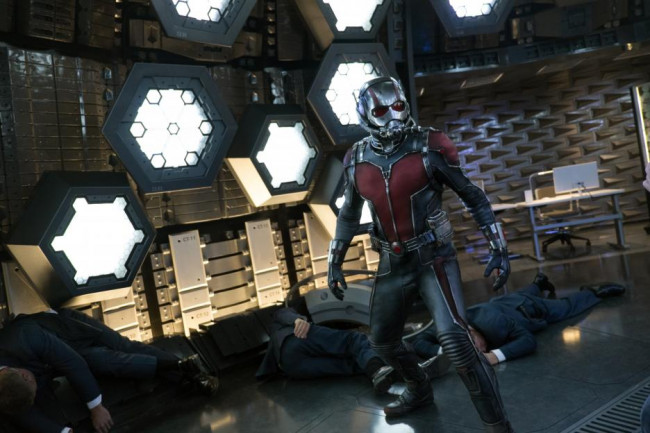 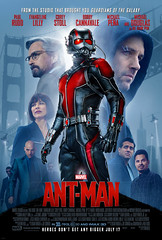 Much like the character itself, “Ant-Man” has surprised almost everyone.

For the second week in a row, it has topped the box office, even after another film aimed at family and geeky audiences, “Pixels,” opened this past weekend. That is partly due to the seemingly unstoppable Marvel Studios streak, of course, but positive reviews and word of mouth is helping too. If you’re one of those people who has been hesitating to see this one or waiting until video, just give in and see “Ant-Man” now. It’s probably not what you think it is, and that’s a good thing.

People complain about how all superhero movies follow the same basic formula, but then something like “Guardians of the Galaxy” comes along and subverts expectations; think of it like a well-made rollercoaster. You rode them before, and they’re all really the same idea, but sometimes a new ride takes a surprising turn or lets you feel something different that makes the wait and ticket price all worthwhile. That’s “Ant-Man” in a nutshell.

In fact, it’s the ride that many assumed wouldn’t work in the first place. Though he’s a founding Avenger and fairly important member of the Marvel Universe, Ant-Man hasn’t been mentioned on screen until now, mainly because there were much “cooler” characters to introduce first that were much safer movie investments. Though his powers are actually pretty effective, Ant-Man has been the butt of many jokes for decades, even in a classic “Saturday Night Live” skit, and because the character has changed so much over the years, with writers making him crazy and even striking his wife in a fit of anger in one infamous issue, not even fans were particularly anxious to see a whole movie dedicated to no one’s favorite Avenger.

Marvel played it smart, however, choosing the second Ant-Man, Scott Lang, as the film’s protagonist and letting Hank Pym, the original Ant-Man, serve as a mentor instead. Lang, in all honesty, is a more interesting person anyway, with a much more relatable backstory. Sure, Pym invented the “Pym particles” and specialized suit that allow a person to shrink to down to the size of an ant, and he even came up with a way to “talk” to insects and control them, but Lang is a single dad who is trying to redeem himself from a life a crime, stealing the suit from Pym when he runs out of options. We don’t really need another movie about a brilliant scientist becoming a superhero, and that’s thankfully not what we get here.

Instead, we get a fun-loving flick that doesn’t take itself too seriously, playing off the fact that Ant-Man is viewed as a lame superhero and giving you a reason to root for him. Scott is a master thief fresh out of jail and looking to get back in his ex-wife’s good graces so he can see his little daughter again. Unable to get hired anywhere with his criminal record, he joins up with his former cellmate and two other ex-cons to rob a safe in an old man’s house. All he finds is the Ant-Man suit, however, so he takes it and later tries it out, leading to an amusing scene where he’s almost drowned, stepped on by dancers, and killed from a fall. It’s only after this “trial by fire” that he learns that Hank has been watching him all along and needs his help.

Darren Cross is Pym’s former protégé who took over Pym’s company and is now weaponizing the shrinking technology. Hank’s daughter, Hope van Dyne, wants to be the one to steal back the tech and destroy all traces of it, but he wants Scott to do it so that Hope isn’t put at risk. The whole “I can’t tell you a vital piece of information because I love you and I’m protecting you” thing is getting old and needs to be stomped out like a pesky bug, but once the film becomes a heist movie, the fun factor far outweighs the clichés and silly plot holes as you watch the team break into Cross Technological Enterprises while avoiding security guards on the inside and cops on the outside.

In place of explosion-filled action sequences that have become ho-hum at this point, especially during summer blockbuster season, “Ant-Man” is filled with inventive fights and special effects peppered with humor that are genuinely creative and interesting to watch – from battling in a suitcase that is falling from a helicopter to tearing apart a kid’s bedroom and using Thomas the Tank Engine as a weapon, all while shrunken down to the size of ants, it’s serious one minute and hysterical the next. It’s a shame that the villain, who calls himself Yellowjacket, is yet another evil rich white guy who uses the hero’s own powers against him – the Marvel Cinematic Universe has too many of those already, mostly in the “Iron Man” films, and if a hero is only as good as his villain, then in this case, Ant-Man lives up to his also-ran reputation.

Paul Rudd is able to bring enough snarky personality and likeability to Lang, though, that it doesn’t really matter in the long run, as we get to know him more out of the suit than in it. Michael Douglas is the perfect choice for Pym, adding weight and a believable history of badassery to the Ant-Man legacy, but his partner, the Wasp, and their daughter are sidelined to let these characters shine. This doesn’t bode well for those who rightfully wanted to see some more strong females front and center in this ever-growing Marvel franchise, but at least Hope is left with hope that she’ll play a bigger role down the road.

As noted, “Ant-Man” has its flaws, but when looking back on the storied history of this production, losing original writer/director Edgar Wright before Rudd and Peyton Reed stepped in to save it, it’s a miracle that this movie is even coherent, never mind good, in the first place. While not quite as solid, it does rank up there with the first “Iron Man” film and invokes the same inspired energy and wit that Jon Favreau’s movie did seven years ago. Even the obligatory cameo by an Avenger doesn’t feel tacked-on so much as it does good-spirited fun, and that’s a word that continues to come up in this review.

“Ant-Man” is just too fun not to see, unless your intent is to pick it apart, in which case your magnifying glass will easily fry this little guy. Kick back, enjoy, and leave a few kernels of popcorn on the floor for our six-legged friends. While it’s already considered a success, “Ant-Man” is still Marvel Studio’s lowest grossing film since the lukewarm (and frankly unfair) reception “The Incredible Hulk” received in 2008, so toss this one a few bucks so more unique properties are green-lit. Ant-Man will never be quite as popular as Captain America or Iron Man, but you’ll be astonished by what an incredible shrinking man is capable of.