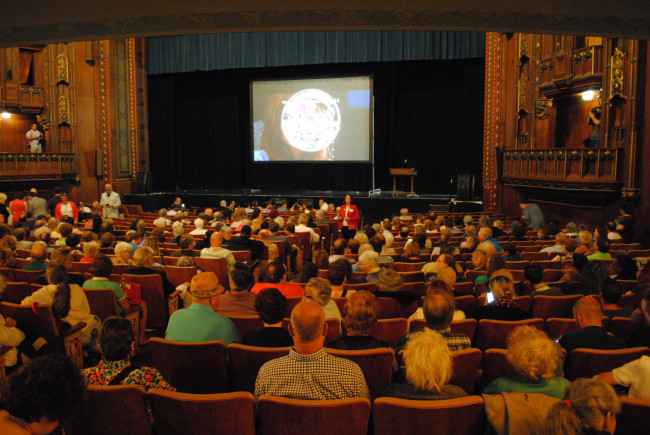 At the free local premiere of “The Trouble with Cali” on July 9, the seats of the Scranton Cultural Center were a little over half empty.

Or, if you’re an optimist, it was half full, but with all the press regarding the shady production and belabored release of this taxpayer-funded running joke, it’s hard to look at the bright side of anything involved with this film.

This review hopes to change that. After all, some films just need context.

From “Reefer Madness” to “Troll 2” to “Birdemic” to anything by the “worst director of all time” Ed Wood, bad movies of any generation can become cult classics simply by watching them within that context. If someone slaps down their hard-earned money to see a movie after a long week, hoping it will take them away from their troubles for two hours, and it sucks, that can be frustrating because they feel ripped off, expecting one thing and being forced to sit through another. Film buffs and B-movie fans will line up around the block, however, to purposely watch bad films, with or without “Mystery Science Theater 3000” or RiffTrax commentary, because they’re fully aware of what they’re getting themselves into, reciting every stupid line and reveling in every cheesy flaw.

That is exactly how “The Trouble with Cali” should be viewed, and it was by many on Thursday night. Lackawanna County Commissioners Edward Staback and Patrick O’Malley who, along with Commissioner Jim Wansacz, finally convinced director Paul Sorvino to hand over a few Blu-ray copies for public screening, introduced the film by taking little jabs at it, but remaining fair. Staback subtly told the crowd to “enjoy the popcorn,” not necessarily the feature presentation, while O’Malley outright admitted that it was a “horrible investment,” but noted that “whether it’s good or not, this is our investment” and that everyone should try to kick back and just give it a chance. Granted, their predecessors who approved that $500,000 mistake, Robert Cordaro and A.J. Munchak, made that decision for everyone, but they ironically don’t get to see the finished product, as they’re currently busy serving time in federal prison on unrelated corruption charges. Those present at the screening had heard about the bad reviews and failed attempts at studio distribution – they knew what to expect after all these years, at least partially.

Well, most did, anyway. Some people walked out after about 20 minutes, but those who stayed consistently laughed through the entire running time of what is billed as a drama. There’s drama, sure, but the over-the-top acting here makes soap operas look like Shakespeare.

In fact, after years of theatre roles and opera singing, Sorvino may fancy himself as a Shakespearean actor in a Shakespearean tragedy, as written by his daughter, Amanda Sorvino, but the stiff dialogue and awkward situations in the movie leave the actors floundering about, sometimes literally, and grasping for something natural to adhere to. No main character in the film seems to react or talk like anyone actually would in any real-life situation, making it utterly impossible for the audience to sympathize with them – or take them seriously.

The movie opens with some standard narration by a character who can barely deliver a line without slipping into a stereotypical “Italian guy” voice, à la Rocky, before introducing the titular character, Cali Bluejones. Played by Laurence Leboeuf, she is picked up by Vail Bosenthall (Chris Meyer) at a bar as her parents Avie (Glynnis O’Connor) and Ivan (Paul Sorvino) look on, establishing right away that everyone in this town must come from an alien race that has never heard of simple names like Joe Smith or Mary Jones.

Rejecting her advances in bed later that night, Ivan tells Avie that he no longer loves her, but as their fighting intensified, so did the laughter from the audience. By the time O’Connor slurs a few more words and pulls out a bottle from the bedside table, this crumbling marriage better resembles a failing high school acting class. It’s difficult to decide which actor is worse as they both progressively attempt to top each other – O’Connor plays an alcoholic like someone who has been sober for their entire life, and Sorvino tries too hard to make the material seem like more than it is, digging deep with excellent lines like “Stand up! Stand up, I say!” and “Don’t listen to her! Ahh!” Ivan starts hanging out with young boys and dancing with them while eating a bowl of cereal, Avie dramatically yells “Betrayal!” and bursts into the room when she overhears a conversation she doesn’t like, and it only gets weirder from there.

Meanwhile, Cali and Vail are just as strange and dysfunctional. She’s a beautiful young girl who wants to lose her virginity, and he’s a disinterested older guy who tells her to stop thinking about sex so much – in other words, totally believable. He buys her the necklace from “Titanic” and then bumps a line of coke in a helicopter, they have a bizarre conversation about marriage that gets “too fucking complicated” in just two minutes, he cuts her underwear with a knife and goes down on her against the front door of her house, and she dresses like a goth girl in just one scene for absolutely no reason.

It’s quite a while into the film before they suddenly establish that it has been Cali’s lifelong dream to be a ballerina, even though there was no mention of this before, as the focus has been on her budding modeling career up until then, which leads her to get dressed up as Cleopatra for the cover of Cosmopolitan because, sure, that’s what they put on their cover now. Paul’s other daughter, Mira Sorvino, plays the handicapped “Balletmaster” or, as the dumb narrator calls her, the “leotard lady on wheels.” The plot shifts as frequently as the tone, and the lack of color grading and sound mixing in some scenes is as distracting as the mismatched music in almost every scene. It’s probably safe to assume that they never received permission to use that song playing during the party scene either, which is listed as “Paramore” by Misery Business in the credits. We’ll give you a minute to figure out what’s wrong there as we get into spoiler territory, so skip the next paragraph if you don’t want to read about anything that could sully this riveting tale for you.

The only thing worse than all this is the editing, which barely strings together a series of scenes that either feel incomplete or way too long. It’s possible that some scenes were never shot or completed due to the budget running out, seemingly filled in with baffling dream-like sequences, but that’s no excuse for the totally unnecessary rape scene. Oh yeah, there’s a rape scene among this mess, and it makes zero sense, as Cali is undeniably ready and willing to have sex with Vail, so he responds by drugging her, punching her, and throwing her onto the bathroom floor to hump her unconscious body. It could be offensive if it wasn’t so completely misplaced, leaving the audience gawking and wondering what could possibly be next.

We won’t give away the ending for you, but let’s just say it’s like a “mad cow in a mucky field” – yes, that’s an actual line in the film, and we still don’t know what it means. In other words, it involves guns, horrible gold makeup, horseback riding, poetry read in hospitals, flasks, Angus burgers, and hypoglycemia – OK, that doesn’t make any sense either. Just stop trying to figure it all out and enjoy the ride.

That’s what all of Lackawanna County and Northeastern Pennsylvania should do, actually. While Sorvino will never admit that he simply made a bad movie, let’s all accept that he did and embrace it. Many audience members walking out compared what they watched that evening to “The Room,” an indie drama from 2003 that developed a cult following for its melodramatic acting, inexplicable character motivations, and shoddy direction – all the same issues that “The Trouble with Cali” suffers from. It’s often as entertaining as Tommy Wiseau’s disasterpiece and has all the makings of a cult phenomenon, particularly with the insane production – and all its twists and turns – that is uniquely NEPA; it’s the kind of background trivia that film nerds eat up.

So let’s not be angry or disgusted anymore – what’s done is done and that $500,000 is long gone, never to return. What we have instead is a new cult classic that we should screen publicly at least once a year, maybe with live running commentary from comedians or a shadowcast, or just release into the public domain so that everyone can laugh along with us. Despite the many harsh words expressed in this review, we sincerely recommend seeing it tonight or tomorrow for free at the Scranton Cultural Center (420 N. Washington Ave., Scranton) at 7:30 p.m. or renting it from the Albright Memorial Library (500 Vine St., Scranton) next door soon after. Movies are supposed to be entertaining, and “The Trouble with Cali” is certainly that, if nothing else.

We may not ever celebrate “Cali” like Phoenixville celebrates “The Blob” every year, but at least it isn’t a total loss – we now have a mad cow in a mucky field, and who doesn’t want one of those?

Or maybe we don’t. We’re still not sure about that one.

‘The Trouble with Cali’
Rating:

Ratings on all album and movie reviews are based on a scale of 1-5.