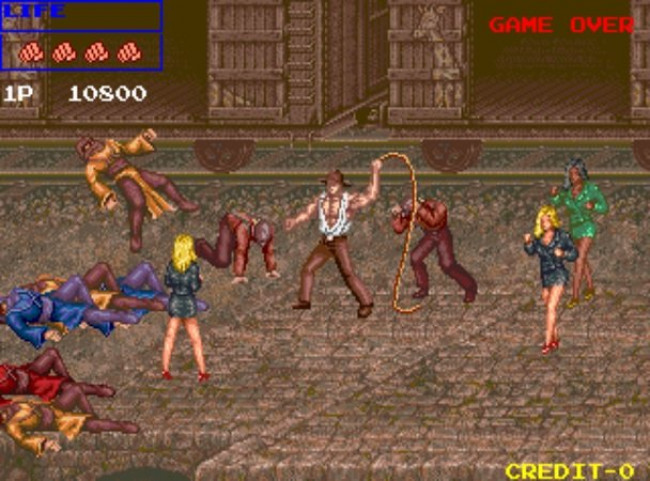 Here at Turn to Channel 3, I’m all about those games that may or may not have had something controversial in it, depending on your opinion. Certainly we’ve all heard about those legendary lightning rod games that changed the face of the industry or even played a role in creating or fine-tuning the video game ratings system as we know it, but today, during the month of July (or, as I am calling it, “Why Isn’t Nick Outside?” month), we’re going to take a look at a game that your loyal and faithful scribe played once as a kid and didn’t really flinch, only to later play and say with confidence, “I have no idea how that slipped past parents and critics at the time.”

Today, retro gamers and wildlife conservationists, we’re going to look at “Growl,” a game created by the folks at Taito in 1990, before gaining a Sega Genesis port in 1991 and later a spot on the classic compilation “Taito Legends” for the PlayStation 2 and Xbox. The focus of the review will be on the original arcade version. So what happens when a group of turn-of-the-20th-century wildlife avengers fights to defend their animal friends against evil poachers? Well, let’s find out!

While there isn’t a distinct sound to “Growl,” nothing that makes it iconic in the eyes of many gamers, the soundtrack is still quite good; I’d even go as far as to say that it’s one of the very best for Taito arcade games, carrying this mix of epic thematic tunes as well as some high tempo, high adrenaline stuff.

Obviously, games like this are big in the sound effects department, and one of the first things you notice in “Growl” are the voiceovers, which are amazing for the time. They are distinguishable, they are easy to understand, and the villains just sound like awful people, while your heroes sound cool. They’re almost kind of cheesy and forced in their delivery but, again, voiceovers in arcade games weren’t a big thing in 1990, so just the fact that they’re there is impressive enough to me. The obligatory explosions are there, along with the sounds of guns, whips, and pretty much whatever your character can find to throw at someone. This is one of those games where if your character got to throw the kitchen sink, you’d appreciate the pun.

For an arcade game, the graphics aren’t super impressive in detail, but with the sheer amount of enemies filling a screen without lag, it still looks great and pretty darn impressive. While I feel the enemies should have had more depth than just color changes, this is something fairly common in games like this during that era. I did find the bosses quite interesting all the way through, and the levels, while not super colorful, fit that gritty style the game shoves right in your face from the very beginning. The cut scenes at the beginning are pretty cool as well.

There’s no question that “Growl” is a blast to play, especially with friends, as there are as many enemies as the game can cram onto the screen at certain points, sometimes in a seemingly endless barrage, and the variety of weapons as well as assists from animals you’ve rescued is fairly remarkable for a game made in 1990.

We could discuss the difficulties of the bosses in the game, but for me, the bigger topic at hand would be the fact that you can beat up women in this game. Now, look, I know we’ve all played “Double Dragon” before, but comparing the women in this game to those in “Double Dragon” is like comparing European supermodels to female bodybuilders. What I mean by that is the women in “Growl” are, first off, dressed in what look like 1980s work clothing – the business attire, the skirt, the heels, all of that – and I just feel so bad as I go through the game beating these women up, hitting them with whips and blowing them up.

Speaking of blowing things up, whenever you do use certain explosives in this game, you actually see the chunks of your enemies rolling around on the ground. How this game didn’t become a lightning rod for controversy among parents with their kids at the arcades is beyond me. I get it, the women are part of the group of poachers and evil people trying to hurt animals, but is the answer to that really beating them up? At one point, one of the women actually threatens you by calling you a sucker, and I don’t know about you, dear reader, but if a woman called me a sucker, the last thing I would do is throw a grenade at them. All of this aside, the game is challenging, while still keeping you entertained and interested, and that’s what matters most.

While Taito has made some great games, in the arcades as well as on consoles, they always seem to get this second or third place focus from gamers, which is unfortunate because while, yes, Konami and Capcom made some great arcade titles, along with companies like Midway, you’re doing yourself a disservice to ignore some of Taito’s greatest arcade hits, which certainly includes “Growl.”

While I feel the message of the game is certainly lost in translation (let’s hurt people for hurting animals while saving animals who then hurt people?), the basis of this game is just as sound as any brawler out there in the arcades. “Growl” really doesn’t need the fanfare other arcade titles get because it punches you right in the face with the action right from the start, and it’s kind of like playing through a really cheesy B-movie, so if you’re into that and don’t mind beating up secretaries, then by all means, give “Growl” a shot.

I still feel kind of dirty about the whole beating up women thing in this game. It’s a good thing that next week we are journeying into a mystical game on the Sega Genesis that really caught me by surprise as a kid, and I’ve come to learn for good reason.

Until then, keep that coffee brewing for me as I attempt to keep cranking out more stuff for you here on Turn to Channel 3! Game on!