TURN TO CHANNEL 3: ‘Super Dodge Ball’ is a super fun direct hit on the NES 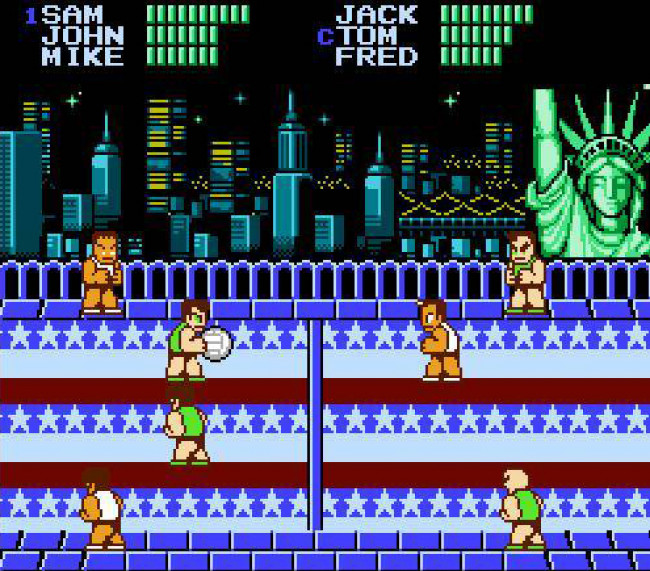 As a kid in North Scranton, I was lucky to live in a time where it was safe to be outside, enjoying games of football, baseball, basketball, and kickball, just to name a few. Despite this, there were still moments where I spent a lot of time indoors when I probably should have been outside playing with friends.

There were wiffle ball championships my brother and I had to win, or moments like watching my buddy Tim Duggan get a basketball stuck perfectly between the rim and the backboard of a hoop, but I just couldn’t be pulled away from some classic games, so this month we salute a few of them in what I like to call “Why Isn’t Nick Outside?” month here on Turn to Channel 3, because even today, at 34 years of age, instead of taking a walk or at least hanging out on my porch and enjoying the nice weather, I’m inside playing these titles and many others.

Speaking of being a kid, by a show of hands, how many of you enjoyed dodgeball back in the day? Good, good. Now how many of you enjoyed hitting people who had no business playing dodgeball and could care less about the whole thing as hard as you could with the ball? NEPA Scene would ever condone the actions of beaning someone with a dodgeball, but at the same time, we certainly don’t condone people being a big stupid airhead for no good reason, and is there ever really a good reason? Anyhow, this month’s first entry is “Super Dodge Ball” for the NES. If you’re wondering why a game not on the SNES was called “Super Dodge Ball,” well, you’re putting too much thought into it and may need to also get hit with a dodgeball. Did I mention that dodgeball brings out this inner rage within me?

So what makes an 8-bit game about dodgeball so super? Let’s find out!

Despite the fact that some of the music found in “Super Dodge Ball,” as you go from country to country, borders on racial and ethnic stereotypes, it is quite good when you ignore that. Tying into it, you have the music that plays when you win a match, but with a game that’s all about action, you know that the sound effects are what really matter here, with the variety of sounds heard when a player uses their special throw to the sound of a player getting hit with the ball. All of it works so well together and is done in a way that is subtle enough not to get annoying, but still fun to hear during the duration of a match.

Keep in mind, there were very little, if any, blueprints for developers to go on with a game like this. This wasn’t a longstanding series of games prior to being created. Developers were working largely from scratch, trying to piece together a game that would be pleasing to those who enjoy dodgeball or just fun and entertaining games in general, and the soundtrack sets the tone.

Looking at the sprites, chances are most hardcore retro gamers will know where they’ve seen this style before. Technos, the company behind the smash hit “River City Ransom,” were also behind this title, so you’re greeted with these small, stubby-looking Japanese animation-style characters, despite some of them being on teams that have nothing to do with Japan, but the style works well for the game because you’re not taken away from the ball or the game itself – these are just props, pieces to get the ball to where it needs to go.

For me, the most impressive part of the graphics is the ball itself, whizzing by, pelting people in the stomach, the face, what have you, and this is further illustrated by the super shot, which is when a player turns the ball this glowing orange color before it takes a variety of directions and speeds towards the adversary. Some of the best ones are when the ball slows down before hitting the enemy as hard as it can, lifting them into the air, or when you’re just doing a standard but deadly balls-to-the-wall high-speed throw. You almost feel bad taking out several characters at once with some of these power throws, but then you realize they are pixels and watching them fly all over before turning into these cute little angels is both hilarious and gratifying in some perverse way.

The levels are all well-done, once again with some riding the fence of good taste and stereotypes, but they are all well-designed, and some come with the addition of changing your game up a bit, with levels that have ice or smaller fields where you can’t always get that top speed run to use a special shot.

Despite the need for timing in perfecting those super shots, once you get the hang of it, you can pull them off with ease, and blowing through teams with them, strategizing your roster, all of it makes for an amazingly fun game all the way around. There is some getting used to, figuring out which button passes and which one fires the ball at an opponent, but I still found none of this so frustrating that I didn’t want to play the game.

The amount of teams (including a bizarre doppelganger U.S.A. team at the end) is just enough to make you feel accomplished while not dragging on so much that you’re bored. While the characters all have these terribly stereotypical names, it doesn’t change the fact that this is a fun pick-up game with simple controls that is a blast to master.

“Super Dodge Ball” is a game that many people didn’t turn out in droves for during its debut, but it has reached near cult status on the collector’s market, earning a hidden gem mark in the opinion of many retro gamers, and I’m not going to argue. If you love to play games that make you think of warm weather and beaning annoying classmates in the head, then this is indeed a game for you. It’s OK, you can admit you too enjoyed beaning classmates. “Super Dodge Ball” is becoming a bit harder to find, despite not having a huge price tag on it. If you enjoyed games like “River City Ransom” on the NES, and arcade classics like “WWF Superstars” and “WWF Wrestlefest,” all of which were also done by Technos, then you will want “Super Dodge Ball” to add to your catalog of fine games made by the company.

Well, that does it for me this week. Tune in next week when we go back to the arcades to a game that was certainly controversial for its time, despite the fact that few kids or even parents blinked an eye.

Until then, keep that grill going, but please, for the love of Pete (and Pete?) stop lighting off fireworks – the 4th of July is over and dogs and cats hate you right now.

Oh, and game on, of course.