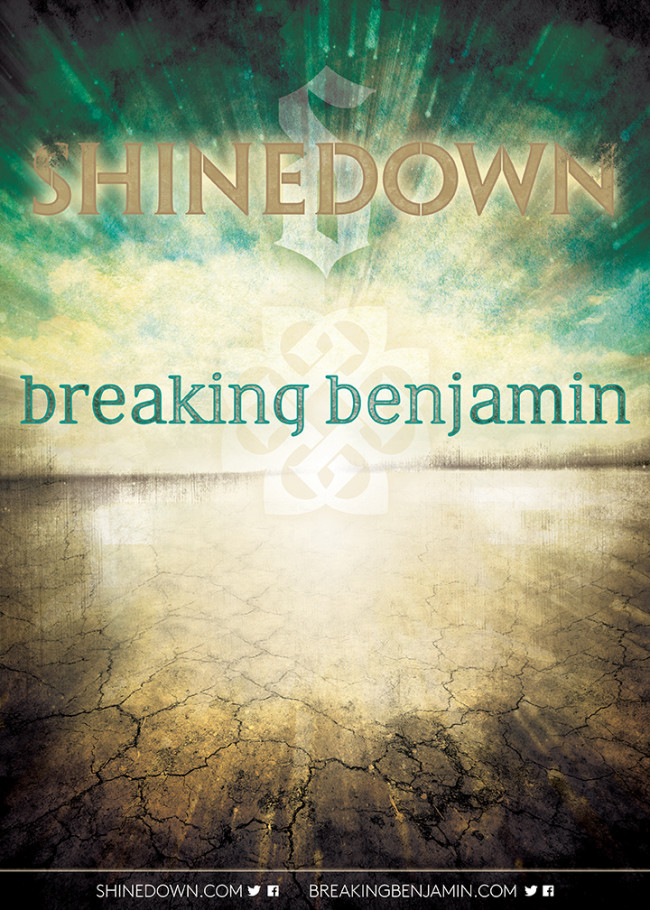 The cross-country trek kicks off on Oct. 16 at Wichita, Kansas’ Intrust Arena and continues until the tour finale on Nov. 24 at Portland, Maine’s Cross Insurance Arena, with only one stop in Pennsylvania in between – the Bryce Jordan Center in State College on Nov. 20 with Sevendust, who are opening for Breaking Benjamin on Sept. 18 in Scranton just before the tour.

In other touring news, Shinedown and Breaking Benjamin are also among the top-billed performers at Monster Energy Aftershock 2015 in Sacramento, California on Oct. 24.

Known worldwide for their unparalleled streak of hits, Shinedown is one of the most successful rock bands of the 21st century. The multi-platinum group’s forthcoming fifth studio album, “Threat to Survival,” arrives Sept. 18 and features the chart-topping lead single “Cut the Cord,” which stands tall at No. 1 on the Active Rock radio chart for its third consecutive week. The band’s unmatched ascendancy over multi-format rock radio commenced with their 2003 debut, “Leave a Whisper,” and the 2005 follow-up, “Us and Them.” Together, both albums yielded seven consecutive top 5 radio hits, including the No. 1 blockbuster “Save Me.”

Released in 2008, “The Sound of Madness” proved to be Shinedown’s mainstream breakthrough, debuting at No. 8 on the Billboard 200 before spending 120 consecutive weeks on the chart. The album made rock history, with each of its six singles reaching No. 1 on the airplay rankings, including the double-platinum certified crossover smash “Second Chance,” which also went to No. 1 on the Hot AC chart and top 3 at Top 40. “Amaryllis” followed in 2012 and immediately entered Billboard’s “Rock Albums” chart at No. 1 while also coming in at No. 4 on the overall Billboard 200 – the multi-platinum group’s biggest chart debut thus far. The album spawned a trio of massive hits in “Bully,” “Unity,” and “Enemies,” all of which reached No. 1 at Active Rock radio, bringing Shinedown’s tally of consecutive chart-toppers at the format to an amazing nine and counting. In addition, two additional singles from “Amaryllis” – “I’ll Follow You” and “Adrenaline” – both reached the top 5 at rock radio, furthering Shinedown’s extraordinary streak of top-charting singles.

Over the past decade, Wilkes-Barre’s Breaking Benjamin has amassed a sizeable and diehard fan base, both through their chart-topping music as well as their electrifying live performances. Their discography includes 2002’s “Saturate,” 2004’s “We Are Not Alone,” 2006’s “Phobia,” and 2009’s “Dear Agony.” The second two – “We Are Not Alone” and “Phobia” – yielded spectacular results, with each being certified platinum.

“We Are Not Alone” spawned a pair of No. 1 radio hits (“So Cold” and “Sooner or Later”) and sold 2.3 million units (albums and digital tracks). “Phobia debuted” at No. 2 on Billboard’s Top 200, hit No. 1 on the Rock Album Chart, and was one of the Top 50 selling rock albums of 2006. It featured one No. 1 and two top 5 rock radio hits (“Breath,” “Diary of Jane,” and “Until The End”) and sold 2.8 million units. 2009’s “Dear Agony” debuted No. 4 on the Billboard Top 200 chart on one of the busiest release days of the year and No. 1 on the iTunes Rock Album Chart. “Dear Agony” also spun off the platinum-selling and No. 1 song Active Rock single “I Will Not Bow,” where it stayed No. 1 for five weeks straight while the album itself was certified gold, selling over 500,000 copies. Continuing that success streak, their latest album, “Dark Before Dawn,” debuted at No. 1 album on the Billboard Top 200 chart in the U.S. last month.

Known for their incendiary live performances, Breaking Benjamin returned to the road earlier this year with a sold-out club tour, U.S. headline dates, and performances at this year’s biggest rock festivals, including Rock on the Range, Carolina Rebellion, and Rocklahoma.