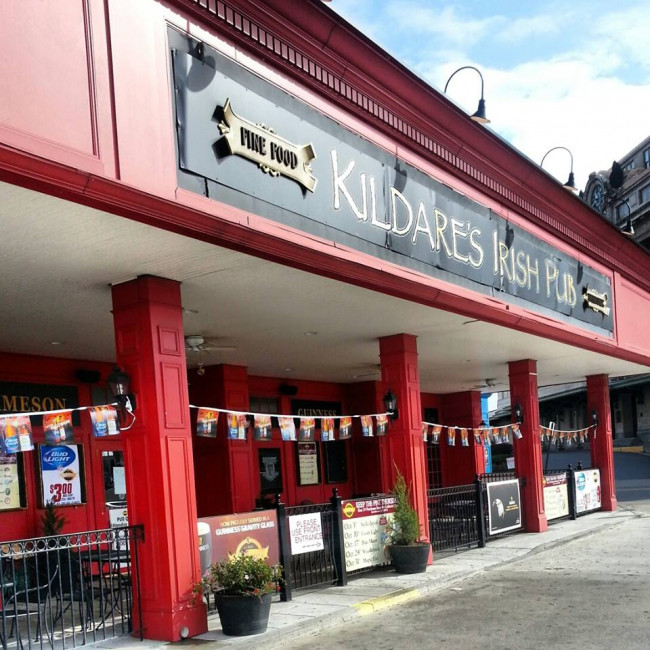 Gender identity and restroom usage has been a hot topic lately. As transgender awareness and visibility increases, it’s only reasonable to expect that people are looking out for us more than ever, and that means a false positive report was bound to happen sooner or later. Well, it finally did.

According to her Facebook post on Aug. 8, Julie Bidwell was out with her girlfriend, Heather Hess, enjoying a few drinks at Kildare’s Irish Pub in Scranton when things took a terrible turn:

“I was kicked out of my first bar tonight.. Well, allowed back in after i argued with the bouncer who kicked me out..

I went to the bathroom with a friend, then came out to a bouncer saying i had to leave bc men arent allowed in the girls bathroom.. I had to plead with him for almost a minute that i was a girl.. I was sober when it happened, n i am embarrassed enough to never go back.. The manager was even a bigger jerk than the bouncer… Kildare’s in Scranton, i will never come back, thank you.”

Despite the fact that it’s no one’s business, and that no one deserves this kind of treatment regardless of how they identify or present, it’s important to note that Julie is a cisgender woman, not transgender. Not that it would have mattered, as the city of Scranton has a policy in place that would have protected her either way. Scranton passed such an ordinance almost 12 years ago. Chapter 296, under Human Relations and Discrimination, Ordinance No. 243-2003, adopted by city council on Dec. 8, 2003, explicitly grants the use of public facilities regardless of gender identity.

Now, it would be easy to write off Kildare’s management as ignorant and insensitive, but they maintain that they were responding to a complaint made by three other women who thought that there was a man in the bathroom and were concerned. Kildare’s management immediately took action to check up on the claim and ensure the safety of all their patrons. However, they have since admitted that it was handled poorly and that the staff could have been more sensitive to everyone involved.

Since Julie’s Facebook post went viral, Kildare’s privately contacted her to apologize – both the management of Kildare’s of Scranton and its parent organization, the Dave Magrogan Group of West Chester, Pennsylvania. They then posted a public apology on their Facebook page, as follows:

At Kildare’s we take the equality and safety of all of our guests very seriously. We respect and promote the diversity of our employees, our guests and our company. We have actively supported equality for all philosophically, publicly and politically in the State of Pennsylvania and on National platforms. This weekend three female guests sought out our staff and security because they were concerned that there was a male patron in the female restroom. Our security staff was required to investigate the situation and determine if there was a male guest in the female restroom because of the guest complaints. Our security staff could have handled this very delicate situation with more sensitivity and respect. We apologize if we offended our guest or members of the LGBT community. It was not our intention. Our intention was to follow up on guests reports that a male patron had entered the female bathroom. This was in no way a statement of our political beliefs. We fully believe in equal rights and freedoms for all of our guests and employees. Our staff could have handled this situation in a better manner and we have apologized to this guest for the uncomfortable situation and pain this has caused her. We are so very sorry. Our staff and management will review better methods to handle these sensitive issues in a manner that respects the rights of all people and also ensure a safe environment for our guests.

There’s definitely something here worth making a statement about. The staff of Kildare’s, like anyone else, are only human, prone to making mistakes. And while choosing to discriminate based on appearances is a pretty big one, it’s difficult to find a suitable solution short of carding everyone prior to entry. As such, people are going to get hurt. From images on her Facebook page, Julie makes it clear that she doesn’t often dress the part of a “girly girl.” She seems much more comfortable with herself wearing short hair, t-shirts, and loose-fitting jeans – and there’s nothing wrong with that. She has the right to dress and appear as she chooses – no victim shaming here. No woman is “asking for it” when they wear tight, revealing clothes. No woman is any less beautiful for not wearing makeup, or even choosing to wear makeup. No woman is any less than a woman if she identifies as one, regardless of anatomy, facial features, lack of hair, expression of self through tattoo or body modification, or anything else she decides to do with her body. No one deserves that kind of treatment. Whatever the details of what really happened that night, it’s only a matter of time before this happens again somewhere else. I’m glad to see that Kildare’s, at least, is taking these accusations seriously and giving the staff at each of their locations more sensitivity training to ensure this doesn’t happen in their establishment again.

Women are often made to feel invalidated by the actions and words of those around them, and it’s sad to see how often they are shamed for speaking out, so it is very welcome to see Kildare’s owning up to this publicly and responsibly. For me, personally, this is the kind of situation I fear I will find myself in someday, and I hope I can handle it with grace and candor. For the record, I have been to Kildare’s in Scranton, and I was not approached by any member of the staff or harassed by any of the other patrons during my stay – even when I did excuse myself to use the women’s restroom. All I know is that I use the bathroom that fits the gender I identify with, and when I go in, I have only one thing on my mind: I just need to pee.

Note: When contacted, Julie Bidwell offered the above photo of herself to NEPA Scene and was willing to discuss the incident privately, but she was not at liberty to disclose any further information publicly.