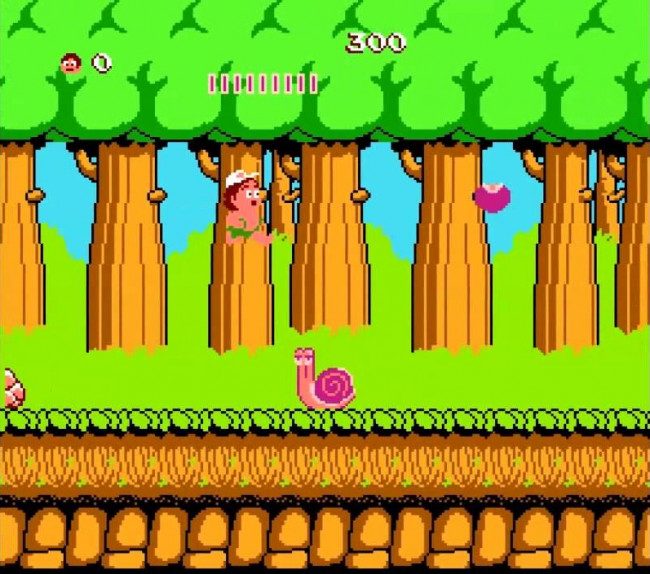 Welcome to yet another Turn to Channel 3, and man, can you believe it’s already August? In time, many will be returning to school, while others, like myself, will be laughing at them because I no longer have to do that (re: I can’t afford to). With that in mind, I bring you four games that I always tried to cram into the last few weeks before school in what I like to call “Oh Poop, School Is Coming” month.

Today, we begin with the first non-Mario or non-Zelda related game I ever played on the Nintendo Entertainment System, a little number you might remember called “Adventure Island” from the fine people at Hudson Soft. I can still remember the first time I sat down to play this game at my cousin’s house, when I realized I would be a devoted NES player for many years to come, but like a lot of people who describe the very first game they ever played not sporting an Italian plumber or a pointy-eared lad with a Master Sword, many have wondered just what makes this game so intriguing to me past the whole nostalgia factor.

Better yet, I am wondering myself if this is a game that has stood the test of time. Let’s journey with Master Higgins on “Adventure Island!”

It’s a pretty common rule in the realm of retro gaming that if you’re going to leave a lasting impression on a gamer, if you even want to compete for memory space within the mind of a man child (card-carrying member right here), you need to have charming and catchy music that, as soon as someone hears it, he can instantly recognize as a track from the game’s soundtrack, and “Adventure Island” is all over that. From the summertime island tracks to the cave, mountain, and nighttime levels, there’s something there for everyone, and if that’s not enough, the invincibility and what I like to call “evil eggplant” music are great compliments to an already stellar soundtrack.

“Adventure Island’s” soundtrack isn’t over the top, but it doesn’t need to be when it gets the theme and environments of the game across without really having to flex its muscles to do so. Obviously, there are some great sound effects to accompany it, from the throws of the axe and fireballs to leaping enemies, just to name a few.

Where “Adventure Island” hits a bit of a wall is first in the graphics department. This isn’t to say that the creatures in “Adventure Island” are not interesting, but like the levels, there just isn’t enough variety to keep most gamers interested. When you can easily name most enemies, that’s a problem.

One of the best examples of this lack of variety would be the bosses in the game, as each night level has you facing a giant monster that is only different from the type of head it has, and what’s worse is once you defeat them, you can actually see the next head that’s to come. While many NES titles can be given flack for a lack of variety, in “Adventure Island,” it almost seems like they weren’t even trying, or felt the very graphics they offered would be enough. It really isn’t, unfortunately, which is the first of two major drawbacks in the game.

As I said, the bosses are all the same in appearance, but it doesn’t stop there, as they all have the same boring pattern of attack. While it would be enough to just look at this and be disappointed, what makes it so sad is how hard you work to get to the night levels, which are a breeze in comparison to others – the ice portions of cave levels and the mountain levels most notably. “Adventure Island” also seems to rely on the same few levels, with few alterations, so when you’re trying to get gamers away from their Mario and Zelda games, this isn’t really going to help you convince anyone.

The game is a nice balance of challenging levels and easy ones but, again, there just isn’t enough to allow a full experience, and when it seems “Adventure Island” has done it, once again the same boss is in front of you and you’re left wondering why you even bothered playing through all those levels.

It really was a sad day for me to realize that “Adventure Island,” while having some great sequels, has an original game that truly hasn’t aged well, at least not overall. I still fondly remember and once again enjoyed the fun and upbeat soundtrack, along with some good sound effects. While watching Master Higgins skateboard and leap from cloud to cloud was a lot of fun, I still shake my head at the lack of variety in levels and bosses, which I will always say is the one thing that keeps “Adventure Island” from ascending to the levels of classics like “Metroid,” “Kid Icarus,” and “Castlevania.”

The core of the game is just as entertaining as it has always been, but if you’re looking for a complete game, one that will keep you busy for hours instead of beating you over the head with the same premise, then you will want to skip “Adventure Island.” We’re still buds, Master Higgins, just not best buds like when I was a kid.

I hope you enjoyed this look back at “Adventure Island.” Join me next week for a column on a true Genesis cult classic that still makes people happy even after this time.

Until then, ignore those back to school ads and, as always, game on!