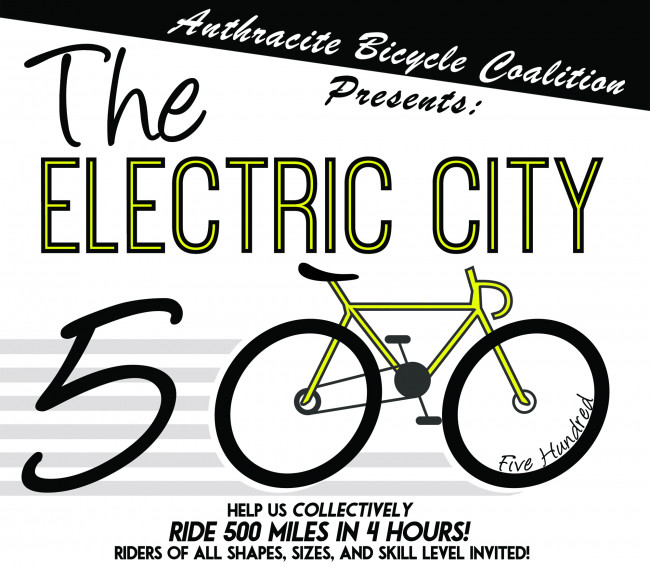 Bicycle enthusiasts are invited to ride together to log 500 miles in downtown Scranton during First Friday in October as part of the Electric City 500.

Members of the Anthracite Bicycle Coalition and their partners announced plans for the special event to encourage bicycle riding and safety in the greater Scranton community. Cyclists of all skill levels and abilities are invited to join in the fun on Friday, Oct. 2 between 5 p.m.-9 p.m. on Courthouse Square in downtown Scranton. They may ride their own bicycles or borrow bikes through Bike Scranton, a free bike share program hosted by Lackawanna Heritage Valley. Anyone 18 or older who presents photo identification is welcome to borrow a bicycle from the Bike Scranton tent on North Washington Avenue during First Friday.

In addition to bicycle enthusiasts enjoying a spin around a marked course on Courthouse Square, the Electric City 500 will feature music, art, pop-up bike lanes, a bicycle pump track provided by Dellavalle Designs, and a skate park hosted by the West Scranton Hyde Park Neighborhood Watch. PennDOT will also host an exhibit detailing the history of transportation at the Hilton Scranton & Conference Center (100 Adams Ave., Scranton).

“We’re hoping to raise awareness of cycling not only for recreation, but as a transportation alternative,” said Tom McLane, president of the Anthracite Bicycle Coalition. “We also want to educate cyclists, runners and pedestrians about roadway safety and give people a chance to experience cycling on city streets on a safe path as a way to advocate for bike lanes in the city.”

Those who want to show their support for such endeavors will have a chance to sign a petition at the event.

The Electric City 500 is made possible through a partnership between the Anthracite Bicycle Coalition, Lackawanna Heritage Valley, Lackawanna County, the city of Scranton, PennDOT, Cedar Bike & Paddle, Scranton Tomorrow, West Scranton Hyde Park Neighborhood Watch, and the University of Scranton.