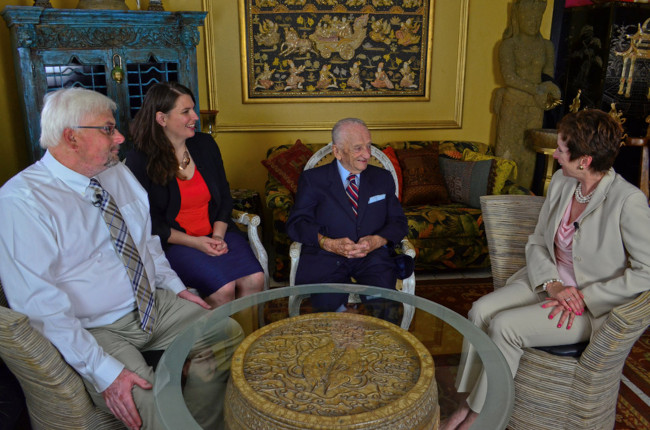 The Departments of English and History and Government at Misericordia University in Dallas are presenting a newly produced documentary with the only surviving member of the prosecution team of the Trial of the Major War Criminals before the International Military Tribunal in Nuremberg, Germany on Tuesday, Sept. 22 to mark the 70th anniversary of the trials at the Palace of Justice that began in November 1945.

The documentary, “An Interview with Benjamin B. Ferencz,” is among a series of programs that will be offered by Misericordia University during Mercy Week from Sept. 20-26 to celebrate its heritage and founding by the Religious Sisters of Mercy. The screening is free and open to the public. It will be presented in Lemmond Theater in Walsh Hall (301 Lake St., Dallas) from 4:30 p.m.-6 p.m. and 7 p.m.-8:30 p.m.

During the summer, Misericordia University professors Amanda M. Caleb, Ph.D., assistant professor of English; Thomas Hajkowski, Ph.D., associate professor of history and government, and Marguerite Roy, J.D., visiting professor of history and government, traveled to Boca Raton, Florida to interview Ferencz for the production that was produced by Sharyn Bey Video Productions with support from the Soyka Fund for the Humanities at Misericordia University.

“Much of the interview is about Ben’s experience with the Nuremberg trials, including his war experience and his efforts to aid with victim compensation,” said Caleb. “However, it also deals with the International Criminal Court and more complicated questions about what constitutes a war crime and what is justice.”

The documentary also will be utilized as a tool for professors in various academic disciplines, including the three that participated in its production. For example, the Department of English has a course on the Holocaust and literature; the Department of History features classes on the Holocaust, Nazi Germany, and human rights, while the Government, Law, and National Security Program addresses war crimes, international law, and more.

“The interview with Mr. Ferencz gives us insight into the Nuremberg trials that students are not able to read in books and is sure to inspire them to want to do their part in promoting world peace,’’ said Roy. “He even mentions a story that has never been told publicly, so our students are privileged to be a part of history.

“The words of the last living Nuremberg prosecutor are meant for all students, no matter what they choose to do with their life. They will leave the showing truly inspired by his personal message, meant for them.”

Among the messages to be received from the film, according to Hajkowski, is ingenuity and justice. In the film, Ferencz recalls how – since he had only attained the rank of sergeant – he had to fabricate a story about a special letter from General George S. Patton that enabled him to gain access to files that would be used years later in the trials.

“Once a concentration camp was liberated, he would use this letter to gain immediate access to the camp’s files – evidence to be used in the post-war trials,” Hajkowski said. “As he told these stories, he struck me as a person who recognized the gravity of the situation he was in and was willing to do whatever it took to find some modicum of justice for the victims.”

The letter – now de-classified – is included in the United States Holocaust Memorial Museum in Washington, D.C.

Almost 70 years since the trials began, Ferencz continues to write and deliver occasional speeches on international law and peace, especially the ICC in The Hague in the Netherlands. The Misericordia University project, in part, is a living history project that will benefit future generations by educating them about this infamous era of world history.

“His recollection is incredible,” said Caleb. “He is a passionate man who sees himself as still fighting the good fight. This video is meant to help students and future generations understand the history and inspire them to fight for human rights and justice.”

Ferencz was born in the Carpathian Mountains of Transylvania in 1920. His family moved to the United States when he was 10 months old. He joined the U.S. Army shortly after graduating from Harvard Law School in 1943 and fought in every campaign in Europe under General Patton. Ferencz was transferred to a newly created War Crimes Branch of the army after Nazi atrocities were uncovered. In his position, he gathered evidence of Nazi brutality and apprehended war criminals, according to his biography.

“Indelibly seared into my memory are the scenes I witnessed while liberating these centers of death and destruction,” he said in his biography at benferencz.org. “Camps like Buchenwald, Mauthausen, and Dachau are vividly imprinted in my mind’s eye. Even today, when I close my eyes, I witness a deadly vision I can never forget – the crematoria aglow with the fire of burning flesh, the mounds of emaciated corpses stacked like cordwood waiting to be burned … I had peered into hell.”

Ferencz was the chief prosecutor for the United States Army at the Einsatzgruppen Trial, one of the 12 trials held by the U.S. At the time, the Associated Press called it “the biggest murder trial in history.” At 27, Ferencz was tasked with trying 22 members of the SS mobile death squads who were charged with murdering more than one million people. All of the defendants were found guilty. 13 received death sentences.

Today, the ICC prosecutes individuals for the international crimes of genocide, crimes against humanity, and war crimes. The ICC has taken action for alleged crimes in Uganda, the Democratic Republic of the Congo, the Central African Republic, Mali, Darfur, Sudan, and Libya.

“Nuremberg taught me that creating a world of tolerance and compassion would be a long and arduous task,” Ferencz stated in his biography. “And I also learned that if we did not devote ourselves to developing effective world law, the same cruel mentality that made the Holocaust possible might one day destroy the entire human race.”

For more information about Misericordia University and Mercy Week, call 570-674-6400 or visit the university’s website.