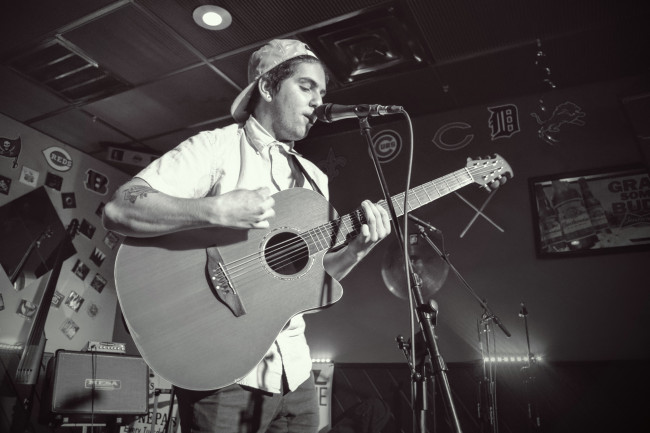 Every week of NEPA Scene’s Got Talent, our free open mic and talent competition at Thirst T’s Bar & Grill in Olyphant, we feature a quick Q&A with the latest audience vote winner, which was Clarks Summit singer/songwriter James Barrett on Sept. 22.

We asked Barrett, an 18-year-old senior at Abington Heights High School, about winning Week 4 with his deeply personal acoustic songs.

JAMES BARRETT: I frequently read NEPA Scene, so I knew of it, and also I knew a few winners from last season. I just liked the idea of an open mic that, for the most part, encourages original music or talent. That sold me.

JB: I started playing bass when I was about 8 or 9 years old and then taught myself guitar about a year after. I didn’t start writing or singing until I was about 12. I played in a band called Bad Answers for a while, along with another project called Shop Local with my friend Terry Hurst. Now I play guitar and sing in a band called Emberá, and I am in the process of recording a solo EP.

NS: How do you approach writing songs for both of your current projects, and how do you separate them?

JB: When I play by myself, I tend to play more of my solo songs mainly because they sound empty without the guitarist in my band. I usually write all the songs by myself, and if I feel like they have a heavier feel to them, I usually show my band and see what they think. Some songs fit better acoustic than others, and that usually is the deciding factor when deciding where they go.

NS: Tell us a bit about the inspiration behind your songs. It seems like you’re telling some personal stories.

JB: I am not a big fan of this tendency, but I tend to write songs only about personal experiences or people I know personally. I try to be more open to other ideas when it comes to writing, but it usually comes back to having some personal meaning behind it. In the end, I write about what is significant in my life because if it wasn’t important in my life, it wouldn’t be a good song to me.

JB: I would love to pursue it as a career. Right now, I am uncertain about college, or what I even would do if I went, which is why I keep coming back to something I know I want, which is to play music and be happy. I am going to try and see what happens.

JB: I felt really incredible. It just felt really amazing to know that people appreciated something I wrote enough to set me apart from the other incredible performers. It was an amazing feeling.

JB: I am not too sure. I think playing all original songs had something to do with it. I felt pretty good that night too, so maybe a mixture of both.

JB: Sadly, I actually spent most of it already. I ate Chipotle, went to a house show, and bought a t-shirt from my friends. They’re in a band called Worries, and they’re real sick.

JB: Sharing a stage with a bunch of great and talented performers and showing people some of my music. The exposure is the best part.

JB: I think all the music and entertainment in this area is unbelievable. Almost everywhere I turn, there is something great that blows me away. We have such talented people, which is real special. I think we just need to make the best out of what we have and stop focusing on what we don’t. That applies to me as well because I tend to get frustrated at stupid things.

JB: Right now, I just have a few shows at some bars coming up.