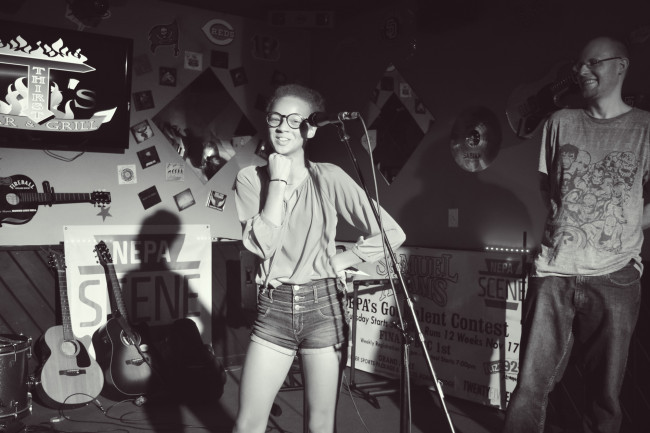 Every week of NEPA Scene’s Got Talent, our free open mic and talent competition at Thirst T’s Bar & Grill in Olyphant, we feature a quick Q&A with the latest audience vote winner, which was young Scranton singer and ukulele player Awnshae Smith on Sept. 15.

We asked Smith, a 15-year-old 10th grade student at Scranton High School, about winning Week 3 with her take on songs like Sam Cooke‘s “That’s It, I Quit, I’m Movin’ On,” also famously covered by Adele.

NEPA SCENE: How did you hear about NEPA Scene’s Got Talent, and what made you decide to come perform last week?

AWNSHAE SMITH: I saw some things about NEPA Scene on Facebook, and one day my mom tagged me in the competition post. It looked like a lot of fun, so I started looking up songs to perform.

AS: I think I started getting into music when I was around 6 or 7 years old. I really enjoyed singing in my elementary school shows, and my ballet theater had just started up Green Ridge Youth Theatre, so I joined up with that. The first musical was “Annie Jr.,” where I played Tessie, and it all just went up from there.

I also competed in many school talent shows and won a few. Now I’m a Scranton Knight Rhythm, which is my high school’s traveling choir. I just hope that I can still fit track, step team, and diving into there.

In regards to my ukulele, I got into string instruments when I was in 4th grade. I played violin from 4th to 6th, and switched between viola and cello throughout middle school. One day, I was browsing Guitar Center and I fell in love with the uke. I got one for Christmas and taught myself how to play.

NS: What are some of your favorite songs to cover?

AS: I absolutely love soulful songs that I can tweak to my own style, but I also really enjoy quirky little tunes for fun.

NS: Who are your biggest musical influences?

AS: I grew up listening to a large variety of music, but my main influences now would be Amy Winehouse, Tina Turner, and Whitney Houston.

NS: Have you created any original songs, or are you working on any currently?

AS: I have a notebook dedicated to songwriting that I have mostly filled up; I’m just really shy when it comes to sharing the songs. I feel like they’re really personal, and I have to get used to the idea of letting other people into my head.

AS: My whole life, I’ve wanted to be a famous singer, but honestly, I think that had something to do with me being young and thinking I was the only singer in the world. As I’m getting older, it’s more about expression and bringing enjoyment to others. I still would love to do something in the music industry, but as a Plan B, being an English minor, a criminologist, or a lawyer would be wicked.

NS: You were featured by Ryan Leckey on WNEP-TV. What was that experience like?

AS: I actually went to “Leckey Live” just to see and support my younger cousin, Tanner, play his drums, but then Ryan asked what I did and I told him that I sang. It was really exciting and surprising to be put out there like that.

AS: I was super-duper surprised that I won last week, since there were so many great acts and they all seemed so much more seasoned. It was a pretty nice feeling to win.

AS: I’m still confused as to why I won, but I like to think that I won because I was different.

AS: I need to buy my own step team uniform (since my school doesn’t fund us), so it’ll go towards that. And maybe some hair products.

AS: I’m looking forward to meeting more new people and seeing what local talent we have around here in NEPA.

AS: I think that the local arts scene is wicked. Most of the people are so nice, and it’s awesome to know there are so many other people like me who just enjoy music and art that I can relate to. I wish that all the talented individuals were better recognized.

AS: I post a couple covers on my Instagrams. My main account is @awnshae, which has a few old covers, and my music account is @shae.music. I also plan to start posting full covers on YouTube and SoundCloud, so stayed tuned for those details!