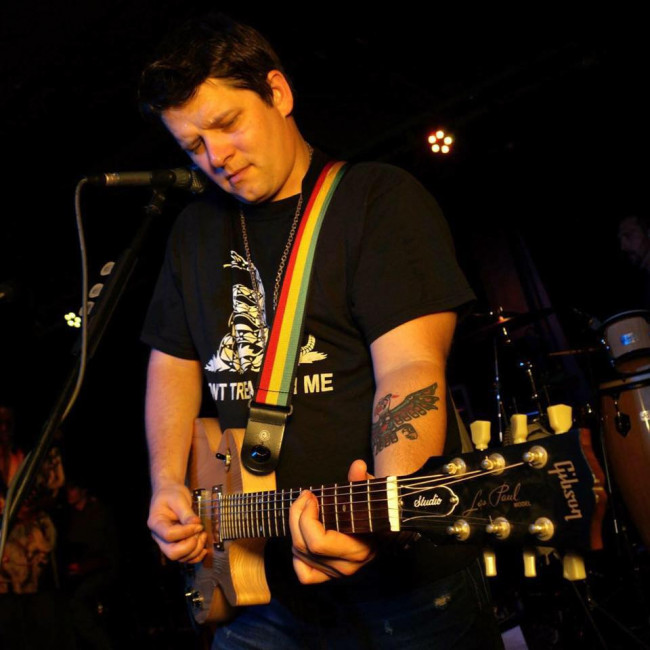 When you think of reggae music, you probably call up good vibrations, warm feelings, and perhaps a cold beverage in your hand as you relax on some tropical beach. Isn’t this where we’d all like to be, especially now as the summer comes to an end once again? While a trip to the islands may not be in your immediate future, a local musician is driven to help bring the beach vibe to NEPA, one concert at a time.

NEPA Scene recently spoke with resident reggae musician Pete Terpak, member of the Subnotics and the newly created Rootz Attack, about an upcoming show he is putting together at the River Street Jazz Cafe in Plains on Friday, Sept. 18 that captures this spirit.

NEPA SCENE: Can you tell us a bit about your upcoming event?

PETE TERPAK: Love to! We will be part of what I think is going to be an epic night of reggae in NEPA! We have Kevin Kinsella of 10 Ft. Ganja Plant and co-founder and former frontman of John Brown’s Body coming to town to perform some of his material from his new album, as well as some of the favorites from his other projects. Kevin is fresh off tour this summer with Matisyahu and will be joined by his backing band, the Analogue Sons. In addition, my new group Rootz Attack will be making our debut by kicking off the night.

NS: What made you decide to book Kevin Kinsella?

PT: Kevin is one of the earliest pioneers in the American reggae movement. While on vacation last year, I caught one of his shows, by chance, in Boston at The Sinclair. These guys blew the roof off the place! Being from NEPA, we don’t always get exposed to some of the really cool things going on in the rest of the country. It’s a big part the philosophy that I positioned to some of my bandmates when putting the Subnotics together.

Anyway, I really wanted to help bring something cool to the area and want to continually help build the scene in NEPA. We have had some good results at the River Street Jazz Café, and I talked to the owner, Rob Friedman, about trying something new. He was willing to take a chance on it. I give him a lot of credit and hope people realize that the owners of the local clubs really put their neck out to help keep the scene going. It’s important to show them support for their efforts also.

NS: Can you tell us about his music?

PT: Sure. I hope I can do it justice, but really it’s something you just have to experience. The answer might not be so easy, though, since there are many subgenres of reggae and Kevin plays them all to the nth degree. Personally, my favorite tracks of his are the deep roots cuts. No current artist does it better, and his vocal range goes from the bottom to the top. He does some tunes in falsetto that would rival Junior Murvin, but then lay down a gritty dirty reggae vibe on the next track – all super melodic stuff that you will be bumping your head to and humming for the rest of the weekend.

NS: Now tell us about your music!

PT: Yeah, man! Well, it’s kind of funny when people find out about my music side, especially when I tell them that I’m a reggae musician. Usually people are like, “Damn, really? You look like a cop!” But I have been playing mostly in reggae cover bands now for the better part of a decade. I’ve always been content playing the songs I love by other artists, but about two years ago, I started to develop an interest in writing. At the time, I would frequently play with George Wesley (another local reggae artist and mentor of mine), and it really motivated me seeing people responding to his music and words. It was like having the next step laid out in front of you. Since then, I have been writing, arranging and, most of all, learning the process.

NS: How long have you been playing?

PT: I first started playing guitar around the age of 18, which would be considered late in life by today’s standard for most people. I didn’t consider myself serious about it for the first couple years, but I did play every day. Everything started to develop for me when I first got exposed to live reggae music while living in Ocean City, Maryland in between college semesters. Once I was exposed, it was such a profound effect on me; it really just changed my whole persona. From that point forward, I knew I wanted to make people feel that same feeling that I had and help them escape reality, even if it’s for just a few short hours. To me, making people feel good is the noblest cause in the world.

NS: What can you tell us about your bands?

PT: I have a couple projects rolling right now. The Subnotics, an eight-piece unit, plays a lot of standard reggae tunes, such as Bob Marley and Toots and the Maytals – the kind of stuff you catch when you’re on vacation somewhere tropical. We started to work some originals into that project as well, which is fronted by my good friend – and powerful vocalist – Robb Brown.

Roots Attack is our new venture, leaning on some more obscure reggae covers and original work. You can also catch me from time to time jammin’ with George Wesley and the Itations.

NS: Are you working on any original music, and if so, can we expect to hear it on Friday, Sept. 18?

PT: Yes, sir! About half of our set list right now is original, so come out and let us know what you think! We have been working hard on honing in on which tunes we will be recording, and this show will definitely help in the process.

NS: Is there a positive response to reggae music in NEPA?

PT: Most definitely. We were blown away by the amount of people at some of those first shows. We were the first band in a long time to sell out the River Street Jazz Cafe. We were shocked. I’m going to let you in on a little secret, though – most people like reggae and they don’t even know it! It was apparent from the jump that there is a demand for it. We see more and more new faces every time.

NS: What is your goal with this event?

PT: We hope to spread some positive vibrations through NEPA for the night. I think reggae is unique in that way. Sometimes you want to see a kickass rock show and let that energy get you amped up. We want you to walk out of our show feeling like you just had a spiritual experience.

NS: Do you have any future events planned or future goals with bringing reggae bands to Wilkes-Barre?

PT: We do! The Subnotics frequent the River Street Jazz Cafe, and if you’re a fan of reggae, be on the lookout for Rootz Attack, as well as the George Wesley Band. This event is special, though, in that we’re honored to be sharing the stage with – what I consider to be – one of the greatest current reggae acts. We want to see all the people out there that have thought, “There’s nothing cool to do in NEPA.” This is your chance to help change that mindset!

The show is 21+. For more information, see the Facebook event page.