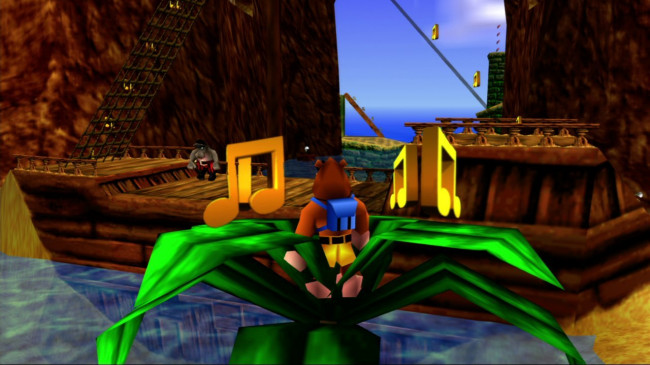 There are many reasons that the history of video games and those shared memories we have with them are so fascinating to me as both a small business owner and retro gamer. The chief reason among these would have to be that the video game industry, like all forms of entertainment, is riddled with ideas and creations that sometimes seem like a surefire hit, only to fail miserably, while the most absurd demonstrations of this artistry can go on to become some of the most successful video game franchises the world has ever known.

Today, we’re going to talk about the latter, a game that, while developed by a company that could do no wrong by the time this title debuted, was initially met with some confused looks and many chin scratches, only to go on to become one of the biggest cult classics the company ever made. “Banjo-Kazooie,” by the folks at Rare, is on tap today for Turn to Channel 3, so let’s fire up the Nintendo 64 and get to work!

“Banjo-Kazooie” may very well have the most infectious list of tunes on its soundtrack, creating an environment that, just on music and sound effects alone, makes you want to dive right in. While some serious gamers may find this soundtrack a bit too kiddy and Saturday morning cartoony for their liking, it’s important to remember that “Banjo-Kazooie” was created for a company and its hardware that first called its debut into the gaming scene a “toy” in order to create more of a buzz (and thus sales) among its target demographic – children.

In the end, I think one of the many reasons this title appealed to the general consensus at the time was due to the fact we all wish we could be kids again, don’t we? While Rare has always had its fair share of great soundtracks in their games, few are as well-rounded as this one.

It’s pretty obvious that “Banjo-Kazooie” borrowed quite heavily from “Super Mario 64, while tweaking things just enough to make a distinctly unique game all its own. Puzzle pieces and musical notes replace things like coins and stars, and the environments are well-designed and full of many interesting pieces for your player to interact with, but it is definitely worth noting that while “Super Mario 64” was the guinea pig as far as Nintendo’s foray into 3D graphics, creating some crude and chunky polygonal sprites, “Banjo-Kazooie’s” world is both vast and smoothly designed in a way to make any famous Italian plumber jealous.

While “Banjo-Kazooie” is a game sometimes criticized from borrowing too heavily from “Super Mario 64,” it’s a sad injustice in that the folks at Rare simply expanded on the basic premises that 3D platformers like “Mario 64” set out and, unless you’re someone willing to give this game a fair chance, you won’t get to experience that. The characters you interact with, the need for certain combo techniques and objectives to unlock other areas and gain better access, is crucial in setting this game apart from the rest. The variety of moves available, the fact that objectives fit so well together, and that wit and charm so often present in Rare games all make this a far better 3D platformer than people give it credit for.

To dismiss “Banjo-Kazooie” as an overly cute “Super Mario 64” clone is quite the crime, especially during a time in the industry when developers were trying to harness the power of 3D graphics in the most effective ways possible. Critics may have said it was too cute for its own good, but in retrospect, it was really the best expansion on a basic game-developing premise there was at the time. Don’t look at “Banjo-Kazooie” as the sincerest form of “Mario 64” flattery – look at it as its own entity, taking notes from Nintendo on platformers, but creating something uniquely its own.

Sure, the industry obviously owes a lot to Mario and Nintendo for creating a franchise that brought video games out of the “dark ages,” but to say that is also to say that “Banjo-Kazooie” is owed a debt of gratitude by arguably creating the best 3D platformer on the N64.

Speaking of Nintendo’s beloved mascot, we will be finishing up “A 64 September” with a look at “Super Mario 64” next week.

Can you believe it’s nearly October? Get those jackets, pumpkins, and apple cider ready and game on!