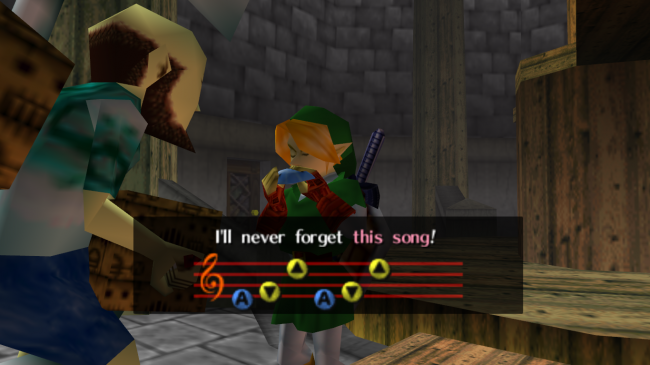 September has arrived, gamers, and here on Turn to Channel 3, that means we are going to celebrate a gaming console that is one of the most beloved in the history of Nintendo – one that not only has countless customers of mine knocking on my door for any new arrivals, but also the last Nintendo console to retain the use of a cartridge form. Of course I’m talking about the Nintendo 64, a console that I didn’t own when it first came out, abandoning what I thought was a weird-looking controller for the sleek and sexy (for the time, anyway) Sony PlayStation.

Many years later, I would begin collecting for the Nintendo 64, and this month, dubbed “A 64 September,” we are going to take a look at five classic games on the console that any diehard Nintendo 64 fan knows and loves. What makes these games so special? Are they ageless, or are even some of the most sought-after games in the vast Nintendo library not immune to the advancement of technology?

Today, we begin with a game very much like Apollo Creed in the “Rocky” films, a game that needs no introduction anywhere in the civilized world. When one thinks of the N64, the title “Legend of Zelda: Ocarina of Time” always seems to be one of the first games to come up in discussion, and for good reason – like “Super Mario 64,” fans had doubts whether or not a franchise as full of grandeur as “The Legend of Zelda” could be created in a way to make it stand out on the Nintendo 64.

Keep in mind, not every franchise with previous 16-bit and 8-bit outings had a great showing on this new console of the time, so there were definitely some legitimate concerns, but if there’s one thing that we can all agree on, it would be that Nintendo found a way to not only pull it off, but create a game that is one of the more polarizing entries in the franchise’s history, with fans either loving it, defending it to the end, or dismissing it as 3D polygonal rubbish. What side are you on? In any event, let’s journey to Hyrule as we begin “A 64 September” with “The Legend of Zelda: Ocarina of Time!”

“The Legend of Zelda: Ocarina of Time” (Nintendo 64)

While debates between “Legend of Zelda” fanboys continue to rage on about the overall quality of the game and whether or not it is worthy of the lofty status it holds in the retro gaming Internet community, what isn’t up for debate is one of the most beautifully crafted soundtracks in the history of the “Zelda” franchise.

Keep in mind, most gamers, whether diehard fans of Link’s adventures or not, were more than merely impressed by the soundtrack for “A Link to the Past” on the SNES, so the fact that Nintendo took things that much farther with the introduction of the ocarina (which has seen a spike in sales and popularity since this game’s debut) to create some truly magical and breathtaking tunes just shows you how far they were willing to go to get this game over the hill and into the hearts of gamers. If you have any further questions on the validity of my statement, chew on this – whenever I have this game loaded onto an N64 in my shop, the music cranked up, the title music alone is like a siren song for customers who cannot believe that, within the ancient halls of the former Sugarman’s department store, a soothing ocarina tune can still lull them back to their fond childhood memories.

While I can relate to the critics of this game who say that perhaps the 2D style was more crisp and easier on the eyes than Link’s first 3D outing, you cannot ignore the sheer artistry displayed in “Ocarina of Time.” This was the first of its kind, and the graphics team did all they could to expand on a world that, for many years, was seemingly barricaded away and kept from us. Sure, like a lot of games with a similar style back then, in 2015 it appears chunky, boxy, and typically polygon happy, but I still applaud the effort shone here because, until this mysterious open-world “Zelda” game arrived, this was the initial and most beloved first step in that direction, and the fact this was done prior to the hysteria that would be Y2K is nothing short of astounding.

The temples are vast, the enemies are detailed, and the world as a whole is diverse and full of whimsical charm. Miyamoto created “The Legend of Zelda” to share his childhood love of exploration with the world, and to bring that to a larger scale on the N64, a world gamers wanted to explore and journey within had to be created, and in that sense, I think we can all say that “Ocarina of Time” was a rousing success.

I am steadfast in saying that no game in the history of classic games is perfect, and I hate to rock the boat here, but “Ocarina of Time” is no exception to this rule. Yes, this is a true masterpiece that broke so much ground in the video game industry at the time while generating all-night sessions with college students across the country, but I can still fondly recall my roommate in college, who was nothing short of religiously addicted to this game, cursing up a storm while having to go back to certain areas of the game in order to complete tedious side quests, sometimes for rewards that didn’t seem worth the time or effort put in.

While “Ocarina of Time” introduced us to Link’s horse Epona, who is now one of the most beloved pieces of “Legend of Zelda” lore, it also introduced us to camera angles we needed to get used to, the omission of a manual jump button and, for my money, the other end of the “Legend of Zelda” non-playable character spectrum, Navi. Navi is the most annoying fairy on the planet who, by the 56th “Hey, listen!” or so, will make you want to reach through your television and strangle her tiny soul. All of that said, there are few games as immersive and yet personally rewarding as “Ocarina of Time,” which is a fact that’s hard to ignore.

A cornerstone of any true N64 collector’s stash, “Ocarina of Time” is beyond recommended; it is almost demanded by fans of the N64 as part of a balanced late ‘90s gaming breakfast. Sure, most gamers can blow through this title in about 30 hours, but it is those who love a good quest and seek to fully complete the game that are in for the long haul, relying on nothing but their reflexes, Link’s sword, and as many two liter bottles of Mountain Dew they can pour down their throats to stay awake at 3 a.m. A technical marvel for its time, “Ocarina of Time” is one of the more polarizing entries in the “Legend of Zelda” canon in that it is either worshipped or scorned for what some fans of the franchise feel is unwarranted praise in comparison to other titles in the series, namely “Majora’s Mask.” In the end, it really doesn’t matter which side of the fence you’re on because, globally, right now in 2015, “Ocarina” is still a timeless example of sound game developing that we are all basking in the glow of – and will for years to come.

I thoroughly enjoyed this review, and I sincerely hope you did as well. Next time on Turn to Channel 3, we look at an N64 classic that not only personifies the term “cult classic,” but also redefined and changed the way we looked at movie licensed titles forever.

Until then, get ready for some apple cider and pumpkins because fall is on its way, and hey, that’s no excuse to stop gaming, so game on!