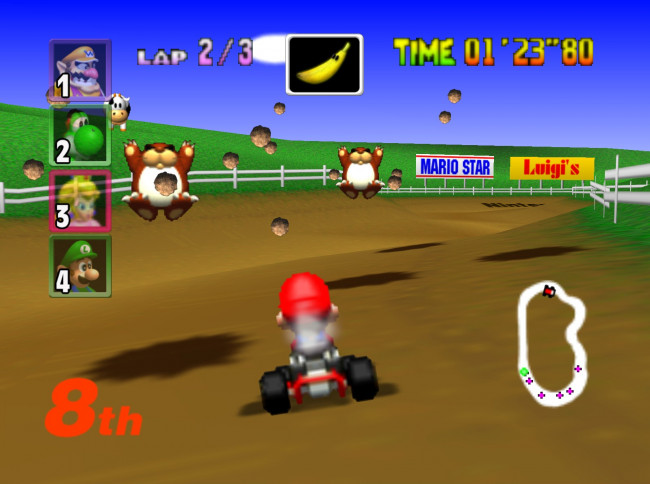 One of the many things that unite retro gamers are those fond memories they share with friends, usually involving a beverage (alcoholic or otherwise), some snacks, and some great memories, albeit some that involve some intense moments. We all have that one friend who is so good at video games that, for that good hour, hardly anyone speaks to them because, to the novice or even intermediate level gamer, this person is a colossal jerk (or feel free to add your own more colorful description) and all everyone else wants to do is knock this person down from their pedestal.

Well, today on Turn to Channel 3, we honor a game that’s all about that on the N64 and then some, “Mario Kart 64!” What’s that, friends? Are you getting sweaty palms already? Perhaps feeling a bit tense when reliving those moments? Well, let’s put that aside as we get into our karts and race with Mario and friends!

Like a lot of Nintendo franchises at the time, there was some skepticism and concern about how “Mario Kart” would look and sound when making the move to the Nintendo 64, but in the same way, all these fears were quickly alleviated with one of the most stellar soundtracks on any N64 title during the console’s lifespan.

Mario greets us in the intro, in what would then become a staple of the Mario Kart titles for years to come, and the soundtrack has some great hits with music that just gets you excited about racing these courses. Certainly there are tunes riddled with cliché sounds – Moo Moo Farms and Koopa Troopa Beach are prime examples – but if you’re driving through a farmland or a beach, don’t you want songs that tie-in with your track? Despite this, it doesn’t take anything away from the tunes that play on Toad’s Turnpike, Frappe Snowland and, of course, Rainbow Road, which is usually among the favorite tunes gamers hear on any incarnation of the track on any entry in the “Mario Kart” series. A very well rounded soundtrack overall, there’s something here for any gamer to enjoy as they race with friends.

Let’s not forget the little things either, like the voices of the characters as they get blasts of speed or even announcing their victories at the end of races when they come in first place. This was the first step in creating a more complete experience in the “Mario Kart” franchise, and it was cool to see where all these staples we often take for granted in the franchise got their start.

For many, the pixelated graphics, especially in close quarters, can be a bit too blurry or clunky for some, but I felt they took what was present in the original “Mario Kart” for the SNES and really upped the ante with some imaginative level design, despite some looking a little bland, and creating great examples of our racers, some completely new to the series. What’s apparent in “Mario Kart 64” is, like a great racer, this one knows when to pace itself, when to give us what we came for, and then dazzle us with bright colors and the proper use of the palette they are given. “Mario Kart 64” is a very simple game in premise, so there’s really no need to go over the top with graphic work, but you can’t argue the fact that, for the time, courses like Rainbow Road were the most colorful representations of what the N64 hardware could produce in the right hands.

Like many of the popular N64 titles of the time, “Mario Kart 64” created the rumblings of what would become a multiplayer boom in gaming, and it’s bittersweet in that this was way beyond the days when online multiplayer would take over, running over the basic human need for social interaction. “Mario Kart 64” encouraged hanging out with friends, making new ones, and enjoying the fun (and possible rage) of racing against friends. Sure, friendships were indeed tested with the debut of the spiny shell, but isn’t it more fun to be playing with (and screaming at) friends in the same room instead of getting schooled by a 12-year-old kid in another country?

“Mario Kart 64” started many staples in the franchise’s robust history, building the first steps to a racing juggernaut that doesn’t have any of the gritty seriousness of many racing titles. Very few things in gaming are certain, but putting characters from Nintendo’s universe together, namely those which center around its mascot, always brings success and creates a fun time even for those who usually detest racing games. It’s simple, straightforward, and fun, three key items needed in any successful game, whether during the days of the N64 or the PS4, Xbox One, and Wii U.

“Mario Kart 64” is one of those titles that always seems to be going up in price, and for good reason. Retro gamers and collectors are smart people, knowing that the Nintendo 64 has a tier of great games before it drops off into the mediocre, with very few of these top games to choose from and less and less becoming available to own. I always tell my customers that it’s pretty much a sure thing that games like “Mario Kart 64,” along with the original “Super Smash Bros.” and the “Mario Party” titles, will always hover around or sit comfortably at about the $40 range.

This may come as a shock to some, but keep in mind, gamers who grew up with a Nintendo 64 are now getting to the point in their lives where they want to collect, they want those feelings of nostalgia back, and coupling that with the fact this was the last Nintendo console to use cartridges and you have a truly hot commodity on your hands in the retro video game market. Bottom line, if you grew up with a Nintendo 64, are a loyal Nintendo consumer, or even trying to educate someone younger on where some of their favorite franchises began, then you need “Mario Kart 64.”

Join me next time as we continue on with “A 64 September,” taking a look at another gift from the folks at Rare, a game that proves that even a goofy bear with a birdbrain for a friend can create video game history.

Until then, enjoy this cool, comfortable weather while drinking plenty of pumpkin spice stuff (if you’re into that sort of thing) and, as always, game on!