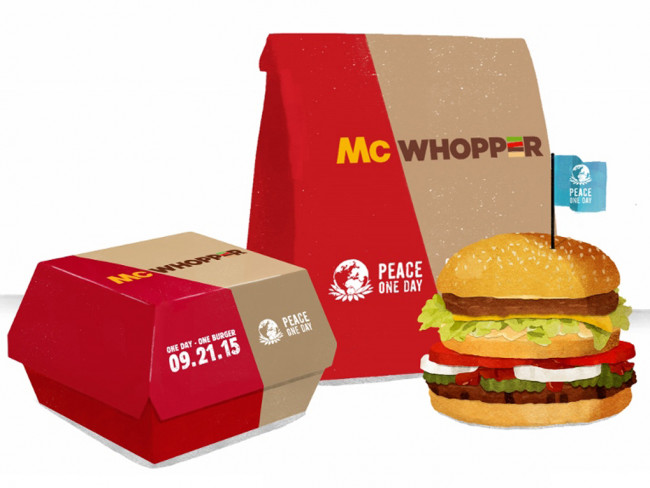 There are a lot of random holidays appearing on calendars these days. Hell, I don’t even know if you can call them “holidays.” What I do know is that some of these “holidays” are nothing but gimmicks for random days that hold no actual historic or national meaning to them whatsoever. Then again – I have to be honest here – I do hold a soft spot in my heart for Sept. 19, “Talk Like a Pirate Day.”

One of these new days that has been brought to my attention recently doesn’t actually sound gimmicky at all! Look, fair warning, here – this may not be new at all, as I’m fairly ignorant to these kinds of special days. Anyway, Sept. 21 has been deemed the “International Day of Peace!” Now this is the kind of day I can get behind! The symbolism, the meaning, is something that should be practiced by everyone the world over! I’m just lucky Burger King brought it into my – and the public’s – view.

So, a day that promotes the end, or at least the halt, of violence, war, and all that vile, ugly shit for a single day has not been mentioned once by any world leaders, yet I hear about it via a special sandwich proposal by Burger King to competitor McDonald’s. Said burger would be a combination of Mickey D’s’ Big Mac and BK’s Whopper, titled “the McWhopper.” It basically would be a Big Mac on top with a Whopper patty and fixings on the bottom separated by the middle bun. However, that’s not what’s actually important. What is important is that it took fast food to bring awareness to the day.

That being said, they say the road to hell is paved with good intentions, and this proposal certainly went to hell right quick when McDonald’s declined the offer entirely. I mean, if two fast food companies can’t come together, what does that say about the rest of the world?! However, if one gives pause and actually looks at the proposal, Burger King may have had ulterior motives behind the proposition.

What initially appeared to be a white flag of truce coming from the Kingdom of Burger and its seemingly perpetually jovial monarch towards Ronald McDonald and the puppet government he established under Mayor McCheese is nothing but the latest salvo in the never-ending fast food wars. The ammo used – the proposed burger itself!

The Burger King is a wise ruler, but he is an even greater general on the field of battle. His exploits in war are noted, as one cannot acquire and keep a kingdom for as long as he has without great skill. The union of the Big Mac and Whopper, as proposed, would have given him an edge of advertisement in his enemy’s own house. The sandwich’s title itself, the McWhopper, gives his contribution top billing, after all. He also knew that when, not if, Ronald declined the armistice, it would come with a modicum of negativity, some bad press, and could even be considered to be sour grapes in the eyes of the public.

On another level, thanks to Burger King’s propaganda machine, we see the rekindling of the “patty size war” that comes about every few generations. The visual representation of that burger, created by the King’s graphic design department, shows a considerable size discrepancy between both houses’ contributions – the good King’s portion being much grander than that of the “humble” clown’s. Looking at that, it’s entirely understandable why Ronald did not accept the compromise, even if for a day. While he may not possess any titles, Ronald is no novice in these matters. His hands have been stained by his fallen adversaries and McRib sauce alike over the years. He would never give any enemy an advantage in their perpetual war – not in the slightest.

Ummm… so where the hell was I in that giant allegory, again? Oh yes, the International Day of Peace and why it’s only being talked about by the fast food market. Bottom line – I’ve got no fucking clue! Evidently, no one of power gives a shit about peace, even symbolically, for a day in general. It is just another gimmick day, after all. It’s just one more dumb day where people will post, share, and tweet stupid images with “inspiring” captions all over social media and the “Twitterverse.” They’ll do this so they can feel good about themselves and be filled with a false sense of “social awareness.”

You want to know what makes me feel good, though? It’s pretty simple, really – downing a great fucking burger! And while McDonald’s may have squashed my chance – and fast food lovers’ chances – for what could’ve been a great burger, I remain undaunted! Where there’s a will, there’s a goddamn way!

May I rest in Peace.