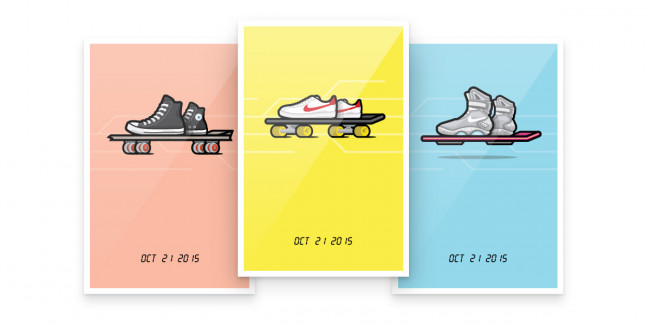 The “Back to the Future” trilogy is iconic in so many ways, but for artist and web designer Kyle Ruane, it’s all about the shoes.

To promote “Great Scott!” – a “BTTF”-themed art show at his business, Coalwork, in Scranton – the co-owner came up with a series of bright but simple illustrations that show off Marty McFly’s footwear, along with his getaway wheels.

“We wanted a simple illustration that we could slap on a poster or in a Facebook posts that would grab people’s attention. The skateboard scenes are extremely memorable for me, so I just assumed they would strike a chord with others as well. I wanted the style to be fun since our goal with the event is to be really relaxed, so I tailored the illustration to fit that mold,” Ruane told NEPA Scene.

“I actually looked at a bunch of posters around town and basically did the opposite to make ours stand out. I used a single, bright background, which is in stark contrast to the endless sea of posters for corn mazes and haunted hayrides that are currently plastered everywhere, and kept things super simple, which I think has helped a ton.”

The show in the downtown Scranton coworking space features the heavy artwork of several other local artists and opens, appropriately, tonight – Oct. 21, 2015, the date which Marty and Doc Brown travel to in “Part II.”

Lightning like this only strikes once, so we took the opportunity to talk to Ruane not just about the beloved films and the art they’ve inspired, but what the future holds for technology, the city, and those living and working in it. 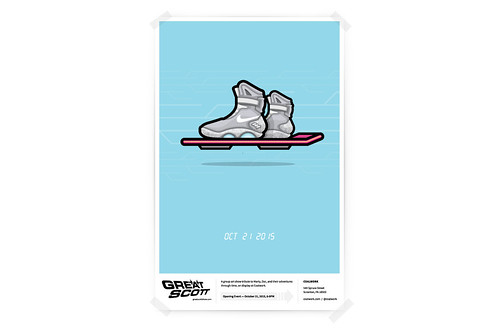 NEPA SCENE: Why did you guys decide to do this art show?

KYLE RUANE: “Back to the Future” happens to be a favorite amongst Coalwork members, and we felt obligated to celebrate the date in some meaningful way. An art show seemed like a perfect fit – we want to show the creative atmosphere here at our coworking space as well as promote the local community, getting others to participate. We’ve had art shows here in the past during First Fridays and thought that experience meant we might be able to pull something like this off.

NS: How did you choose the artists who would participate?

KR: We really didn’t choose anyone. We literally asked everyone we knew to participate and invited them to do the same. It was pretty important to us to not limit the artists represented to any specific medium or level of experience. We want people who are excited to be here have their art on the walls, not necessarily the most accomplished artists.

Pieces are still rolling in, but at this point we have everything from watercolor to computer graphics to needlepoint.

NS: What do the BTTF movies mean to you personally?

KR: I think that the movies represent the aspects of the past we enjoy remembering. They are unapologetically ‘80s but also hold up extremely well, whereas a lot of other, similar movies did not. Sure, “Indiana Jones” and movies set in other decades are as good today as they were when released, but Indy didn’t listen to a Walkman or rip through town on a skateboard before performing a slightly metal cover of “The Power of Love” by Huey Lewis and the News. It was a perfect confluence of pop culture, science fiction, and comedy that was very approachable for anyone and is almost universally well-liked.

Philosophical questions aside, I remember watching the movies and imagining what the future would be like outside of Hill Valley. What would my school be like? Would bikes fly? How would video games work if you didn’t use your hands?

NS: What is your favorite movie of the trilogy?

KR: I think the original is the best movie, but “Part II” is easily my favorite. The glimpse it gave into a possible future that I would live to see was just glorious. Obviously, the hoverboards were amazing, but it showed us what Pepsi and Pizza Hut might look like. We now blast movies for obvious product placement, but it completely worked in “BTTF.”

NS: How do you think these movies did in terms of predicting the future?

KR: On the surface, not too well. We don’t have hoverboards. Cars can’t fly. We haven’t abolished lawyers. But, they got some basic concepts right, like video conferencing, wearable tech, and the Cubs are oh-so-close.

NS: Are you disappointed that we don’t have some of the technological advances featured in the movies, like hoverboards?

KR: Not really. I think it’s better to have a few of those things remain just out of reach, keeping everyone’s imagination alive. 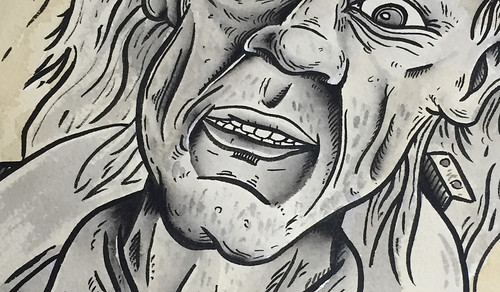 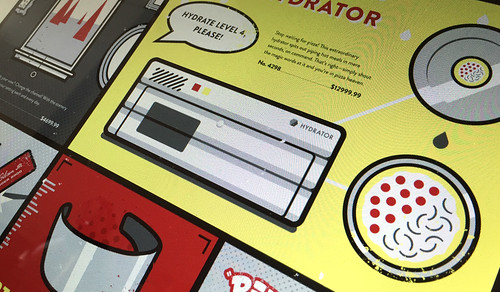 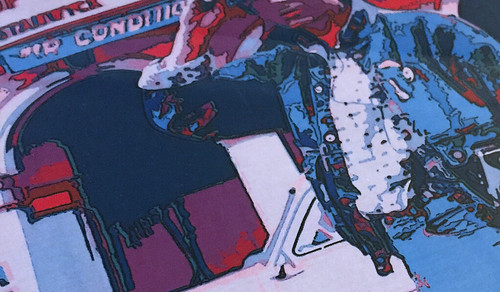 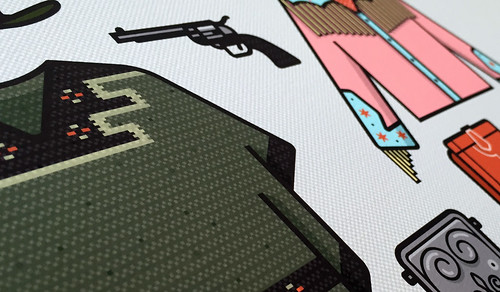 NS: Coalwork is, in many ways, a technology-based business. What do you see in your own business’ future?

KR: I think all companies will evolve into tech companies. It’s already tough to find one that isn’t active on some piece of the Internet, be it communication though social media, taking payments online, or simply using cloud-based tools, but soon that will all be a given. We see Coalwork, and coworking in general, following a similar trend. Much like it’s now common to pay $10-$15 dollars a month for a subscription to accounting software online instead of a $300-$400 investment for a box containing a CD with a dated program you need to install on your computer, it will be common to pay a fee to have a spot to work month-to-month rather than go through the undertaking of leasing an entire space or even building.

Our goal with Coalwork specifically is to have the community shape the space, culture, and future of itself. Our members and their goals and interests should absolutely influence where the community as a whole is headed. The entire concept of coworking is still new to Scranton, but the interest so far has been encouraging, and it’s only getting better.

NS: Scranton and Northeastern Pennsylvania in general is often criticized for being behind the times. Do you find that to be true?

KR: Generally, yes, but I do see a lot of improvement. Obviously, technology has allowed us to be much more connected and aware of the world outside of NEPA than perhaps in past generations. I think that makes it exponentially easier for us to push things forward. The fact that a majority of people are walking around with the Internet in their pocket has really become the great equalizer.

As a web designer, I would have had to move to a large city to advance my career as recently as 10 years ago. Now, I can do business with clients in New York, San Francisco, and London and live here. When people start staying, or even moving here, that’s when you see new restaurants, art galleries, shops, etcetera start popping up. What I think will be interesting is, “How do we preserve the local history and culture when we are no longer behind the times?” That will be very important.

NS: What can this area do to be more technologically progressive?

KR: I think it’s as simple as having more people be interested in staying here instead of moving to New York, etcetera, and be willing to be part of the local community. It’s no secret that there’s a lot of empty spaces around Scranton, Wilkes-Barre, and everywhere in between. That creates such an incredible opportunity for potential business owners. Locations are readily available and as cheap as you can imagine. If all businesses are tech businesses (as I believe they will be), than more competition should naturally progress things.

Also, I think seeing more people sharing and publishing online is very encouraging. As more people post content, podcasts, artwork online on outlets other than just Facebook, I think the technical acumen of everyone will continue to rise.

NS: What are the things you think will affect this area’s future?

KR: Man, nearly everything. But, I think that any growth within the tech community would be huge. Tech companies typically require minimal space and could create plenty of well-paying jobs. This may even be as simple as having a few local startups have some moderate success.

Any movement away from being so driver-focused could have a big impact as well. Traffic just seems to be such a bigger issue than I remember it being five or six years ago. What if it was super easy to hop from Scranton to Wilkes-Barre without driving? I definitely have no answers on this one – maybe buses could do the trick, or maybe Uber will catch on here. Or maybe we need electric trolleys again.

Maybe most importantly, I think simply remaining proud of the area and committed to improving it however we can helps immensely.

KR: We’d love to do more events like this one in the future, so please reach out if you’re interested in teaming up. And, if this sounds like something you’re into, maybe you’d enjoy working next to us at Coalwork. Come check it out.

The show will be on display through the end of November during regular business hours. For more information, visit greatscottshow.com or the Facebook event page.