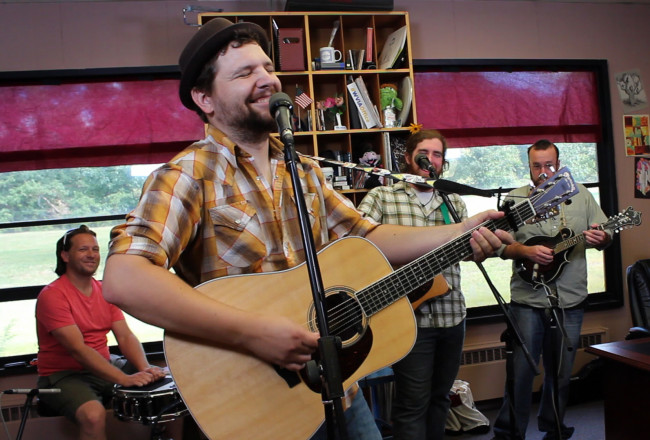 Drawing inspiration from Henry Wadsworth Longfellow poems and his hometown city of Wilkes-Barre, indie folk singer/songwriter Tony Halchak weaves through tunes as beautiful as they are heartbreaking in the final Office performance of 2015.

NEPA SCENE: Where are you originally from?

TONY HALCHAK: I grew up in Wilkes-Barre and Mountain Top. My fathers’ parents were Lithuanians and Ukrainians from the Heights section of Wilkes-Barre, where I was born. That area and heritage shows up a lot in my songs.

NS: When did you start getting into music?

TH: I’ve always been a fan of music. My dad always had oldies playing somewhere when I was young, and my mother listened to classic country. I found an old guitar under my parents’ bed when I was about 15 and taught myself how to play it and have been playing and writing since.

NS: Did you play in bands back then?

TH: Yeah, I’ve been in the local music scene for a while, probably about 12 years or so. I’ve played in the bands Barefoot, Rippletree Effect, Evernight, Farmer’s Daughter, and sometimes Jung Bergo.

NS: You mentioned that your heritage shows up in your songs. Who or what inspires you and your songwriting now? Artists? Musicians? Places?

TH: It’s hard to pinpoint one thing I draw inspiration from because I feel like I’m a writer first and foremost. My mother is a beautiful poetry writer, and I think that’s what set me on my course. Usually, for each record I do, I write a lot of songs. For my first record, “Collecting,” I probably wrote upward of 150. For “Even Giants Despair,” maybe about 30 or 40.

I carry the writings around with me in my pack, and I’m always toying around with more ideas, adding and subtracting from things I’ve already written. It can be maddening, and usually when I’m done with a record, I step back from it for a few months and decompress and try not to analyze everything in my life in terms of writing and storytelling. All that being said, there are certain themes that seem to always sift to the top, among them my blue-collar family, my personal relationships, and a lot of literary references.

Songwriting is very important to me. It’s one of the reasons I created the Brew Sessions series each year. I may not be the best guitar player or showman in the area, but I feel like I can stand toe to toe with any songwriter in the Valley.

NS: In the performance, you played four songs: “Susquehanna Girls,” “Five Alarm Fire,” “Electric Lovers,” and “Ragweed Summer.” Can you tell us about each of the song’s inspirations and how they came together?

TH: “Susquehanna Girls” is pretty autobiographical. It’s my life from about 17-28 years of age. It uses a lot of analogies from our area to describe my shortcomings. You know the Susquehanna seems like a beautiful river sometimes, but you always know that she is ready to rise up and destroy at any moment. It has also one of my favorite lines from the whole record:

“Who’s gonna save ya?
Girls from Pennsylvania?
Good luck living in that so called “Valley with a heart”
Where even giants despair
And every year
Go and get themselves all ripped apart.”

The back half is a reference to the Giants Despair hill climb race that takes place every year that I always attended with my family. If you’ve ever been to the race and sat on the Devil’s Elbow, you can easily visualize how I felt my personal relationships were going at the time of that writing.

“Five Alarm Fire” is the A-Side to the track “The Flame” from my record “Collecting.” “Five Alarm Fire” is probably the second song I wrote as a solo artist, and it obviously plays with the themes of the most intense parts of a romantic relationship. It’s romance when the glass is filled. The Flame, on the other hand, that glass has just been thrown against the wall and that fire has scorched the earth and all of its inhabitants. So like Smokey the Bear says… be careful playing with fire.

“Electric Lovers” is a song I wrote for the second Brew Sessions. The Brew Sessions is a yearly event I invented that marries songwriting, art, and beer homebrewing. In a nutshell, the Luzerne County Brewers Homebrewing Club and I get together and decide on a few beers that the club is going to brew. We come up with random names on the spot; then musicians and artists are paired up with those beers. The musicians write songs based on the names of the beer, and the artists create artwork based on the names as well. We pick a date and meet up, and the brewers brew the beer at Simply Homebrew in Drums and the musicians record the songs they created live in the basement while the brewing is going on. A month later, we meet up and have a party at Turkey Hill Brewing in Bloomsburg, and the beer is released as free samples, the music is released as a record, the bands play, and the artwork that was created is on display.

It’s been a big success, and last year we asked people who came to the show to throw some money in a growler if they took a record and ended up raising $400 for the Bloomsburg Women’s Shelter, which is not bad for a beer party.

I usually let the other artists pick through the beer names first and take whatever is left, so this year I got “Electric Lovers.” I had a few weeks to write it and settled on a song about a person longing for a jolt in their life but just can’t seem to catch a break.

“Ragweed Summer” was my attempt to pull myself out of the doldrums of the first record. I was going through some heavy stuff in my life at the time of “Collecting,” which is why that record ended up being so intense. I had three back surgeries and recorded a lot of it bedside with a mic pulled up close, which is why that record ended up being very stripped down. So for “Even Giants Despair,” I wanted to get some rhythm going and write some happy songs, so “Ragweed Summer” was born, which is a song about that first time you fall in love.

NS: Is there a place online where people can find out more about you and your live performances?

TH: Yeah, most of my music you can listen to and download for free on my website, tonyhalchak.com. All of my shows are listed and updated regularly.

NS: Thank you for coming in, Tony.

TH: Thanks for having me. 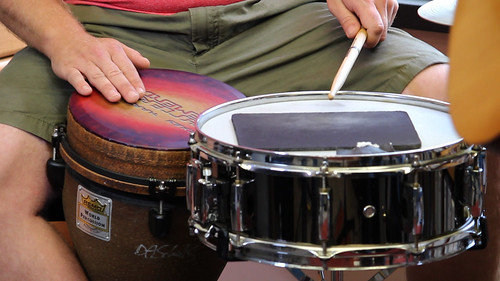 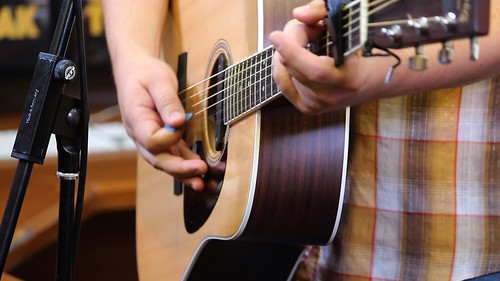 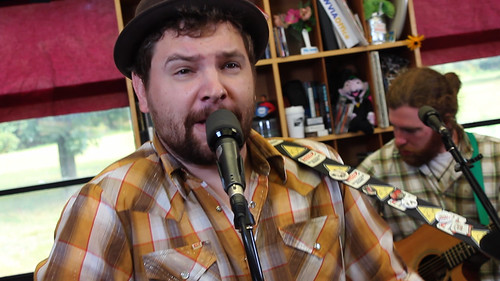 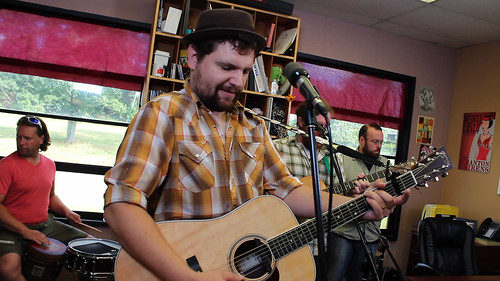 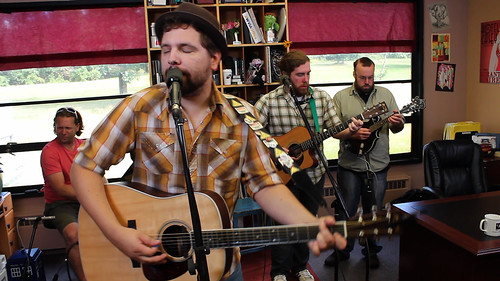 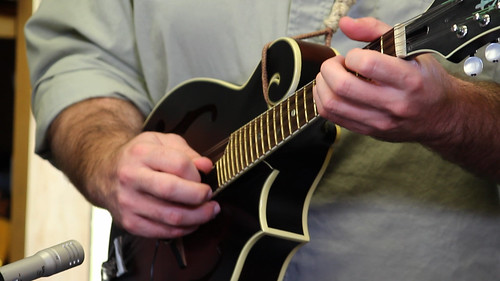 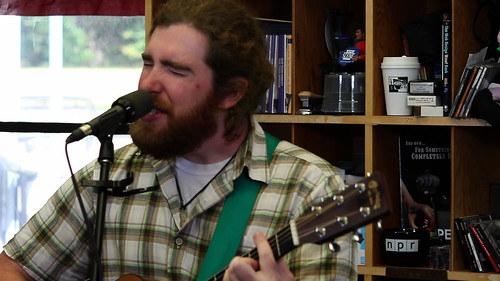 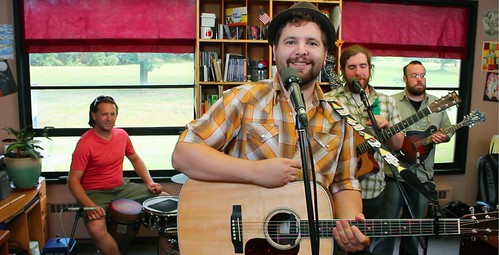 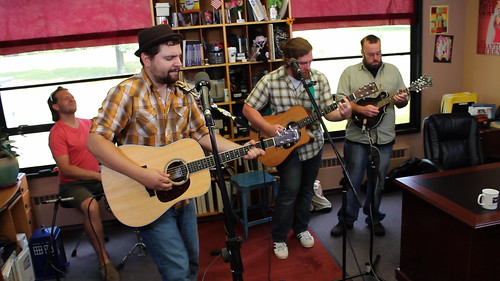 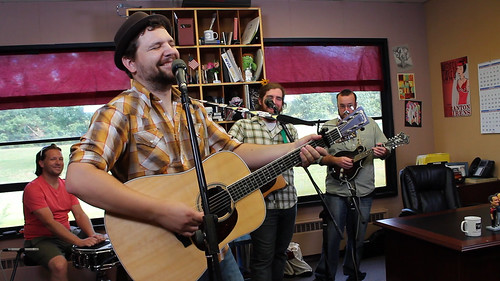