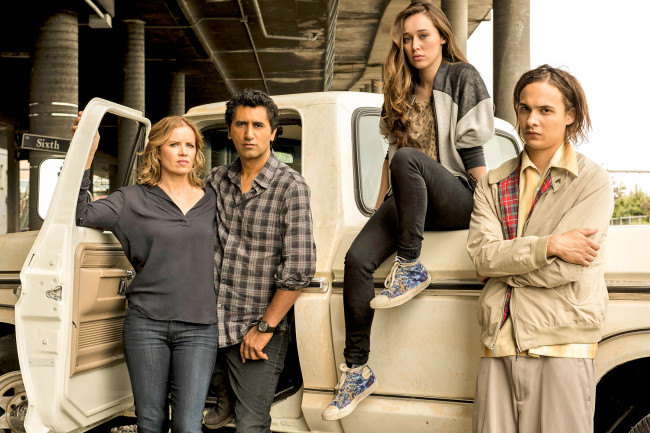 In almost every zombie apocalypse story I’ve watched or read, we follow a main character or two who meets up with other survivors during his or her travels. They learn to trust each other and work together as best they can, and the story focuses on this new “family,” even as they lose members here and there, until the very end. But let’s imagine for a moment that there is no main character – after all, life itself has no main characters.

Let’s imagine that we have a series of six episodes to tell a brand new tale. Each episode is about an hour, which is just enough time to tell one short but uniquely compelling story of one singular character. In five episodes, we follow five completely different characters, each going through something totally different before they reach the final episode, where all these strangers meet up together by pure chance in one location – maybe trapped in the same building by a hoard of zombies – and they must work together to survive. Without a true “main” character, any one of them could die, and because we’ve gotten to know each one, it’s heartbreaking when any one of them is torn apart in the ensuing chaos.

That’s a scenario I thought of 10 minutes ago that’s infinitely more interesting to me than what transpired in Season 1 of “Fear the Walking Dead.” Give me another 10 minutes and I can probably think of 10 more. Was this show written over a weekend on deadline? What the hell happened?

“Fear the Walking Dead” had the perfect opportunity to be a game changer. After five seasons and 150 comic books of roughly the same format in “The Walking Dead” – fight zombies until a safe place is found, safe place is compromised by people either inside or outside of this place, survivors must go find a new safe place, repeat – even co-creator Robert Kirkman has noted in various interviews that changes are needed every once in a while, making alterations to the television series himself that have strayed from the comics to keep people guessing or make writing easier (Rick loses a hand in the comics, for example, but not on the show, as this proved to be a pain to constantly write around). In the zombie apocalypse scenario, this repetition is really inevitable, but “Fear the Walking Dead” takes place just as it’s all beginning. Therefore, it should be different, right?

Apparently not. It not only rushes to dive into this same format by the end of its first six episodes, but the quick journey there is led by a dysfunctional “family” of characters that make up the least compelling cast they could have tossed into this scenario. When “Fear the Walking Dead” premiered on Aug. 23, there was so much moaning and groaning about what a disappointment it was – from friends and general Internet complainers – that I dismissed them all as impatient zombies unwilling to give the show a fair chance. By the finale, I was bitten by the same animosity and confusion and joined the chorus of complaining. How did it all come crashing down so swiftly?

I kept asking myself that during every episode, and I came up with two major answers:

1. Every character is awful.

It’s horror movie 101 – if you’re rooting for all the characters to die, necessary elements like tension and suspense become laughter and derision. I wanted to like someone, anyone, in this series, but every character came off as selfish or annoying in some form or another. Madison Clark is a mother who seems more concerned about feeding her son’s heroin addiction than absolutely anything else, even her family’s safety. Her kids, Nick and Alicia, are entitled “millennials” who seem as bored with their lives as I am, and when Nick starts stealing morphine from a dying man while whining about needing his “medicine” every five minutes, I hoped for an overdose that never came. Madison’s boyfriend, Travis Manawa, the “moral compass” of the show, doesn’t think it’s OK to kill one guy but goes along with a plan that includes letting all his neighbors die without a fighting chance and unleashing thousands of zombies on the National Guard’s headquarters that is full of innocent civilians and helpless hospital patients in the hopes of possibly saving two people. Our hero, everybody!

Also in the mix is Travis’ ex-wife, Liza Ortiz, and their son, Chris. Liza, while dull and bitchy, at least has good intentions here and there – Chris is a typical moody teenager, so I was wishing death upon him without or without the apocalypse. The other family they meet, the Salazars, have only one interesting story among the three of them, which is that the father, Daniel, tortures people; that’s so endearing when you’re looking for a hero in all this mess. Likeable, relatable, and sympathetic characters are a must in this scenario – even just a decent badass would have been welcome – but there simply are none to be found. Watching good people have to resort to bad things can be fascinating and thought-provoking – too bad everyone here already sucks as a person.

2. Every interesting thing that happens is purposely skipped over.

The writers made a conscious choice to set this in Los Angeles. It’s clear that they wanted to stay within a reasonable budget, yet they chose the second-largest city in the United States, with recognizable people and landmarks galore, so we’re sheltered from it all. Civilization is collapsing and we have a front-row seat in a city where movies are actually made, yet our view is obscured by the boring people listed above in a town filled with real-life characters. While I don’t think we should have seen celebrity cameos or anything cheesy like that, I expected something a bit more… grand.

It’s a huge city, yet we spend the majority of our time in a quiet suburb. There are riots, which we immediately run away from. Streets are overrun, though we only see them after everyone is dead or gone. An entire sports arena is filled to the brim with zombies, but we never watch how this transpires. Soldiers enter a building full of zombies while our “hero” waits outside in the car for the action to be over. Even the torture scene is one big cutaway. “Fear the Walking Dead” could have pushed the boundaries of action and gore much further than its predecessor with a setup like this, and yet it goes out of its way to ignore everything we’d want to see and replaces it with mundane bickering. This is not “character development” either because that would imply that we’re getting closer to these people; we still know so little about them individually that they’re as expendable as the extras in the background.

An average episode of “The Walking Dead” has more suspense, drama, and action than its spinoff’s entire first season. Don’t get me wrong – some of my favorite episodes are the “slow,” dialogue-heavy stories with barely any zombies at all, but those also contain characters I care about. Sure, some may be a bit over the top – machetes, eyepatches, monologues, and all – but corpses are being reanimated and eating the living here, so I’m not exactly looking for absolute realism – just people who I want to see roaming this barren landscape week after week. How did it get that way? Where did humanity succeed, and where did it fail? “Fear the Walking Dead” could have answered those questions and more. Instead, I’m left asking why AMC greenlit this thing.

Well, I guess the answer is obvious – “Fear” just became the highest-rated first season of any series in cable history. It accomplished that, however, by riding off the name of a much better show. “The Walking Dead” may be repetitious to some, but it broke new ground and earned its success with an incredible cast, some solid scripts, excellent special effects, and cinematic direction across five years. “Fear” is filler and feels like it too, which is why I’m so glad that the true “Walking Dead” returns for Season 6 tonight. “Fear” was renewed for another season before its first even aired, so they have plenty of time to get this next one right – if they even bother to try.

What if everyone brutally dies in the first episode and is immediately replaced with a cast worth watching? That makes two free ideas that no one else has done before, AMC. You’re welcome.