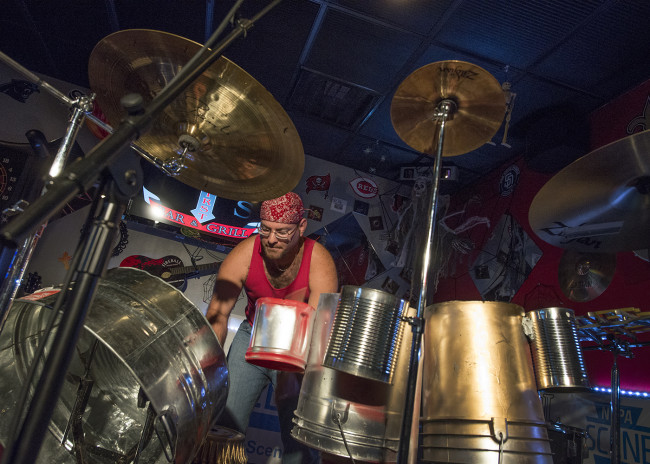 Every week of NEPA Scene’s Got Talent, our free open mic and talent competition at Thirst T’s Bar & Grill in Olyphant, we feature a quick Q&A with the latest audience vote winner, which was Plymouth percussionist and drummer Fred Emmett on Oct. 20.

We asked 34-year-old Emmett about winning Week 8 with his incredible drumming and theatrical percussion that utilizes buckets, pots, pans, and more to enhance his sound during performances.

NEPA SCENE: How did you hear about NEPA Scene’s Got Talent, and what made you decide to perform over the last two weeks?

FRED EMMETT: I was sent an invite to this contest last year and this year by performer and winner Grant Williams. I’m glad I finally got to attend it. I love participating in contests. The biggest part of it that I enjoy is the preparation, experience, and how you get to meet all kinds of people – musicians, artists, and other music lovers.

FE: I’ve had rhythm all my life, and I love to entertain. I love all types, styles, and kinds of percussion! I’ve been active with music since I was in my mother’s womb. True story – I was told that while my mother was pregnant and in church, her and my dad would feel me moving around a lot and kicking when the music and singing started. Also, playing with wooden spoons on pots and pans in the kitchen on the floor during my toddler stage.

My dad started taking me for lessons when I was 8 years old. When I turned 9 years old, I received my first drum set from my dad as a present for completing one year of learning. It was a black Thunder starter kit with German Camber cymbals. I completed Angelo Stella’s drum school in Hudson, Pennsylvania at the age of 14. I then had a Pearl drum kit.

I then studied commercial dance rhythms and the 26 standard rudiments, the scales of the drums. Throughout middle school and high school at Hanover Area, I participated and continued to study percussion. I had such music instructors as Donna Walters, Joseph Baranowski, Ed Teleky, Robert Jones, Paul Donnelly, Mark Allen, and Terrell Smith. I played in concert band, marching band, stage band, jazz band, county band, and district band. I also learned a lot from the drummers from my school that were older than me. I took lessons from Dave Diresco at Andrea Bogusko’s Music Company at 14 years old.

My last and current drum kit is an Oak Custom Yamaha with mostly Zildjian cymbals. I try out for events, such as Guitar Center‘s drum off contest and now NEPA Scene’s Got Talent contest. I keep myself busy in various music projects, open mic nights/jams, and bands. My future goal is to play more live shows and work on recording a solo and/or group percussion CD/album.

NS: What bands have you played in?

FE: I’ve played in local original bands such as The Love Crimes (psychedelic rock). I sat in with Katie Kelly and the Charming Beards (folk/country/bluegrass/rock). I also sat in with Badtown Rude (punk/ska), then worked in a rock fusion band called The Mother Brain. The most recent band that I founded, played in, and recorded with is North 81 (power rock trio); we recorded three songs together at JL Studios. I hope to get back working with them eventually.

NS: How did you get into these different kinds of percussion?

FE: I grew an interest in percussion mainly in high school and by listening to international percussion CDs. I’m still continuously learning and watching YouTube videos and tutorials on how to play. There is always a new or different style out there!

NS: Is it challenging to play so many different types of instruments in the same set? Do you plan everything out beforehand or just improvise when you’re on stage?

FE: Yes. I love the challenge of taking on all that percussion. I sketch out an idea in my mind and bring it to life on the stage.

FE: Yes, Stomp and the Blue Man Group have influenced me in playing. There are many various artists that have inspired me too, like Babatunde Olatunji and his album “Drums of Passion;” Art Blakey, a jazz drummer; Mickey Hart and his album “Planet Drum;” Ali Akbar Khan; Zakir Hussain; Stanton Moore; Tony Royster, Jr.; John Bonham; and Mondo Beats collaborations. Also, many international percussion recordings.

FE: Both a career and for fun. I love performing. Making a living from it is a plus.

FE: Shock, happiness, and trying to keep myself calm and focused.

FE: My performance has unexpected magic that happens. I always try to add something new to the show. It’s pure entertainment keeping the audience on the edge of their seat, wondering what’s going to happen next. Surprise.

FE: Everything I get goes to bills and my children. I do my best to make sure life is as comfortable as possible for my two boys.

FE: There are a lot of great local coffee shops, pubs, and venues to see original and cover bands, and it is always growing. I’m looking forward to performing and seeing bands in the Wilkes-Barre/Scranton area. I believe financial aid in theatre and various musical complexes would help immensely.

FE: I perform at and promote for open mics and jams all over the NEPA area. I look forward to working with Years of Madness.

FE: Fred’s World of Percussion on YouTube, Fred’s percussion ensemble on Facebook, Hoops and Loops Dream on Facebook, and North 81 on ReverbNation – I played on “Hologram Baby,” “Body of Te Rolla,” and “I Am Someone.”