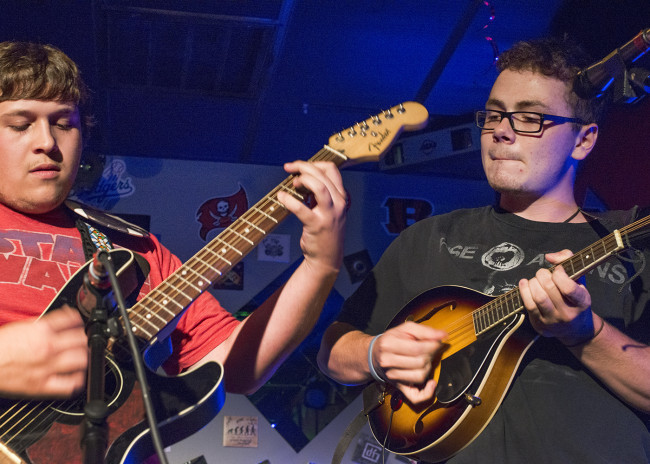 Every week of NEPA Scene’s Got Talent, our free open mic and talent competition at Thirst T’s Bar & Grill in Olyphant, we feature a quick Q&A with the latest audience vote winner, which was Scranton indie/punk rock duo Pulak on Oct. 6.

Vocalist/guitarist Connor Langan and guitarist Dom Ludovici are only 21 years old, but they’ve been playing music together for over five years and both are members of Scranton bands Karate Camp and Crock Pot Abduction. We talked to them about their new duo, Pulak, and winning Week 6 with their fun original songs and covers.

PULAK: Through Facebook posts and following NEPA Scene on Facebook. We have been wanting to perform around the area more and be more involved in the Scranton/Wilkes-Barre scene.

NS: For those who don’t know you yet, tell us a bit about your backgrounds as musicians. How did you both get started?

P: We’ve been friends for 10 years and been playing music in a band called Crock Pot Abduction since 2010.

NS: What musical projects are you currently involved in?

P: We are currently in both Karate Camp and Crock Pot Abduction together. Connor is also in the band The KLAP (The Kids Laughing at Pedestrians).

NS: Where does “Pulak” come from, and will you be putting out any music under that name?

P: There’s a character from the movie and TV show “Wet Hot American Summer” whose name is Victor Pulak; we thought the name “Pulak” had a nice ring to it. We might put something out in the future, but as of now, we’re just using it as our name for NEPA Scene’s Got Talent.

NS: It seems like you guys have a lot of fun onstage. How important is presentation and stage presence to your music?

P: Stage presence is just as important as the performance itself. If people don’t think you’re enjoying what you’re doing onstage, why should the audience enjoy it too?

P: If the opportunity ever came up, we would. However, a career in music is a tough thing to do. We won’t ever give up trying to make it happen, though.

P: Surprise, as there were such great acts on the same stage every time, and the competition was tough.

P: The passion and energy we try and put in the performance.

P: Dom spent his $25 on fast food and gas money. Connor spent his on Taco Bell and cheap beer.

P: Getting to be in the finals is honorable enough, being on stage with all the people who we’ve performed with. It’s going to be a fun and exciting night. Plus, we get to wear our monkey suits, and that’s pretty exciting.

P: There is a lot of great talent in this area; it’s really awesome. It’s just a shame because there is a lack of venues, and without a place to play at, there is no audience to play to.

Unless you’re a well-known band that bars want or you know the right people, you don’t stand a chance.
It wasn’t always this way, though, and it’s not too late to fix it. NEPA Scene is really doing a good thing in giving it a reboot and getting the community back together.

P: Karate Camp is going to be performing a live show for Holland Sound Studios’ live broadcast on Monday, Nov. 23.

P: You can find the music we play in Crock Pot Abduction on YouTube and Bandcamp. Karate Camp’s music can be found on Bandcamp. We are also on YouTube if you search.