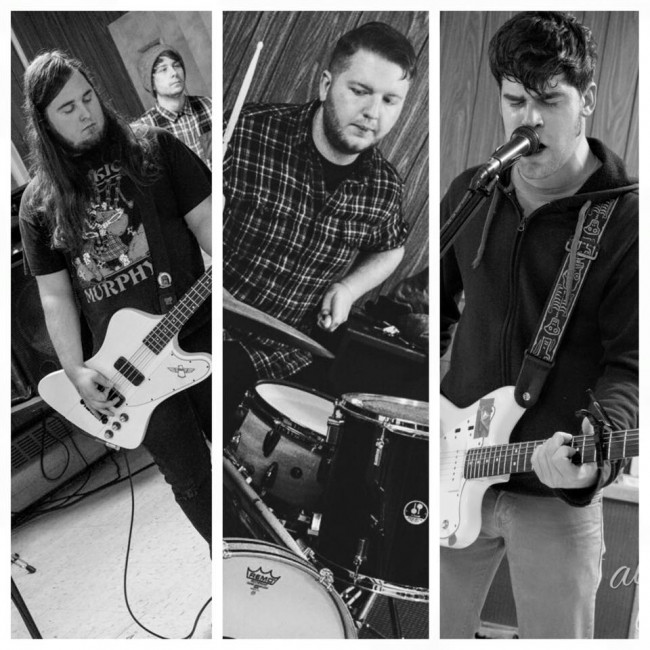 Scranton indie rock band Old Charades plan to release their debut full-length album “End Together/Start Together” by the end of 2015 or early next year, but they’re giving NEPA Scene readers an exclusive early listen to the truthful and personal first single, “When Countless Days Get Numbered.”

“This song is kind of like a combination of all the elements of the album put in the simplest form. It is a cool track from the album, but I think it very much stands on its own. I think a lot of the songs stand on their own, but there is that musical thread running through it,” vocalist/guitarist Sean Flynn said.

Formed in the summer of 2014 when drummer Jerry Connor asked Flynn to jam with him and write a few songs, they began as a two-piece that “was just different from what we were both doing musically at the moment,” Flynn noted. It was going to stay a duo until bassist Tom Lopes filled in and they found that they shared similar goals, becoming an Americana and folk-inspired rock band with an indie twist.

Despite this, “When Countless Days Get Numbered” didn’t come together easily.

“‘When Countless Days Get Numbered’ is a weird one. I would say this song was probably the most difficult one to get right. It went through about five different versions before it ended on what it sounds like. It sounds very straight ahead and simple now, but it was so far from it. I had seven pages of lyrics for it, and I was constantly going over it. The verses had a lot more lyrics, and they were long, but I was hating all of it. Finally, we just went, ‘I like this part of that riff and I like the way that part ends. Put that together,’” Flynn recalled.

“Lyrically, I just said what I was saying the whole time when we couldn’t get it. ‘I hate everything about what I am saying. I hate every sound I make with my terrible voice.’ Once I got into that mindset, it wrote itself. Once we finally got it, we all had a look like, ‘That is it!’ We love playing it. The chorus is pretty personal to me because I feel like I need to say that. I’ve never been more honest in a piece of music in my life. Plus, I give a nod to Woody Guthrie in the song. It’s like an Easter egg, but it’s clearly in there.”

It can be streamed and downloaded for free via Bandcamp, though fans who enjoy the track can also pay for it and name their own price:

The song was recorded and co-produced by their friends Billy Gerrity and James Barrett in Dalton, and its production was as authentic as its lyrics.

“We wanted people we trust with us and who were as much musical nerds as we are and would be like, ‘Use that guitar instead and try a different fuzz pedal.’ Fresh ears in the studio always helps. They were just great to have there,” Flynn emphasized.

“All the drums and bass were done at the same time, and I played with Jerry and Tom just to have the fullness when they tracked, and then I would go back with the guitar parts. They did the whole album in three takes pretty much. We purposely finished this one first because we wanted to get it out. The cool thing about the album is we wanted to make it as real as we could. What I mean by that is we didn’t record to a click track at all, and it was very much just press record and play. We wanted it to sound like us. We left little mistakes in, we left weird things in there that anyone else would be like ‘click click’ and delete. I love that it will sound a little weird and off at times because it makes it honest.”

A follow-up to their five-song EP “Songs from the Basement” with Lonesome Waltz Records, which was released back in March, the upcoming album will feature 10 tracks and include three “jazzed up” versions of songs from that initial EP.

“That EP was basically a super well-recorded version of us practicing the only stuff we had with Tom, who was still I think not fully with us yet, so it’s cool, but miles away from what we are now. We got a few more things to do with it, but it’ll be out soon.”

Listen to and download “Songs from the Basement” below: