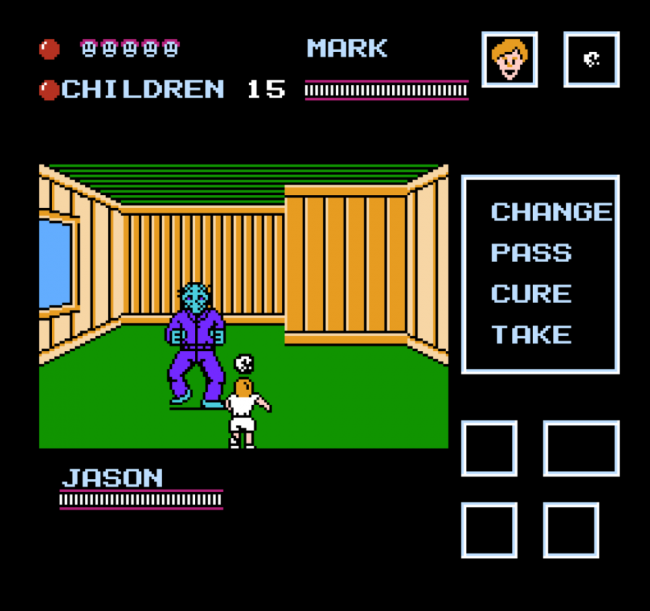 Here we are in the month of October! Did you know that this was the same month that I began here at NEPA Scene? It’s true, as my first article was published on my mother’s birthday last year. It’s been so awesome writing for all of you, so thank you for following along.

I say all of this in genuine good taste because I am now going to give you a month of cliché Halloween goodness as we take a look at some games that probably don’t truly scare anyone these days, but perhaps had some of us as younger gamers looking over our shoulders, leaving the lights on, or at least enjoying a creepy but fun adventure. It’s “A Retro Gaming Halloween” here on Turn to Channel 3, and we begin with a game that sells faithfully at my humble shop, and yet I’m not always sure why. Where would a Halloween-themed review column like this be without “Friday the 13th” on the Nintendo Entertainment System? Let’s get right down to it, shall we?

When I sit down to write, one of the first things I do is select the music for the writing session, and it is usually something that either drives me to work hard or relaxes me in order to do so. If one were to compare the music I listen to while writing to the soundtrack of this game, it would be like comparing an eight-hour sleep on a comfy bed to repeated ball-peen hammer shots to the groin. If you need another description, imagine being stuck in an elevator, listening to every popular Ariana Grande and Miley Cyrus song playing all at once, on loop, while gremlins rip at your cuticles.

If you find this too extreme, try listening to this stuff on loop for 30 minutes – chances are you will do what most gamers have done and just turn the volume down because all you really need to hear is the alarm that goes off whenever Jason is near. You can replace the rest with anything – a Frank Sinatra CD, the sound of your NutriBullet making a smoothie, whatever your heart desires – just please don’t subject yourself to this soundtrack. Don’t hate yourself that much.

While I think we’re all wondering why Jason was given the purple jumpsuit and blue-tinted mask, I think the bigger question is why all the cabins in this game are essentially the same on the inside, using the same first-person perspective as “The Goonies II” game. While I can understand and respect the sense of suspense this creates, it also seems incredibly lazy. The environments you travel in are fairly basic, but offer enough variety to both challenge you and keep you somewhat interested.

That being said, you can tell developers struggled with this one because, unlike other horror movie or horror genre games, Jason is the centerpiece and truly the only enemy worth mentioning when creating a game like this, so things like zombies and wolves were pulled in for variety, and yet all they really created was an annoyance that has endured all these years later.

Difficulty in games during this period is not uncommon at all, and some of the most beloved games in the NES library come with some pretty steep difficulty levels over time, but in the case of “Friday the 13th,” you honestly wonder if they wanted the fans of the movie to hate the game. It isn’t just hard to beat Jason – it is ridiculously hard, to the point where this game can span hours, if not days, of trying to locate him, get a strong enough weapon to kill him quickly and, oh yeah, keep as many of your counselor friends and children alive. Did I mention that when Jason is near someone you want to save, it is usually on the exact opposite side of the map from where you currently are?

Yes, the woods are creepy, but it doesn’t change the fact that the direction in this game is weird, fighting Jason is hard, and his mother, in all her Medusa-loving glory, is no peach either. Things like this can get repetitious and annoying over time, leaving even the most diehard fans of the films wanting nothing more than Voorhees himself to find all those responsible for this and drag them into Camp Crystal Lake. There is no real variety in the choice of counselor, yet seemingly whichever one you choose has some glaring shortcoming that makes you wish you chose someone other than that puny weakling.

Again, as I said at the top of this review, I don’t really know what the appeal is with this game, although I can certainly understand why so many people remember it, even past the obvious fact of how popular the “Friday the 13th” films were by this point. That being said, I think the main reason a game as poorly made as this still has so much notoriety is because, like the children of the 1970s who were seemingly issued the album “Frampton Comes Alive!” as a gift for being born, parents who could not afford the games every child wanted, like “Super Mario Bros. 3,” “The Legend of Zelda,” and “Mike Tyson’s Punch-Out!!” firmly believed they were buying their children the best thing going with “Friday the 13th,” when in reality they might as well have bought them an Easy-Bake Oven that burned their hand when opening it or a Speak & Spell that only taught them how to speak Pig Latin.

If you’re someone who is overrun with nostalgia for the films, or even enjoys the masochistic pain that often come with playing games developed by LJN, then please, by all means, indulge yourself to your heart’s content, but this is not a quality game – not even close.

Things are already getting painfully scary early on here at Turn to Channel 3, but thankfully we are stepping away from the shores of Crystal Lake into the world of the Belmonts as they make new alliances and tackle new challenges in “Castlevania III: Dracula’s Curse” on the NES! That will be next time, so until then, enjoy whatever autumn means to you and remember to always game on!