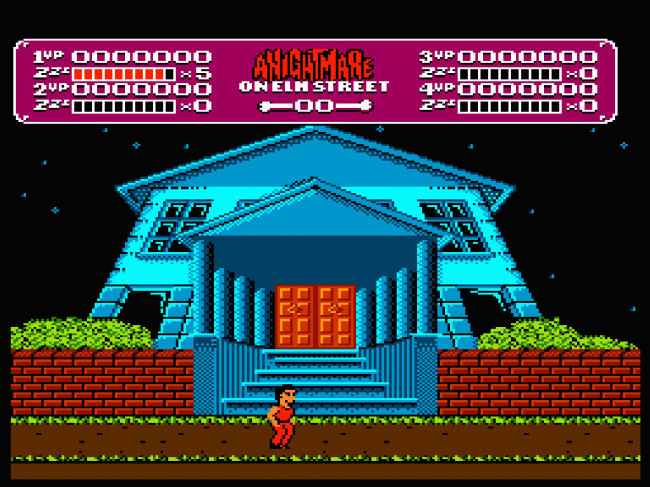 The retro gaming community, like any other community of like-minded people, has a lot of running jokes, a lot of common thoughts and memories that unite us, and one of the most well-known is how so many of us were tricked by that beautiful LJN rainbow logo on the box.

We were tricked into believing we were playing a quality game, usually one tied into a piece of pop culture or movie around at the time, when in reality we were given subpar garbage loosely related to the subject matter; a prime example of this would be the “Friday the 13th” game I reviewed two weeks ago. I will go on record saying that LJN never got it completely right, but at times, they definitely tried harder than we expected them to.

On the heels of said “Friday the 13th” abomination comes “A Nightmare on Elm Street” on the Nintendo Entertainment System, which recently celebrated its 30 years here in North America. Did LJN finally hit a homerun or did they strike out again? Get those freaky claws and old man sweaters out, kids – it’s prime time for “A Nightmare on Elm Street!”

“A Nightmare on Elm Street” (NES)

One of the many harsh critiques of most LJN titles is the fact that most of their soundtracks don’t really fit the subject matter or, more so, really capture the essence of the license being depicted in the game. We’ve already discussed the horrible soundtrack to “Friday the 13th,” with music that is best used to describe what an evil dentist would use to scare their patients but, fortunately, in the case of this title, the soundtrack is pretty good – not great, but pretty good.

The soundtrack captures the mood of the environment your player is in, as well as fitting in really well with the movie title it is tied to. The sound effects are your basic jumps and punches, as well as attacks from enemies, but there’s enough here to rise above the standard lackluster soundtracks on most LJN titles.

Those familiar with LJN know that you’re getting the same small, squashed-up character sprites we see in their games, which is fine, but “A Nightmare on Elm Street” falls victim to the same issue as “Friday the 13th” in that, with Freddy Krueger being the focal point and the movies not really having many other enemies, LJN was forced to throw in some very random enemies, which somewhat deludes the quality of the game. While I enjoyed the fact that enemies can change during the switch to the dream world portion of the game, using things like spiders, zombies, giant snakes, and these wolf/rat-type creatures is just plain lazy.

There will always be a part of me that feels developers with access to major movie licenses of the time didn’t push the NES hardware to its brink, and if they did, they would have made much better, more well-rounded games. The environments in the game are pretty bland, with these spooky houses lining the sidewalks and the insides looking pretty basic as well. Entering the dream world adds a fresh coat of paint to things, but it doesn’t do enough to bring the graphics to the next level.

When you really strip this title down to its bare bones, what you have is a fairly basic action platform game with simple attacks, enemies without much depth, and a formula that consists of making your way to a spooky house, getting through to the end, and facing off against some form of Freddy Krueger. While the boss fights with Freddy are far more linear than in “Friday the 13th,” I found the challenge of getting to him far more rewarding than tangling with the random attacks and sightings of Jason Voorhees.

In a game like this, you want to keep as much suspense as possible, so while some gamers may prefer the random and shocking attacks of the villainous horror star more appealing, I found the shock and surprise of what form Freddy took much more suspenseful, calculating, and requiring more strategy than simply grabbing a pitchfork, dodging Jason’s attack, and poking away at him. “A Nightmare on Elm Street” may not be a game with a lot of replay value or even stellar gameplay in comparison to many other action platform games, but it has enough there to give it more of a challenge and less frustration than our romp through Camp Crystal Lake.

“A Nightmare on Elm Street” is a far more difficult game to find than other LJN titles, and while that may suggest this is because it is among the better titles on the console, I’m not here to agree or dispute that opinion. I will say, however, like many LJN games on the NES console, we are left wanting more, even though we are getting an experience that at least appears to try to connect the dots between the movies and the game. I wouldn’t consider this game a complete abomination and insult to the fans of the movies, but once again, I feel like LJN developers put blindfolds on, threw some darts at a board of ideas, and just came out with something that was average at best, and yet far better than many other movie licensed games they developed.

In baseball terms for all you New York Mets fans out there, LJN tried yet again to swing for the fences, and while they didn’t bunt, they were lucky to get on base with this one. Still, if you enjoy simple action titles, then this is worth picking up, but don’t expect anything to wow you because this is, without a question, a “what you see is what you get” type of game.

Wow, can you imagine that next time, I will be celebrating one full year of writing for you folks here at NEPA Scene? It’s been a blast, and to commemorate that, we will be looking at one of the most difficult games on the SNES, and yet it is among the most celebrated – “Super Ghouls ‘n Ghosts!”

Until then, pile that Halloween candy into a bowl, turn your television to Channel 3, and always be ready to game on!