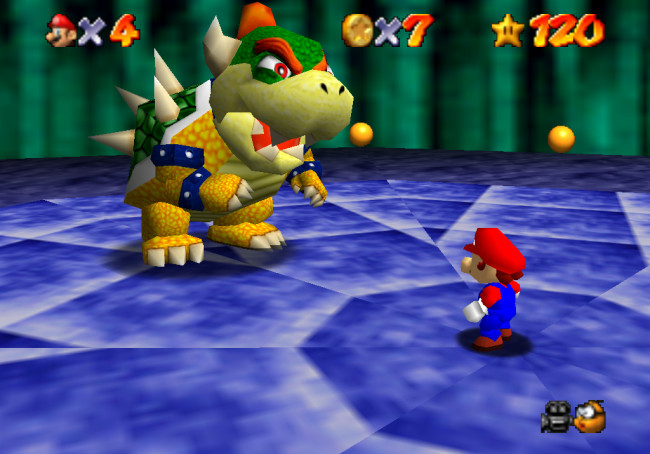 Video games were in a scary place in the mid-1990s. The days of 2D graphics, especially in the realm of tried and true platform titles, were beginning to fade away, looking quite long in the pixels, as it were. The problem was that many 2D gaming staples had developers behind them that feared the worst when making that leap to 3D, and in some cases, they were right to. Still, despite many gamers being doubtful it could be successfully pulled off, with pressure from games like “Crash Bandicoot,” Nintendo took their most famous character, their beloved mascot, Mario, and gave him the 3D treatment – thus, “Super Mario 64” was born.

We’re not here today on this – the last entry into the “64 September” run of Turn to Channel 3 as we move into October – to discuss the impact of this game on the industry. That is simply undeniable at this point. We are here, however, to see how this game has aged over the years, and whether or not it is still compelling and entertaining enough to keep a gamer occupied and enthralled. It’s time to take the pipeline to the Mushroom Kingdom and warp into “Super Mario 64!”

One of the main points detractors of Nintendo’s use of cartridges in 1996 in comparison to the rise of disc-based play noted was the notion that a great soundtrack just couldn’t be crammed into a cartridge in a way that was pleasing to the ear and as well-done as a CD, and while we can spend the rest of this article squabbling over who is right, what is quite obvious is that composer Koji Kondo, a true musical prodigy, puts in one of his more inspired performances here, proving that yes, even in 1996, good soundtracks could be produced on cartridges. While some can argue that certain level tunes are cheesy, as you progress through the game, the music seems to showcase just how good they fit with the levels they were created for. There really is a tune there for everyone.

It is certainly worth mentioning that this was the first “Super Mario” title where Mario’s personality really shines through, creating the Mario we know and love today. With so many of his new moves at the time, his voice is matched to many of them, creating a spunky Italian plumber of grunts, whoops, and hollers. Many of the enemies also have some solid sound effects behind them as well. For this gamer, nothing compares to the opening moment and the sounds of Mario’s surroundings.

While not as smooth as later 3D titles for the N64, the significance of Mario on this level cannot be understated. 2D Mario titles were certainly a lot easier to design, but this vast world created takes you even deeper into the Mushroom Kingdom than we had known at that point for over a decade. That said, the fact that, at times, we are staring right through objects, as well as the presence of draw-ins, cannot be ignored.

Despite that, the colors and textures used here are both lavish and brilliant in design. As with any major gaming franchise making that leap to the next level of technology, there are certainly growing pains, graphically or otherwise, but in the case of “Super Mario 64,” the achievement overrides any pesky limitations that are certainly visible now, nearly two decades later.

When discussing some of the greatest games in the genre, debates always seem to arise about where exactly “Super Mario 64” abides, but there are some things to keep in mind if you do engage in this discussion. Unlike all Mario titles prior, “Super Mario 64” isn’t as strict a linear title in comparison, encouraging exploration and experimentation among gamers who pick it up for the first time. While some may say this doesn’t make it a traditional Mario game, my only reply to that would be that while I can agree with that sentiment, in actuality that fact makes it a better Mario title than those present on the SNES or NES. I’m not here to debate “Super Mario 64’s” place in the platform genre, but I can say, without question, that even after all this time, this is still a fun game to play, one that many of my customers look to be bundled with the N64 consoles we sell, and I do my best to oblige each and every time.

Chances are, if you grew up with an N64, this was the first game you played on the console. This is similar to how us older folk (yeah, I said it) played “Super Mario Bros.” for the first time. “Super Mario 64” wasn’t just the world’s introduction to the N64, or even the first example of what the N64’s hardware was capable of – it ushered in a whole new generation of gamers, the same ones that come into my shop clamoring for games on Nintendo’s last cartridge-based console in the company’s history. While so many gamers were quick to jump on the “hip and cool” Sony PlayStation bandwagon, “Super Mario 64” reminded gamers that Nintendo could still make quality games that everyone wanted to play.

Well, that does it for me this month. Join me next month as we take a look at some classic titles that, even if just for their era, went bump in the night.

Until then, drink pumpkin spiced stuff, apple cider, or do whatever makes you feel all autumn inside. While you do that, though, be sure to game on!