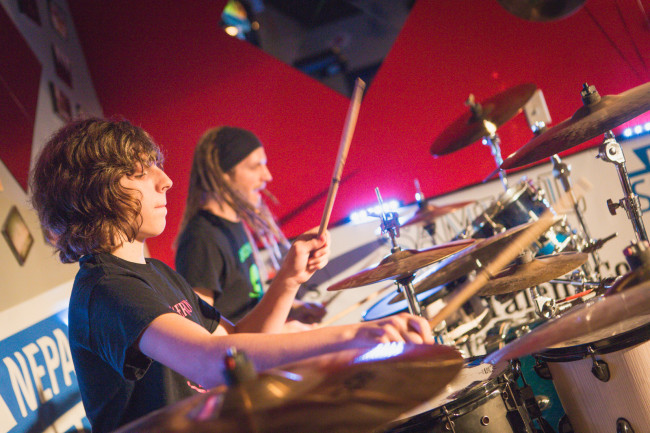 Every week of NEPA Scene’s Got Talent, our free open mic and talent competition at Thirst T’s Bar & Grill in Olyphant, we feature a quick Q&A with the latest audience vote winner, which was Roaring Brook Township drummer Tanner Snyder and his teacher, Zhach Kelsch, from Philadelphia on Nov. 3.

We asked 14-year-old Synder, also known as the DrummerBoy, about winning Week 10 with his impressive skills and what he’s working to accomplish in his ambitious future.

TANNER SYNDER: I follow NEPA Scene’s Facebook page and saw the post for Week 1 of NEPA Scene’s Got Talent. I wanted to perform from the first week, but my band was taking a break since school started. I talked to my drum teacher Zhach Kelsch; we decided it would be great if we did the project together. It’s hard for a drummer to play in a talent contest alone. We met once a week and started to put the drum battle together. We felt it was time to try it out last week and see what happens.

TS: I have been playing and taking professional lessons since I was 5 years old with Zhach Kelsh. I have performed with many local bands, including 40lb Head, J2, Six More Roads, Dashboard Mary, Kartune, and The Third Nut at picnics, rallies, and at my church, St. Eulalia’s in Elmhurst, most Sundays. I have done Keystone University Jazz Camp and performed in the Scranton Jazz Festival. I have had the unique opportunity of a mentoring session with Jim Riley, the drummer in country band Rascal Flatts. In 2012, I was a finalist for a national talent search called Rock Camp with Kidd Kraddick in the Morning, a nationally syndicated morning radio.

Last summer, I entered a national online competition called Drumerica, sponsored by Modern Drumming Magazine. As one of the youngest entries, I submitted a video that received the most views and likes on YouTube, topping 6,400 total views. I also have performed with musician Chris United at the Landmark Theatre in Syracuse, New York for BeatleCuse, where I met Gene Cornish from the Rascals and Mark Hudson, Grammy Award-winning artist and member of the Hudson Brothers. I also performed at the The Bitter End New York Show Case for Cystic Fibrosis, presented by Youth Arts Forum, in March 2015 and Nicstock in New York this summer. I also worked with a nonprofit, Making Music Matter for Kids, and have been featured on the Ryan Leckey Live morning show through the years.

NS: Why did you choose the drums?

TS: I was introduced to the drums at the age of four, when my parents brought me to a North Pocono High School parent-teacher conference for my older brother. I spent the entire time staring at the drums in the band room until band director Frank Turquato took notice and asked me if I wanted to play them. After a few minutes of drumming, as my family was getting ready to leave, I went to return the drum sticks to Mr. Turquato, but instead was told, “No. You keep them. You’re going to need them.” I still have the drum sticks.

NS: How did you meet Zhach Kelsch, and what specifically have you learned from him?

TS: Zhach was a drum teacher at a music school where my parents took me for my first drum lesson. At the time, he lived in the area, and now he lives in New Jersey, but travels every Tuesday to give me lessons. He is not only my teacher and mentor; Zhach is an accomplished musician and drummer in New Jersey, Maryland, Virginia, and Pennsylvania’s music scenes. He is in a very popular traveling band called Kristen and the Noise. He teaches and is a studio drummer.

We have a great relationship, and he just gets me. Zhach taught me rudiments from the beginning, and I did not learn my first song for four years. I believe he gave me a great foundation, and that is how I learn songs now. When it comes to learning songs, I can pick up the main beat of the song in about one minute. I can just feel it, like I have a built in metronome in my head.

NS: Tell us about this dual drumming act you’ve developed with Zhach.

TS: We built the foundation of the drum battle off of Godsmack’s drum battle. Zhach made it our own, by including some bass beats and a four measure of “Talk This Way.” The best part was I got to do it with Zhach and had a great time.

NS: You’ve played in a few local bands, from rock to jazz. Is it challenging to learn all those different styles and switch between them, depending on the gig?

TS: I am not intimidated to perform on stage with older musicians in front of large crowds. I do not have a hard time with rock, punk, or pop and try to keep learning new songs to increase my song list. I have played songs that I never heard before but keep up with the beat. Jazz is more difficult; playing it is a completely different kind of feel, and I am still learning. I just want to play and perform.

NS: Tell us more about your own band and what you’re doing with them.

TS: I have my own band with Awnshae Smith, Austin Sokolowksi, and Matt Wrubel. I work with a few bands and hope in the future to have a full-time working band. I want to work specifically in a punk/pop kind of band and Top 40. I am always looking for new opportunities.

TS: I can’t imagine doing anything else other than playing music. It’s not a question of if I’ll make it, but rather when. This is what I want to do. I want to be a professional musician and play the drums. I want to be on stage and look down at all the screaming fans. If I don’t make it as a professional musician, I will teach and be a studio drummer. I will be going to college for music technology and teaching.

TS: I was very excited! I am glad to do a great project with Zhach. We had a great time, and I hope to do more projects with him.

TS: I believe the drum battle was different and not something you see every day. I do have full support from my family. They’re my biggest fans.

TS: My mom put it in my bank account towards my car, when I am 16, although I would have like to frame it or spend it on video games.

TS: Just being in front of a large crowd doing what I do, playing the drums with my best friend, Zhach. They don’t call me DrummerBoy for nothing. I got my name from my football coach because drums interfered too much.

TS: There is not a lot of opportunity for kids my age who are serious about music. I want to play now; I don’t want to wait until I get older. I want to entertain. I would like a place to go and hang out with kids interested in music. It would be great to just be able to jam.

I think there is a lot of good adult musicians and bands out there who have helped me through the years. They let me sit for a song or two at shows, and it really helped me love music and learn how to rock.

TS: I try to focus on one project at a time, so NEPA Scene’s Got Talent is my gig. I just finished North Pocono Marching Band, where I played the quints. I am also in band, Orgestra and Steel Drums, at NP. I will be performing in February at the Landmark Theatre in Syracuse, New York for BeatleCuse. Mark Hudson liked Chris and I so much they invited us back next year to play on the main stage during BeatleCuse.