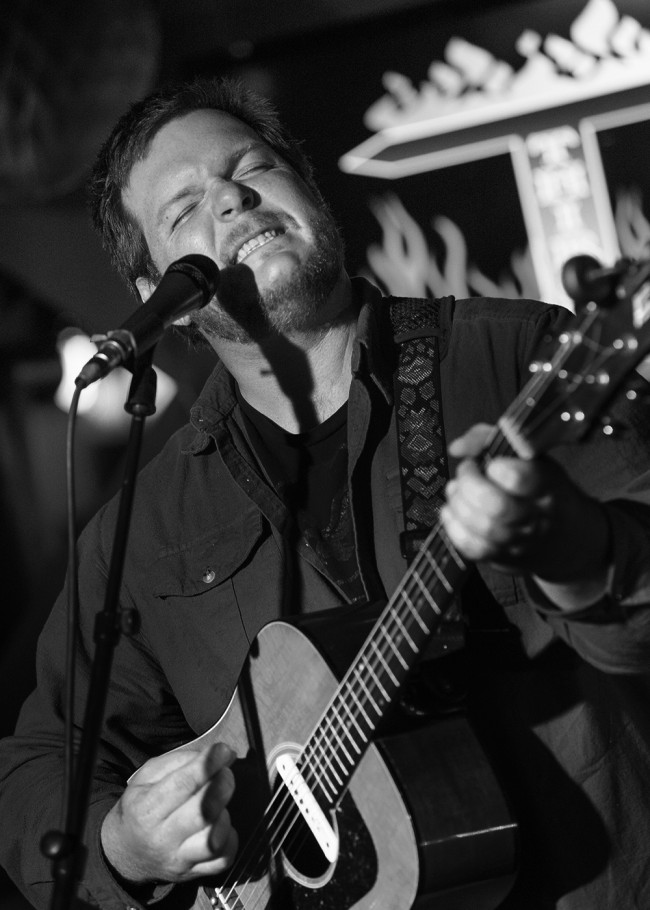 Every week of NEPA Scene’s Got Talent, our free open mic and talent competition at Thirst T’s Bar & Grill in Olyphant, we feature a quick Q&A with the latest audience vote winner, which was singer/songwriter Bradley Maurice Kingsley on Nov. 10.

We asked 36-year-old Kingsley, who has roots in Long Island, the Poconos, and Wilkes-Barre and recently relocated from Bethlehem to Olyphant, about winning Week 11 with his soulful and bluesy original songs and covers.

NEPA SCENE: How did you hear about NEPA Scene’s Got Talent, and what made you decide to perform over the last few weeks.

BRADLEY MAURICE KINGSLEY: I had seen the flyers for it at Thirst T’s when I’d come to check the place out in the late summer. The great vibes and support that everyone gives each other at this event is amazing, and the place has such a good feel. I think it was Week 5 or 6 that I came by to finally check it out and throw something down. I loved the music and comedy and poetry that I heard and had a really great time. Not knowing a soul in the place when I got there, by end of the night, I made some new friends and came in third place. You convinced me to come back and give it another shot, so I did. I wish it wasn’t almost over; it’s a great time.

BMK: I got started with a Sears Silvertone electric and a Gorilla amp when I was about 14 – loved making noise with that setup. I was in a few rock, hippie, goth, and punk/core bands in my teens and early 20s, and when life would spin out on me, I’d be inspired to write poetry and music to deal and find some relative balance.

NS: You seem to have some blues and maybe some folk and country influences in your music and performances.

BMK: That’s funny! Guess it kind of just comes out like that. Some people learn to play the blues and some just live the blues, I guess. I’m just blue, no way of getting around it. Yet, for some reason, I find such a release in embracing those feelings and telling their story, ultimately expressing my story, I suppose, that the catharsis itself produces those moments of nirvana and freedom from being down. Being that the first half of my life has been that of the likes of an “Afterschool Special,” then it makes sense that during my time now of reflection and repair of the past that I may come off a bit country at times. Guess it depends on how my soul wants to come out in those moments.

NS: Tell us about your original music. Have you recorded any of it?

BMK: I’ve been told that it sounds like drunken lullabies from an old, broken-hearted soul. Thanks to some great friends, I’ve been lucky enough to record for a few different projects over the past several years. Never got around to making a legit album. I’ve got the material; I honestly just don’t know what to do with it. Suggestions are welcomed.

NS: Where do you draw inspiration from when writing your songs?

BMK: Sometimes, I feel like I’m on fire with inspiration – obsessive, manic, and uninhibited. Sometimes I’m so spun out and spent on feeling down and blue that I can’t see the forest for the trees. My inspiration has always been chasing the dragon for those moments of balance and clarity that lie in the spaces between.

You could say that I’m a pretty heavy dude. When I write a song, it represents a feeling of a moment in time that necessitates personal understanding and compassion. Without either of those things, I wouldn’t be able to get out what’s trying to break through. In trying to capture these emotions, I’ll find myself writing lyrics that are sometimes cryptic, even to myself, as I somehow know that I may not be ready at the time to deal with something head-on, yet, over time, the song helps me to get where I need to be to ultimately find my way.

I need to have that compassion for myself to be OK with not being what people want me to be or think that I’m supposed to be. My process is my therapy, and the music and verse that come from it become the medicine that I can take as needed to treat any arising symptoms of conformity, apathy, or hopelessness.

NS: It seems like there’s a lot of emotion in your performances too. Is the presentation just as important to you as the music itself?

BMK: Every time I perform a song, it takes me right back to the genesis of the feeling and those moments and it runs over me. Not like a truck as much as rain, really, or a storm, or even, on those rare occasions, a warm bath of sunlight. I believe in being present in the moment, as Ram Dass says, to “Be Here Now,” as that really is all there ever is – this present moment. So, when I have the chance to really release, it comes pretty heavy.

NS: Tell us about The Lonelies Tour and your involvement with that project.

BMK: My friends Jay Morgans and Robb Brown “welcomed me into the folds” of The Lonelies Tour for its debut back in 2008. It was an amazing idea they had of featuring a lineup of singer/songwriters that would share in a night of music and stories about love, loss, heartache, and soul.

Robb told me about their idea back when I met him and Jay (who still calls me Spider) in 2001, and I thought it was great – definitely something I’d come out to see. Seven years later, a mutual Myspace friend of ours, Rob Alapick, who at the time was working with Doug-O on Media-3 Entertainment (Shocker!) was putting together an acoustic show at a new club in Plains. When we were talking about the lineup and both Jay and Robb were on it, I couldn’t help but think, “Lonelies Tour?” It was more than fitting to have our first show the day after Valentine’s Day for Jay’s CD release. I was humbled to be playing with the likes of these cats – Jay, Robb, and Terry Childers are amazing songwriters.

I just reconnected with them recently and hope to get in on some more of that.

NS: Have you been a part of any groups or bands before or since then?

BMK: As Maurice Bradley, I played for some years down in the Pocono area and began my B-Sides Music project. Whenever I’d play out, people would ask me to play songs that you could already hear on the radio, and that’s just not my style, so I called it the B-Sides Band to try and convey that thought, kind of like a disclaimer for anyone coming out that might expect typical cover band tunes.

The members and instruments have changed over the years, as I’m sure it will continue to morph. The present collective of myself, Chuck Kraakevik on tenor sax, and Fernando Villafane on congas/percussion is eclectic, unique, and a hell of a good time.

BMK: I would love nothing more than to write, record, and perform music for a living. Whether that ship ever comes in for me or not, I’ll still be having fun trying to make it happen.

BMK: Stunned, surprised. There were so many great acts that night that for me to win, I felt modestly validated as a musician in such company.

BMK: I have to thank Justin Furstenfeld for helping me share the story of my life and connecting with what I’ve to share of my soul – and Katie Evans for helping me throw that down.

BMK: Seeing and hearing everybody throw down. Should be quite the shindig.

BMK: It seems that there are quite a few venues for original entertainment and never a shortage of things to do.

BMK: My band, B-Sides Music, will be playing a post-holiday show at the Pub in the Pines on Route 940 in Pocono Pines on Saturday, Nov. 28 from 9 p.m.-1 a.m., and I hope to be playing some local venues here in the future.

BMK: I have a few songs posted on ReverbNation under the Polar Diagnosis project I’ve been musing over.

There’s a performance at an art show in Bethlehem from February on YouTube:

And my first attempt at making a music video using a demo of a video editing program and some stock photos: