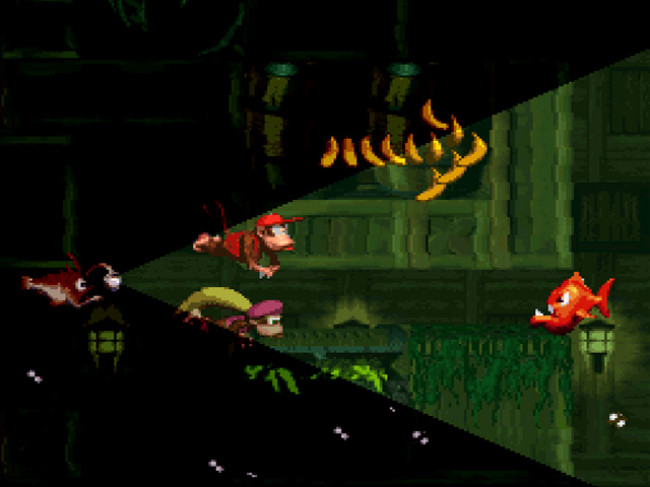 It’s November now, and even though it doesn’t feel like a typical November as I write this (it was 73 degrees today – not that I’m complaining), I’m here to talk about the games, not the weather, that I am most thankful for as we approach Thanksgiving. I will fully admit that unless I make some changes this month, all of the four games selected will be on the trusty Super Nintendo, my favorite console of all time.

We begin with a game that, while often touted as the best of the series, still doesn’t quite get the love of the original. Today’s topic on Turn to Channel 3 is “Donkey Kong Country 2: Diddy Kong’s Quest,” where we are introduced to Dixie Kong as the duo do their best to rescue the famed Donkey Kong from the evil Kaptain K. Rool.

I will be honest, readers – this is the first time in a very long time that I have sat down to really play this game. Sequels can often continue to build on what was created by developers in the original, while also getting harsh criticism for taking the franchise in an unexpected direction that is, at times, not appreciated by the devoted fanbase. To figure out just where “Donkey Kong Country 2” falls on this spectrum, read on!

David Wise, composer on all three entries in the “Donkey Kong Country” series, really shows off his talents in this game. While the soundtrack of the original game was stellar, with classics like “Aquatic Ambiance” and “Simian Segue,” Wise more than upped his game with tracks like “Stickerbrush Symphony,” “Jib Jig,” “Disco Train,” and “Forest Interlude,” all of which showcase a far more serious, sophisticated, and moody feel in comparison to the first “Donkey Kong Country” game.

The sound effects, while great, don’t really show as much growth when looking at the soundtrack for the game. This is some breathtaking music, folks, which is something I still feel sets the SNES apart from other consoles of the time, especially within the camp at Rare during this period of time.

I’ve always been impressed with video game franchises that, while they delivered in their first outing, have developers who are never satisfied with their previous work. Rare is a company that never rested on its laurels, always creating fresh, new, and innovative games with staples like a solid soundtrack and great graphics that really pushed the hardware given to them to work with. The graphics in the original “Donkey Kong Country” really raised the bar for what gamers would later come to expect; those lush, pseudo-3D graphics that truly were unlike anything in 16-bit games for the time. The sequel took what was already built and raised that bar – the standard of graphics in a “DKC” game – much more.

When you begin playing the game, you think to yourself that these are just pirate levels, as that is the main theme of things as far as the vast majority of enemies and early levels, but then the game takes things in completely different directions, adding things like volcanic levels, levels with thick mist and wind, and even levels that are completed while on a rollercoaster! These may not seem like big deals right now, but in 1995, no other game was this diverse in the levels created. When fans of the series wear their love of this game on their sleeves, chances are many are referring to just how clean, crisp, and inventive the artwork and design of this game really is.

“Donkey Kong Country 2” truly did expand on the foundations built by the franchise’s stellar debut in 1994. That being said, while there were moments where I truly enjoyed playing the game, there were also some instances where I felt a bit overwhelmed and frustrated by things that I’m sure my 13-year-old self would call me out on. The environment within the game really is vast in comparison to the original, with many hidden secrets for you to discover, which is great when you’re smart enough to know where to find them. This wasn’t a true deal breaker for me, but it was a challenge that definitely took some time to come to grips with.

Truly, the only aspect of gameplay that was beyond frustrating was the hit detection, which is more than questionable at best during key points in the game. I often found myself jumping from a vertical base and plummeting down as part of completing a level, crossing my fingers that I didn’t get taken out by a random spike or enemy that I couldn’t see based on how the levels are designed and the viewpoints you are given to work with.

Lastly, it did take me some time to truly master the tandem moves for Dixie and Diddy Kong, which is crucial in completing the game, whereas in the original “Donkey Kong Country,” this wasn’t something that was so heavily depended on by the player. Despite this, “Donkey Kong Country 2” has stellar gameplay that takes what you already know about the franchise and expands upon it in ways that are both familiar and yet distinctly its own design.

For many gamers, “Donkey Kong Country 2” was the high point in the three-game series on the SNES, and I think this is mainly because it is the most mature and complete-looking title out of the bunch. The follow up to this, “Donkey Kong Country 3: Dixie Kong’s Double Trouble,” didn’t quite have the same feel and sense of urgency in creating something fresh. Obviously, if you enjoy this franchise, you will want “Donkey Kong Country 2” in your SNES collection, and at a reasonable price with a lot of availability, it isn’t a difficult game to track down and purchase.

Could this be the masterpiece of the “DKC” series? I’ll leave that up to you to decide, but one thing is certain – the effort put in by developers makes this title more than deserving of the heaps of praise earned by gamers and industry insiders over the two decades it has been around.

Well, that does it for me. I sincerely hope you enjoyed this edition of Turn to Channel 3. Next time, we continue looking at sequels as we head to the mean streets in Capcom’s brawler “Final Fight 2!”

Until then, enjoy this unusual stretch of nice weather, but always make time to game on!