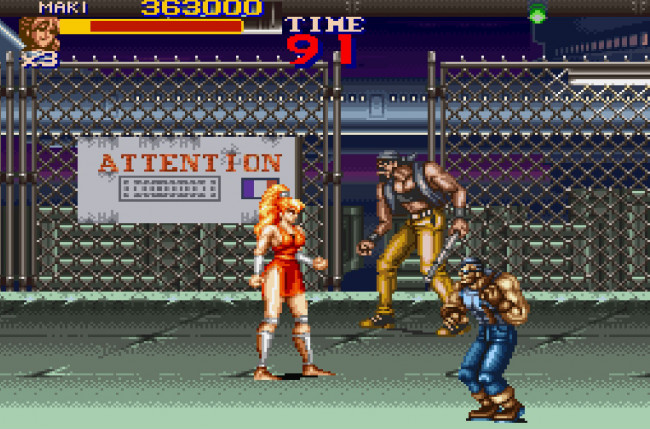 Sometimes, whether you’re a collector or just a small business owner, you have to travel outside of your comfort zone or deal with other business owners like yourself in order to find games you have been searching for an extended period of time. In the case of today’s topic here on Turn to Channel 3, we will be looking at a game I am quite thankful I purchased after the urging of my dear fiancée to do so.

We will be playing “Final Fight 2,” a Super Nintendo game that comes at a great price, especially if one is purchasing it in its original box. What direction did this sequel take the series, and where does it sit in terms of entertainment value when looking at all three entries individually? It’s time to hit the streets of “Final Fight 2” to find out!

It’s no secret that, like many Capcom franchises that get a sequel, “Final Fight 2” takes things up a significant notch in all categories when compared to the original. This all begins with some of the most stellar music composed for any of the three entries on the SNES. The importance of a good soundtrack to set the tone, the mood of the game, is always emphasized by this column and countless others, and Capcom knocked it out of the park in that aspect.

“Final Fight 2” takes the original concept of the game in a whole new direction in some ways, expanding on what was already there and creating an expansive environment that may seem simple looking back now, but at the time was so diverse and unique, and the soundtrack captures that. The music present on each level fits each section of the game perfectly, with one minor flaw. When the game takes you from a main portion of the level to another area or sub-area, the music is either identical or very similar each and every time. It would have been nice for a sub-area in China to have music similar to what’s heard during the main portions of the gameplay on that stage instead of hearing it there and then in every level to follow, regardless of what country you were in.

In the arcades, the original “Final Fight” had a gritty look to it that really didn’t transfer all too well to the SNES, really diluting the whole concept and overall feel of the game. Thankfully, “Final Fight 2” didn’t just throw a fresh coat of paint over what we would expect; they dazzled with a solid mix of bright, vibrant color combined with a lot of that same grit that was missing from the original SNES port. The levels really shine, and the bosses look awesome.

One of my biggest pet peeves in old school brawlers is what I call the “Golden Axe Syndrome,” where enemies are so often repeated with the only difference being a change in weapon and attire color. While “Final Fight 2” doesn’t do this, it does seem to use a lot of the same enemies over and over, but I still felt there were enough new ones introduced throughout the game that it didn’t feel like overkill. The characters are far more detailed and have a sprite size that works well with the game. I will say the new characters looked better than the stalwarts of the original game.

Don’t get me wrong – the scope of “Final Fight 2” did more than just continue the superb brawling roots of the original; it created a map of countries visited, along with new enemies and bosses, all while expanding on the original storyline. That being said, while many fans of titles like this complain about cheap attacks from enemies, my one gripe is a bit different and usually a major turn-off for those unfamiliar with the genre. While bosses in this game still have some majorly cheap attacks at times, I was far more frustrated by how cowardly some of the enemies were, going completely off-screen to the point where you wonder if they’re still there. The game refuses to let you go any further because you have to wait and defeat these chickens before moving on.

That aside, I found “Final Fight 2” to have some colorful and fun enemies to beat up, levels that were head and shoulders above many that were around in the genre at the time, and a storyline that was still simple enough to follow but enjoyable to be a part of. The controls were responsive, and I loved the varying attacks, strengths, and weaknesses of each of the characters you could choose from.

Despite being in a pristine box with all the bells and whistles, was “Final Fight 2” worth the $80 I paid for it? That’s certainly up to debate, as is my sanity for doing so and not buying something far more practical at much less of a price. What isn’t debatable, however, is that “Final Fight 2” may very well have been the high point in the series, although some argue that the final entry on the SNES was a proper send-off and the best of the best as far as the franchise goes. I am personally thankful for it because it took a core concept in a fresh direction while still maintaining those little things that made the original so beloved by gamers. “Final Fight 2” was truly not the final fight on the SNES, but it was definitely the series’ finest.

Well, there you go, another review in the books. Speaking of bringing new life to a franchise, get your Mega Busters ready, as we will be looking at “Mega Man X” on the SNES next week!

Until then, as we inch closer to turkey, family, friends, and Black Friday battle plans, be sure to find the time to game on!