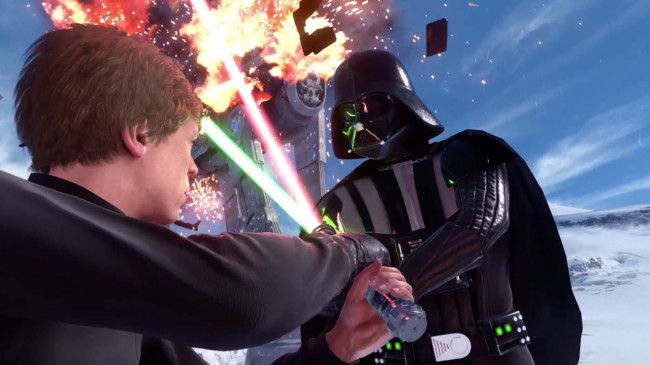 “Star Wars: Battlefront,” developed by EA and DICE, has been one of the most anticipated games since its first teaser trailer was shown at E3 in 2013. It is a massive, squad-based first-person shooter set in a galaxy far, far away, and it’s understandable why so many gamers were absolutely frothing at the mouth for its release on Nov. 17. From the breathtaking trailers rendered entirely from the in-game graphics engine – which are absolutely stunning – to the myriad of moments people have thrown up on YouTube from their time with the game’s beta, this game looks like it will be a stupendous time! With that said, I have a huge issue with this game, and it is not that the game will underwhelm the fans. This game is merely a microcosm of a more serious problem facing the gaming industry.

Multiplayer has been around since the birth of video games, whether we look at the home or arcade markets. People would gather to play games with their family and friends and pass the controller around round-robin style until their hearts were filled with joy! Multi-taps were created to bring the excitement up to four players on certain games, as well as for multiple consoles. And every console since the N64, barring the PlayStation 2 for some unknown reason, has included four-player functionality built into the hardware. However, while that function was and is still there to be utilized, a new form of multiplayer gaming has been established.

Rather than playing a game with friends in the same room, developers decided to move multiplayer online. The move made it possible for more than four players to tackle a game and allowed them to play against people from all over the globe. That’s awesome, as long as there is still something to be played at home. Developers aren’t just going to ignore the home aspect of a game in favor of online play, right? Unfortunately, the proof, as they say, is in the bloody jibs of one’s fallen enemies.

More and more, we see shorter and shorter single-player campaigns in favor of online action. This is most often seen in first-person shooters, like your “Call of Duty” and “Halo” titles, but games like “Assassin’s Creed: Brotherhood” – which, luckily, still had an amazing story and single-player mode – also focused more of their time on an online deathmatch mode. So… what happens when a single-player campaign is ignored completely? Simple – you end up with “Star Wars: Battlefront.”

To be fair, there is a single-player experience in the game, but it is merely a mission mode with a complete lack of an overarching narrative. At least split-screen gameplay is still an option in the form of cooperative missions, so you and a friend can get a taste of the action from the comfort of the sofa. EA and DICE have said that they will be adding more split-screen content in the future, as per the Internet’s response and complaints. It is promising that they are listening to what people are saying in an attempt to make this game everything that the fans have hoped for, though that is still far cry from a full-fledged story campaign (but that’s an argument for another time).

“Star Wars: Battlefront” may be a visual powerhouse and, by all accounts, the gameplay appears to be fun as hell, but you will not receive its full entertainment value if you have not already ponied up the money for the Internet access that the Xbox One and PS4 mandate for online play. What once was a free feature in the gaming world (save for the Xbox 360) has become monetized. My biggest gripe about this game doesn’t even pertain to the game itself – it is all about the culture of gaming in general, which is that Internet access on current gen consoles is not considered a right any longer – it is a privilege for the more fortunate!

In a world where online multiplayer access costs a premium, I call bullshit when it comes to online-only games, which is essentially what you have with “Star Wars: Battlefront.” The developers expect the consumer to pay $60 for their game, and then the console manufacturers want another $60 for their year-long Internet access subscription. And God for-fucking-bid you do not have the gaming system already, because that $120 price tag just roughly jumped another $350. Is this a fair practice? It sure as hell doesn’t seem like one to me, but EA, Sony, and Microsoft couldn’t care less. Face it, kids (or nostalgic adults), your entertainment is second to their bottom line. That’s why it’s OK for them to bilk you out of that hard-earned money of yours, and the problem is, the gaming population will of course subscribe to that online access because we “have to” do it to play these games to the fullest.

Look, I get it! Playing against a real-life human being is more fun than going up against a CPU opponent; it’s the closest we’ll ever get to playing the most dangerous game at this point. I know how popular putting on a headset, picking up a controller, and going on a digital murder-spree is while little pre-teen shits inform you that they’ve fornicated with your mother. I see the appeal in getting together with long distance friends to play the same game together. I’ve played “Borderlands 2” with friends in Virginia and Nevada, but we did that with PS3s, which means no extra fees. I honestly believe $120 for a video game is not worth that level of enjoyment.

Gamers are being – and have been – nickel and dimed every time we turn our heads. There’s DLC that extends the experience, although sometimes all it does is unlock something that’s already on the disc. Then there are Season Passes, which usually can get you all the DLC as it comes out, but there are times when the developers never announce what it’ll contain, and such a purchase for the cost can be a gamble. There’s pre-order exclusives and collector packs with content that “no one else will have access to”… until it becomes a cheap $5 DLC pack a few months down the road. After all of that, I feel it is absolute fucking bullshit that online-only gaming exists at a time where these companies are already milking us left and right. Now, with this current generation of consoles, there’s a charge to even access the full, true game that we have just purchased because some games are not meant to be played solo at home! The video game industry either needs to change – heh, fat chance – or we as consumers need to stop allowing ourselves to get roped into all this crap. God only knows which will happen first.

That being said, if you already own a new console and have paid for that internet access, then I cannot help but wholeheartedly recommend buying “Star Wars: Battlefront.” It is a game people have been clamoring for for years! The game was released this week and, from what I can tell, all reviews are ongoing. It looks like every gaming site is taking their time on this one, trying to get it just right. For all intents and purposes, however, this game has the impression of being a new hope for fans of “Star Wars” and video games of the property. Is it our only one, though? That cannot be said. As of yet, EA has not actually announced any other games under for the license since this one. Only time will tell, but for right now, after all I’ve seen, this game will make even the most jaded “Star Wars” fan geek-out over its action and what can be experienced therein. If only everyone had the same kind of access, then all fans would be able to play as one with the Force.