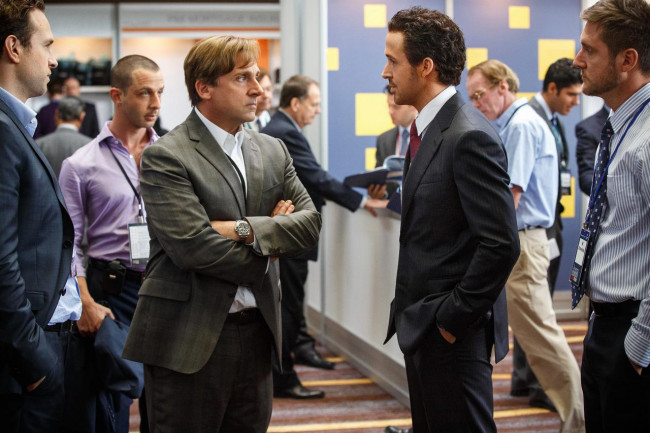 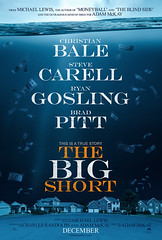 When you think about Wall Street investment bankers, what comes to mind?

For me, it’s a bunch of soulless, greedy business people spending other people’s money to make themselves rich. “The Big Short” is a film that validates those notions.

Adam McKay, otherwise known as the guy who directs all of Will Ferrell’s movies, is at the helm for this one. His direction is this film is surprisingly interesting considering some of the garbage movies he has produced in the past, though the star-studded cast, featuring Brad Pitt, Christian Bale, Ryan Gosling and Steve Carell, may have helped the film.

Based on the book “The Big Short: Inside the Doomsday Machine,” the plot centers around the housing crisis of 2007; the banks were handing out loans they knew people couldn’t afford and making billions in the process – pretty typical Wall Street behavior. The interesting part comes when Bale’s character, who is a brilliant investment banker, notices the abundance of these shitty loans. He then does something that has never been done before – he bets against the banks.

Now, if you’re like me, you’re probably thinking, “Why would I want to see a movie about a bunch of investment bankers making money off of average people’s suffering?”

For two reasons, fellow disgruntled viewer: the performances and self-awareness of the film.

The actors bring all the highlights here, led by the over-the-top portrayals of real people by Bale and Carell; both play thoroughly unlikable but fun to watch characters. Bale is an antisocial numbers junkie who notices the flaw in the system to exploit in the first place, while Carell plays an investment firm head who is fed up with the exploitation and lies the big banking firms tell every single day. These two characters are the standouts in the film, accentuated by interesting performances from Pitt and Gosling.

Pitt plays a retired Wall Street banker who left the business to live an organic, hippy lifestyle, while Gosling plays the typical spray-tanned scumbag banker. Both of them are fun to watch, for sure, but are outshined by Carrell and Bale.

The interactions between characters are snappy and fun. They feel organic and real, the way that actual people would interact and react in these types of situations.

On top of the performances, the film is incredibly self-aware of how distant most people are from the terminology, jargon, and practices of big-time Wall Street banking. To remedy this, the film has segments that feature people who aren’t even in the film, such as Selena Gomez and Margot Robbie, explaining the complicated terminology of banking into terms that normal people can understand. These sections felt out of place at first, but they really did help me understand exactly what was going on.

On top of those sections, there is a ton of exposition in the film for viewers to absorb that help to lay out the stakes, finances, and risks that come along with a plan like this. Even Gosling, who acts as the narrator for the film, has a lengthy section explaining exactly why the housing market is in as much trouble as it is.

Again, this was odd and out of place the first time it happened, but as it popped up more and more throughout the film, I got used to it and understood why it was necessary for such dense material.

Overall, the “The Big Short” was a big surprise for me; I wasn’t expecting this movie to be as funny and entertaining as it was. The subject matter is something I would consider to be extremely dry, though this movie made it interesting, and the characters captured me. I could easily see Carell getting an Oscar nod for a performance like this.

In the end, I give this one a solid four out of five stars. 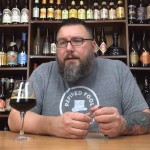 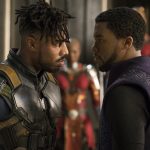