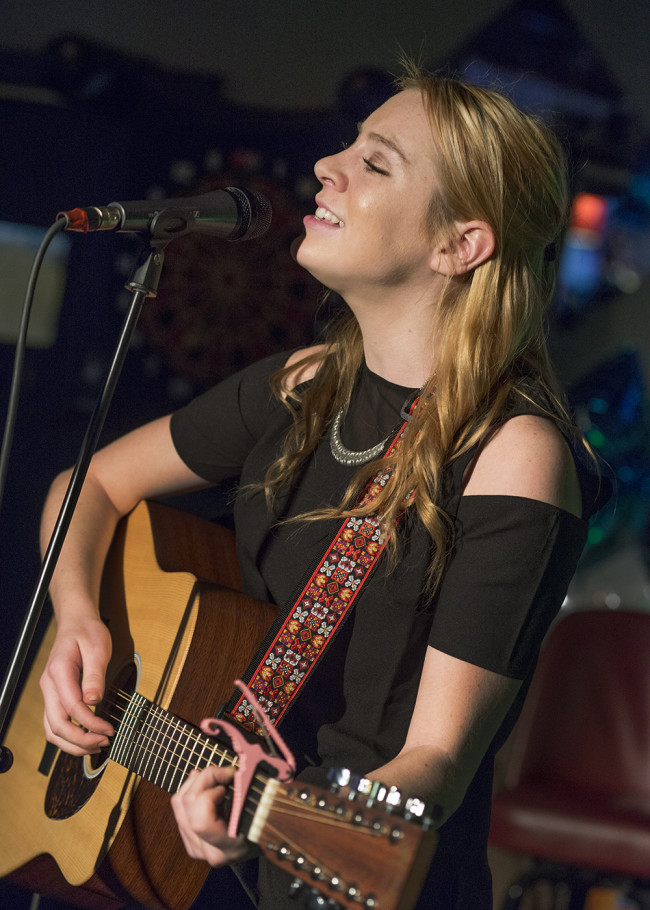 Every week of NEPA Scene’s Got Talent, our free open mic and talent competition at Thirst T’s Bar & Grill in Olyphant, we feature a quick Q&A with the latest audience vote winner, which was young singer/songwriter Alyssa Lazar on Nov. 17.

We asked Lazar, a 17-year-old junior at Abington Heights High School, about winning Week 12 with her remarkable voice.

ALYSSA LAZAR: I actually initially heard about the NEPA Scene talent show at the hair salon, but I wasn’t sure if it was still going on. A month or so later, my friend, fellow Abington Heights High Schooler, fellow musician, and fellow finalist James Barrett told me I should go. So I did. And I’m sure glad I did. It would’ve killed me to have missed an opportunity like this.

AL: The first time I sang in public was when I was about four years old. I was in dance class, and I had asked my teacher if I could sing the “Titanic” theme song for the class. After that, she asked me to open up my dance recital with “Over the Rainbow” for the Devine School of Dance. From that day on, I never stopped singing.

Shortly after, I started taking piano lessons and immediately fell in love. I wrote my first song in the third grade. I just loved putting words and music together. It became my favorite pastime. By six years old, I moved on to singing the national anthem at local football and baseball games. At 11, I was invited to sing the anthem at the Little League World Series. I returned at 13 to sing again.

I joined Our Lady of Snows Church choir in kindergarten. In sixth grade, I became a cantor at the church. I became very serious about songwriting at the beginning of middle school. I entered an original song for the “Reflections” program and took first place in the state.

The summer before I went into eighth grade, I went to Nashville with my family and became a member of the Nashville Songwriters Association. While I was there, I got to sing an original song called “In Crowd” at the Bluebird Cafe. It was so exciting to get to sing where artists like Taylor Swift, Garth Brooks, and Faith Hill had performed. I was also fortunate enough to meet some incredible songwriters there at a writers’ seminar, one of them being Dave Turnball, who wrote “The Boys of Fall.” It was truly amazing.

The same year, I had entered a singing competition at the Stagecoach Inn and took first place. The prize was recording studio time, so I got to record a few of my originals. In ninth grade, I was lucky enough to be able to perform an original Christmas song at a holiday showcase at The Bitter End in Manhattan, where artists like Billy Joel, Lady Gaga, and Etta James have performed.

Nowadays, I perform at local venues every week. I started off singing at coffee houses, such as Duffy’s, and many Scranton First Nights, such as Bella Faccias, which gradually turned into more and more venues, such as Andy Gavin’s, Cooper’s, La Cucina, Damon’s, and many others. This past New Year’s Eve, I was chosen as a featured performer at First Night Scranton, where I performed at the AfA Gallery. That was truly an honor.

I am also requested at many private venues and was fortunate enough recently to be asked to entertain Thanksgiving Eve at a benefit at the Hilton for the Children’s Advocacy Center, which benefits abused and neglected children. I love performing for any venue that will help children who are less fortunate than myself. Close to my heart is a show I perform in every year to benefit children with autism, as well as organizations like Saint Joseph’s Center.

NS: You have a very powerful and striking voice. Are you professionally trained?

AL: Thank you so much! I actually have not trained professionally, I’ve just been singing non-stop since I was about three years old, singing to Martina McBride cd’s in the car with my mom.

NS: Do you do anything special to maintain your voice?

AL: I just make sure to stay hydrated and drink lots of water whenever I’m performing.

NS: You have quite a few covers on your YouTube channel. How do you choose what songs to cover?

AL: Good question! A lot of the songs I sing are songs that I grew up singing. A lot of them are also popular songs I thought people would enjoy to hear me sing at my gigs. A lot of them are also requests! I was asked by the Jewish Home of NEPA to learn “Where the Boys Are” by Connie Francis when I came to sing for them, for instance. Now, I sing that song all the time. Of course, I also sing songs simply because I personally love them too.

NS: Tell us a bit about the writing and inspiration behind your own songs.

In eighth grade, I recorded eight acoustic originals and put them on iTunes, Spotify, etc. Now they’re kind of hard to listen to. It’s hard to listen to a 13-year-old version of yourself now being so used to hearing the 17-year-old version! It’s weird! I also just finished recording four of my original songs at SI Studios in Old Forge, and I am so excited for everyone to hear them. I’m extremely proud of how these turned out.

AL: I cannot imagine doing something with my life that doesn’t involve music. I just want to be able to share my music and perform for the rest of my life. My dream has always been to become a professional musician. I can’t even imagine a world where I’m not doing music, really. There is no backup plan!

AL: Oh my gosh, so crazy. Let me paint the scenario for you. It’s 1 a.m. on a Tuesday. I’m thinking, “It was so much fun to sing here. Man, I really, really, really hope I win. I can’t even miss school tomorrow; I’m already missing a day this week,” and then the harsh realization of, “Oh God, I’m going to have to wake up at 630 a.m. still.” And then, my name was called. If I had to wake up at 4 a.m. and go to school, it couldn’t have tamed my happiness. I was so so so excited.

AL: Why do I think I won the audience vote? Maybe it was because I made sure I had a good song selection that people would enjoy and that would fit the environment well! I sang “Girl Crush” by Little Big Town, my original song “Victim List,” and “I Will Always Love You.” Maybe that was it. But I think it was just the universe’s way of saying, “LOL, you’ve got a rough wakeup call ahead; I’ll throw you a bone!” No matter how it happened, I was so appreciative to see that the audience enjoyed my performance and voted for me. That’s awesome.

AL: I’d love to say I’m going to do something really cool with my $50 prize and go buy a 10-foot-long hoagie or 50 orders of value-sized fries from McDonald’s or something crazy like that, but I think I’m going to do the boring thing and save it!

AL: I’m so looking forward to the Finals Showcase. I’m probably most excited to get to get all dolled up and put on a good show with my fellow finalists. It’s going to be really cool; I can’t wait.

AL: The local arts and entertainment scene, I’m proud to say, is really striving to promote the arts. Between Scranton First Nights, local open mics, and NEPA Scene, NEPA is really trying to provide opportunities for musicians and artists like myself, and for that I’m very thankful.

AL: I’ll be singing at the Ritz Theater in downtown Scranton this Friday, Dec. 4, and then Ale Mary’s on Dec. 5!

AL: I post a lot of videos on YouTube that are mostly covers, but you can also find my originals on iTunes and on Spotify. I’ll have new music on iTunes and Spotify soon!