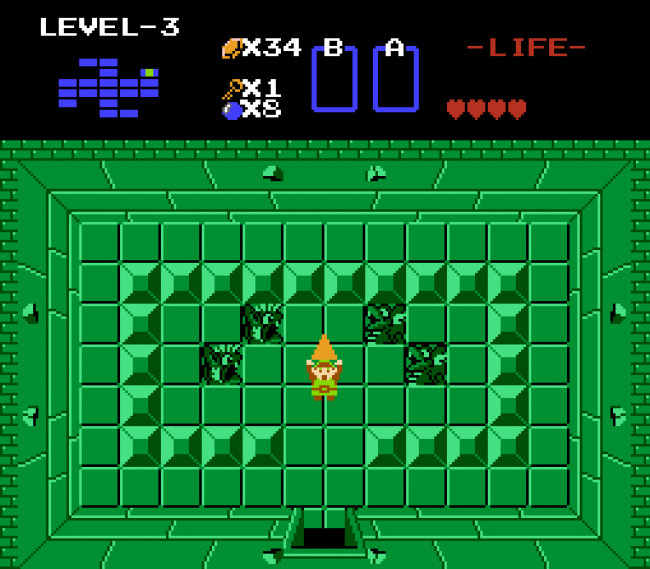 Chances are that by the time you get to read this fine article, you will either be nestled in your bed (like good little children!) or just enjoying some time around the Christmas tree with the lights down, a glass of eggnog in your hand, perhaps by a roaring fireplace. That sounds nice, doesn’t it? Well, I hope this is another fine accompaniment to this holiday season for you, as today on Turn to Channel 3, we’re taking a look at the humble beginnings of one of the longest running video game franchises, a game that elicits so strong a response that fanboys everywhere still come running to the defense of any harshly criticized entry in the series.

Today, boys and girls, children of all ages, we take a look at “The Legend of Zelda” on the NES. Today’s review will not be on my preference for the sequel versus the original, or even the cultural impact of the game in the vast history of the industry, but instead, quite simply, if it is still worthy of the lauded praise in receives on a daily basis and if it is still fun to play today, nearly 30 years from its original release. Let’s return to Hyrule, friends!

“The Legend of Zelda” (NES)

Any game in the NES library deserving of the term “iconic” usually earns it in many different ways, but to be as lasting and enduring a video game phenomenon as “The Legend of Zelda,” it all begins with a soundtrack that isn’t just great – it is seemingly embedded within the psyche of every gamer who has ever picked up that splendid gold cartridge. In the same way gamers can recall their first game or the first time they had an encounter with a difficult boss, the vast fan base of “The Legend of Zelda” can still recall the very first time that title screen was displayed with that epic music, or perhaps when that ever-so-classic overworld theme hits, Hyrule sprawling out as you go from screen to screen.

Then again, some gamers recall the little things, like the sound effect that plays when you discover a hidden entrance, the text being displayed and, of course, when a new item is found. “The Legend of Zelda’s” creator based this game on his love of exploration as a child, but it is also a franchise deeply rooted in some stellar music and sound effects that still appeared in entries to follow.

While your scribe was never a fan of the viewpoint presented in the original “Legend of Zelda,” the bigger concern here is that the graphics just haven’t aged well in some situations, even if you’re just comparing apples and oranges with the sequel which, as I said, weird people like me preferred. This isn’t to say that the graphics are terrible, but Hyrule seems to look a bit predictable and bland in 2015 in comparison to its peak, but the dungeons and enemies still stack up pretty well in retrospect.

I will just say, when looking at “The Legend of Zelda” as a whole, the graphics are the weakest of the categories I examine in any game, but did it really matter at the time? Heck, does it even matter now? Gamers didn’t line up to play this for the graphics; they came for the adventure of exploration not present in any other game at the time.

Regardless of how anyone feels about “The Legend of Zelda” in 2015, there’s one thing that’s still quite apparent – this game is iconic in so many ways, but it all begins with the fact that it is still a blast to play. Many early video games on the NES were so revolutionary in that, prior to many of them, we were limited to just one screen of action, one little snapshot if you will, of entertainment, and when we broke out of those boundaries, “The Legend of Zelda” not only epitomized that change, it took it one step further in eliminating the “Super Mario Bros.” syndrome of having to play games in a strict linear fashion.

If the era of video games prior to the NES is sometimes considered “The Stone Age,” with the video game market crash in 1983 being “The Dark Ages,” then one could say that the NES, largely led by titles like this, began a “Golden Age” or a “Renaissance Era” that would last for quite some time. Grown adults weep over things involving this franchise, and many people wonder why, and while I can’t speak for every gamer who wears their love of “The Legend of Zelda” on their sleeve, I will say that I think this is because, at its core, “The Legend of Zelda,” especially the original, represents what the creator intended, and that is a child-like love of exploration.

We now live in a world where video game developers feel the need to tell all of us, especially children, what to do. They take us by the hand and often say, “Touch that button, but not that one,” with prompts that save you from unfortunate circumstances within the game. Tutorials and the like have robbed gamers from truly experiencing the fun of trial and error. Fans of this franchise have embraced it still in 2015 because it brings them back to a time when games were simple, and yet challenged you in ways that you don’t always find in today’s modern gaming scene.

With memorable characters, not one but two challenging adventures, and gameplay mechanics that are still entertaining nearly three decades later, as far as just sheer fun goes, there are few adventures worth taking more than “The Legend of Zelda.”

Some have argued that “Super Mario Bros. 3” and the propaganda train attached to it was the very best marketing Nintendo did during its formative years, and while I will never deny the sheer hilarity of the longest infomercial in the history of gaming known simply as “The Wizard,” I firmly believe that, in their gold cartridges with a square cut in the back of the box so you could gawk at it for hours, the two “Legend of Zelda” titles for the NES had the most simplistic and yet most successful forms of marketing from the company. Kids who loved video games weren’t going to bed with visions of sugarplums dancing in their heads; they were going to bed hoping that, when they awoke the next morning, an NES console with “The Legend of Zelda” was sitting under the tree.

The funny thing is, something tells me that now, in 2015, there are still some card-carrying members of the Man Child Club that once again hope to experience the same thing – you know, after a night of yelling at their mothers about meatloaf. If you grew up with an NES and you want one again, then you need to make “The Legend of Zelda” a vital part of your collection because, seriously, when is your inner 8-year-old ever wrong?

Here at Turn to Channel 3, I’d like to wish you all a Merry Christmas and, remember, if you feel the need to sneak downstairs in the middle of the night to sit by your tree and play video games while your own children are sleeping, it’s OK; no one is judging you.

Next time, we end the year with the aforementioned propaganda train known as “Super Mario Bros. 3!” Until then, game on!