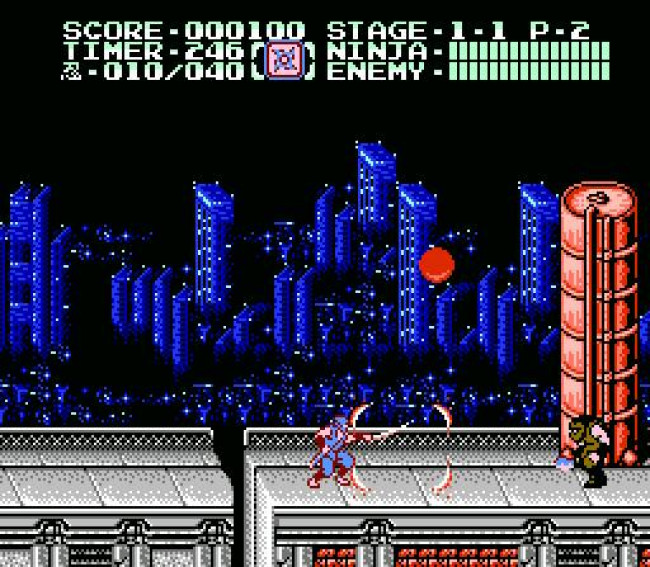 In a way comparable to other firsts in your life – your first job, your first car and, yes, your first love – gamers often reminisce about the very first game that challenged them in a way that both brings back fond memories and digs up some painful ones as well, almost like shellshock as you recall throwing your NES controller against your television screen as your parents yelled at you from the other room not to break anything because they, not you, were paying for it.

Today, I look back at a game that epitomizes that classic love/hate relationship – “Ninja Gaiden II: The Dark Sword of Chaos” – as we continue with our “Retro Christmas” theme here on Turn to Channel 3!

With companies like Konami and Capcom cranking out great games with stellar soundtracks, it is easy to overlook the equally impressive soundtrack in this title, but you’d be quite wrong in doing so, as this music really carries both the intensity and sense of urgency in the game from start to finish. So many gamers were in awe over the cutscenes in the game, and there’s no denying that they were impressive for the time, but without some great composing to tie it all together, what difference would it make?

Perhaps in no other action title for the NES is the presence of great music of the utmost importance than in the “Ninja Gaiden” titles, and this sequel has the most complete and balanced menu for your ears. The sound effects are sparse, but what’s there does a good job of complementing the soundtrack.

“Ninja Gaiden II” is another one of those NES games that, at first glance, doesn’t look that impressive at all graphically, but what this usually means is that you have to dig a bit deeper and play through the game extensively to fully appreciate what you’re looking at. It is easy to toss this game aside for relying heavily on the cutscenes to look glorious in the eyes of the gamer, when in fact this only represents a sliver of what is presented here.

Whenever I share my appreciation for this game to friends, I often use the train level as reference because there’s so much going on around you, with Jason Voorhees extras jumping at you, those damn eagles causing you nightmares, and the scenery in the background blazing by as you leap from train car to train car. For a game that is 25 years old, that’s pretty extraordinary for the time, and the fact that it is still a fun level to play all these years later is a testament to the work that went into the level design, enemies, and movements of our ninja, Ryu Hayabusa.

Let’s not beat around the bush here – “Ninja Gaiden” games are notorious for being incredibly difficult, in the same vein as games like “Contra” and the “Ghosts ‘n Goblins” titles on the NES and SNES, and yet gamers come back to them, time and time again, for reasons those outside the realm of gaming just can’t understand. Why would anyone want to play a game that has bats and eagles that cause your brave and courageous ninja to go into the fetal position if hit during a jump as you painfully watch him descend into some unholy pit to the unknown? Why would anyone want to play a game with cheesy cutscenes, levels that are affected by the weather, and bosses that are seemingly just a random hodgepodge of ideas concocted one rainy afternoon at the Tecmo offices?

The reason is, quite simply, it works. In the same way that Mario riding around in a windup boot in “Super Mario Bros. 3,” Pit falling victim to an eggplant curse, and the ability to use a bird’s beak as a weapon in “Battletoads” works, so does everything in “Ninja Gaiden.” The game has a nice balance of action, platforming, weapons that include having shadow ninjas to help in your attack, and levels that are both challenging and nice to look at. Very few games on the NES had that curse of being so difficult and yet so entertaining in a balance that favored fun above all. You can make any game difficult, but will it still be a game a sane human being would want to play? Entertainment is key in gaming, but if you can’t carry that throughout the game, who cares if it is easy to pick up and learn?

As with everything on Turn to Channel 3, this is all a matter of opinion, but to your faithful scribe, “Ninja Gaiden II” is the pinnacle of the series on the NES, as the third and final installment just didn’t quite capture the allure of the first two games, yet both are still selling for way more than their predecessors. “Ninja Gaiden II” is like many sequels to popular franchises that began on the NES – gamers have fond memories of it and always seem to remember it more than the originals in most cases, which is largely due to the hype machine at Nintendo that focused on a lot of these sequels over the years. “Ninja Gaiden II” is not the only retro gaming ninja title out there, but it is definitely one of the better ones that belongs in any serious NES gamer’s stash for certain. Just stay away from those damn eagles.

Well, that does it for me. Can you believe that we are only about two weeks away from Christmas? Next week, we journey from the realms of ninjas doing battle on moving trains to athletes in the boxing ring with a perennial NES favorite, “Mike Tyson’s Punch-Out!!”

Until then, finish up that Christmas shopping, have yourself a cold eggnog, and make some time to game on!