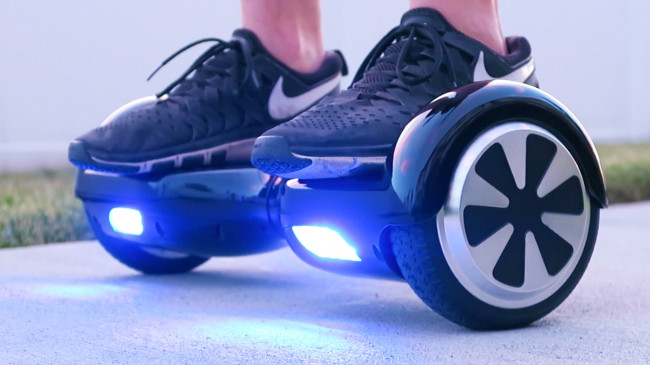 I saw a report one morning on ABC’s “Good Morning America” that there is a chance that “hoverboards” can overheat and catch fire during charging. That’s actually all the details I know, I’m afraid, as I totally blissed-out at the onset of the report. The headline made me really excited… actually, let me rephrase that. The prospect of hoverboards, as mentioned in the headline, made me excited – not the threat of potential fires across the globe. I just wanted to make that clear, people. Anyway, as I came down from my nerd-high, my eyes focused back onto my TV screen to find out that no one – not the anchors, not the reporters, and not even the shitty manufacturers – knows what the hell they are talking about!

The objects at the center of the story were, in fact, not hoverboards. Rather, they were those dumb-looking, two-wheeled mobile platforms. You know the ones! Their kiosks can be seen strewn about malls across this great land of ours. They are generally manned by a single dead-eyed sales clerk who’s perched, unsteadily, on a sample product trying not to careen into a pack of shoppers for hours on end. Rarely is a transaction ever witnessed but, boy, he certainly tries hard enough for them. Now that I think about it, that one clerk may be the only person employed there. I know I have never seen another soul atop one of those things trying to hock them. Hmmm… could be clones too but, then again, if they aren’t selling real hoverboards, they can’t possibly have the technology to clone an associate. (Shit! Let me get this article back on track.) Regardless, that’s what was catching fire in the report – and not in a “Hunger Games” sort of way.

Nevertheless, how the hell can you label something as a particular thing if it doesn’t actually do what the label explicitly says it does?! I will not stand (or hover) for it! If you are going to call an item a “hoverboard,” then the shitting thing better damn well hover! This som’bitch rides around with two wheels firmly in contact with the ground! If there isn’t a gap or space between the surface of the ground and the bottom of the object, then it doesn’t hover, now does it? I grew up watching “The Jetsons,” “Back to the Future Part II,” and various other future-based cartoons and movies. I know how a hoverboard is supposed to work and, from my expert opinion, this isn’t a hoverboard. Shit… this is how a real hoverboard is supposed to look and work! That dumb thing is nothing but a rudderless Segway, and Segways, by definition and design, are not hoverboards!

By the way, is it just me or does this design seem like really a bad idea in general? Segways alone were difficult to drive, even with that pedestal and handlebar setup attached to them. At least that setup gave the driver the illusion of control where there wasn’t much present. Now, with those removed, it’s just a waiting game before severe injuries start popping up all over the place.

The other thing that occurred to me is that while there is probably a posted age or weight limit for operating this thing, I guarantee you there will be parents buying these for their children for Christmas. When they unwrap them, one of two things is going to happen. The first is those children will be severely disappointed because they may be smart enough to know the difference between “rolling” and “hovering,” and they would know what they received is nothing but a big box of lies. The second is they would be overjoyed by “the future is now” scenario, predicated by their youthful ignorance, which would lead to their expectations of future science and technology becoming disastrously lowered. If you ask me, neither prospect is encouraging.

And, yes, I am going to address the rather large elephant in the room – there’s also that possibility of them bursting into flame while charging. If this is as widespread a problem as it’s made out to be (and not minor occurrences being blown out of proportion), then it is absolutely awful, and I pray no one has to experience that happening to them or a loved one. That said, let me point something out – electronic gizmos used to catch fire all the time back in my youth! I remember toys being taken from me left and right by my mindful parents when I was a child because of “fire hazards” and other recalls of some sort. Honestly, you kind of get used to it. It came with the territory of being a child in the late ‘80s and early ‘90s, and there is a part of me that feels I’m better off for it; it toughened me up in a way.

Plus, when one toy was taken away, a new one usually replaced it. If timed properly, the hazardous one would be pilfered just as you were losing interest, then – BOOM – a new toy for the toy box! This item and situation is a little different, though. Not just because of the looming threats of hotfoots by the hundreds, if not thousands, but because the operation and use of the item itself can and will lead to injury. Children (no matter which camp they hail from in the two examples above) will probably face identical outcomes if they use these false “hoverboards” regardless of the fire threat. They’ll experience long wait times in the ER because children and preteens cannot walk and chew gum at the same time, let alone drive an object with their shifting weight! Mark my words here, people! Five or 10 minutes alone with these things and your children will be slamming face-first into a wall or getting thrown onto the pavement. You know it in your hearts to be true!

While this item has the ability (when the situation is just right) to spontaneously combust, the bigger travesty is the blatant misrepresentation of the item itself! How would you like it if you went to look at the newly advertised “hover car” at your local dealership, only to find out they still had four wheels and remained in contact with the road? You’d be pretty fucking pissed off, and rightly so! So let us not hurt the children by buying into this clear false advertisement and new fad. They rank right up there with those Heelys (the sneakers with roller skates built into the heels) kids “needed” so badly almost a decade ago. We all know the kind of face-busting injuries those caused, and if you don’t, YouTube will surely have plenty of video evidence if you search for five minutes.

Next time you are in a mall, you should probably shield your children from them and just keep walking right by those kiosks, unless you want your children to have a detailed understanding of compound fractures and the average response time of local ambulance crews. As for me, I’m going to wait until legitimate hoverboards come out and, by the time they are readily available to the public, I may just be old enough to tell those hover kids to stay off my hover sidewalks.