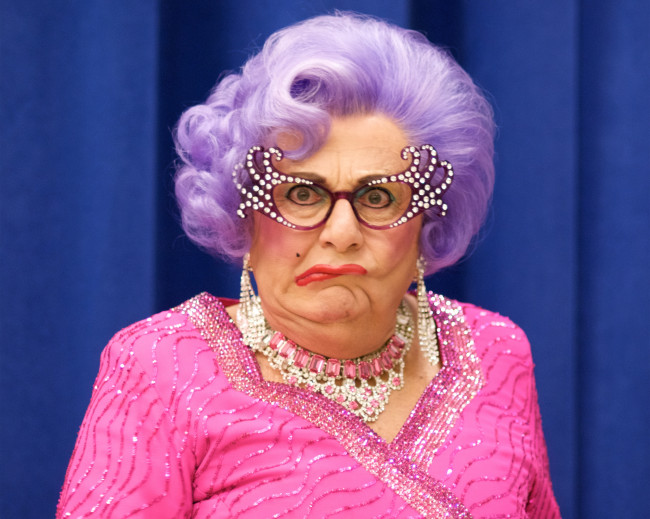 It seems as though, just when I feel that I’ve heard the worst thing I’ve ever heard, the door to the Dungeon of Transphobia creaks open and out comes another shadow of the past to enlighten us with its ignorance and idiocy. This time, from one Barry Humphries, a.k.a. Dame Edna.

If you’ve ever wanted the answer to the question, “Whatever happened to Dame Edna?” the answer is that she is apparently still performing. At 81 years old, Barry Humphries, the man who created her in the 1950s, is active and still on the comedy circuit, performing as the female persona who rose to fame in the late ‘70s/early ‘80s and continued on through the ‘90s.

Edna began as the persona of a housewife from Australia and slowly elevated to damehood, as specious as that statement may be. The character’s mainstays usually focus on satirizing celebrities, lampooning class snobbery and using prudishness to poke fun at political leaders and fashions – not to mention the whole “man in a dress” trope, a comedic shtick dating much farther back than even the likes of Milton Berle and Jonathan Winters. I remember this vague character appearing on TV every once in a while, and I wondered what was going on. Given my young age, I just assumed the jokes were going over my head and that I’d get them when I was older. Well, I’m older now and I’m still not laughing.

Humphries (as himself, ostensibly) recently made several transphobic comments about Caitlyn Jenner, coming out in support of equally transphobic statements made by Germaine Greer, another victim of reptilian thinking whose discourse I find impossible to tolerate. Humphries’ comments amounted to calling Jenner a “ratbag” and “self-mutilated man,” as I assume he believes of all transgender women, but I wouldn’t know for sure. It’s difficult to know where Humphries ends and Edna begins. What is satire and what is his actual opinion? I can’t tell because we hear this kind of tripe all too often from people who you’d think would know better. In a strange twist, however, it would appear that even Edna has distanced herself from Humphries, further adding to the confusion about who is saying what, exactly, and how seriously it should be taken.

Either way, satire or not, the joke’s over. What Humphries would call “the cult of political correctness” I would call respecting one’s basic wishes. Regardless of what Humphries/Edna has to say on the matter, misgendering Jenner and siding up with the likes of Germaine Greer serves no useful purpose except to further harm the transgender community. Even something as simple as accusing Jenner of transitioning simply to “steal the spotlight” from the rest of the Kardashian matriarchy is, itself, damaging and problematic for the connotations it has on the rest of us.

As par for the course, Humphries makes his bread and butter by saying shocking things to get attention. Well, here’s something that is apparently shocking to some people – trans women are women. Full stop.

Do I have the world’s attention yet?

I’ll say it again… Regardless of anatomy, surgical procedures and whatever biological “proof” one might want, a woman is a woman if she identifies herself as one. There’s nothing to debate, really. What we know about chromosomes, DNA, brain structure, and fetal sexual development is enough to back this statement up from a scientific, biological perspective. Further, when we surrender the right to designate gender to the prejudices of other people, even so-called “experts,” only harm can come of it. We set ourselves up for failure as a society. We identify false positives while reinforcing negative stereotypes. Making assumptions helps no one. Gender is in the identity of the beholder; let those who identify themselves as they perceive themselves to be be the final judges of who they are. If there was a transgender bill of rights, this would be my first article of declaration.

I would prefer it if my comments on Humphries stopped there, if only because, were I to task myself with following up on the thoughts and opinions of celebrities with the intention of correcting every dangerously problematic detail they might utter on topics they, seemingly, know nothing about, it would be a full-time job. Even so, especially as we live with the fallout of some decidedly unethical behavior from other “journalists” in the valley (as is well-covered in this week’s NEPA Scene Podcast), some weeks I just don’t have the luxury of ignoring it.

Statements like those made by Humphries are dangerous because they reinforce incorrect assumptions and eschew facts for opinion. Further, they set progress back years, even decades. If enough damage is done, it could lead to suicide and outbreaks of violence – which happens all too often. Every time someone says, “I’m still calling him Bruce,” it tends to breed like-minded individuals who already act on their preconceived notions. It allows politicians to further see us as inhuman freaks, undeserving of dignity or even basic human rights. It hinders the fight against discrimination and makes it easier to deny us services. It destroys everything we’ve worked for.

The problem, of course, is that the media lives to print things like this. Someone will say some horrible thing, the thing will garner massive amounts of attention, pulling in counter stories, op-eds, so on and so forth. Eventually, that someone either concedes and apologizes or the backlash actually bolsters their opinion as they claim they are being censored by liberal “political correctness police.” And then the cycle begins again with the next celebrity topic. It’s quite exhausting, which is why I usually withhold my opinion until absolutely necessary – no need to give these people more unwarranted attention, right? Unfortunately, some things just can’t be let go, even when it falls from the mouth of someone whose waning popularity hardly warrants it.

Meanwhile, one final note: part of me hates that I must, once again, defend Caitlyn Jenner, herself a highly problematic figure who is no stranger to saying toxic things. The problem there is that the transgender community is judged by association because, apparently, she speaks for all of us, right? No, of course not. But here we go again, damage control. How tiring…

In the end, at least now we finally know what became of Dame Edna… not that anyone really wanted to know.