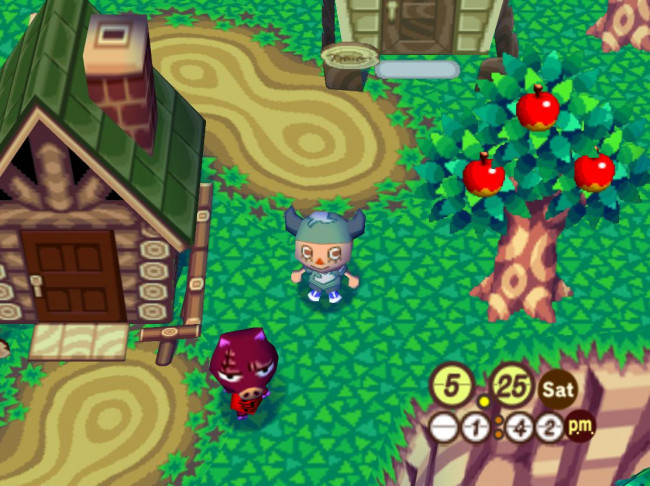 Not everyone has a fondness for their college days. It could be from a poor experience with everything from living in a dorm to trying to actually learn something, and I, for one, feel bad for those individuals. Luckily, your faithful scribe has some fond memories from my four-year stint at Keystone College, and a lot of them involve video games, to the shock of, well, no one.

While I could go on and on about those nights of multiplayer “Conker’s Bad Fur Day” marathons or my roommate playing “Ocarina of Time” as I tried to sleep, today on Turn to Channel 3, we play another game that not only changed the way we looked at video games, but was a staple of so many all-night study sessions and impending snow days at Keystone College. On tap today is the GameCube title “Animal Crossing.”

So why were people taking breaks from their studies to enjoy cinnamon clove cigarettes and create cute little houses with just as equally cute characters? Furthermore, how has this franchise endured all these years with countless entries in the series? Let’s journey back to 2002 with Tom Nook and company to see just what made “Animal Crossing” so appealing and if it remains that way over a decade later!

Cute, quirky, and different, “Animal Crossing” took a formula that was originated by Will Wright and the folks at Maxis with “The Sims,” painting it in hues of creativity that had not been seen at that point in time. The soundtrack of “Animal Crossing” is a collection of music that not only ties together the real-time element of the game, but also the personalities of the villagers you encounter, as well as the situations you find yourself in throughout the game. Several times in this article, I am certain to reference the fact that, yes, in 2016, this doesn’t seem like that big of a deal, but in 2002, with Nintendo finally making the switch to a disc format and taking the company in a whole different direction, this was monumental.

“Animal Crossing” doesn’t rely on these cute little ditties to carry it to the promised land of gaming glory, though, because just when you think you’ve heard everything, enter the equally legendary K.K. Slider, a seemingly plain-looking dog with a guitar. He not only represents the importance of keeping time within “Animal Crossing” in relation to special events, he also represents the purest and most well-composed music in the game, and if you doubt me on that, ask the countless video game-inspired musicians and guitarists who cover his tunes on the daily.

There’s no denying the cute, adorable, and enduring characters of “Animal Crossing,” and the whole feel of the game seems ripped out of an imaginative child’s mind, or perhaps from an adult who never grew up. The game follows elements of time, weather, and the seasons, and all of it looks pretty charming, but the issue is when the camera gets close, in comparison to its rivals of the time, the graphics seem a bit rough around the edges, which is a real shame because a lot of the actual key gameplay is done in that close-up angle, becoming a mess for the eyes after a time. One has to wonder what an HD treatment of this game would look like, but as far as the original piece goes, “Animal Crossing’s” graphics seem to have been hit the hardest by that pesky little thing called time.

If you grew up with this game as a vital part of your existence, you can look past this shortcoming, but I truly believe that, while it’s initially still as charming and full of life from afar, the close-up viewpoints in the game showcase the rather glaring flaws of the overall graphic design.

A common theme among all the games featured this month is that they are either well-beloved by gamers or just as equally hated; there is no in between, which truly makes sense for a game like “Animal Crossing.” In many ways, the endearing aspect of it is its deceptively addictive qualities, even to those gamers who feel it is stupid, tell everyone it is stupid, and then secretly (and then not so secretly!) play it until the sun comes up because, hey, something interesting is supposed to happen then! It truly was unlike any game out there, with seemingly something for every gamer to enjoy.

That being said, a lot of it can become quite tedious over time, like running errands for non-player characters, paying off your mortgage, and decorating a house to your liking, some of which can make adults scowl and say, “Pay off a mortgage? Isn’t that what we play video games to escape from?” In truth, they would be correct, but answer this, jaded, bitter adult gamer – when you pay off your mortgage, does an awesome talking raccoon instantly make your house bigger? No? Well, then there’s your answer.

I would also be remiss if I didn’t mention one vital aspect when discussing how “Animal Crossing” was groundbreaking. Upon the debut of the Nintendo Wii, and with it the Wii Shop Channel, poor retro gamers were delighted by the idea of having digital copies of some of their favorite and, let’s face it, far more expensive games, but in a lot of ways, “Animal Crossing,” with the ability to play solid emulations of games like “Donkey Kong,” “Excitebike,” and “Punch-Out!!,” paved the way for Nintendo to take the route of digital downloads, predating the Wii Shop Channel by four years! Again, this may not seem like a big deal now with catalogs of great classics available for digital download, but that’s mind-blowing when you consider the time period and the fact that emulating games was very “underground” in its inception on PCs in the late ‘90s.

With snow days to come, one has to wonder if “Animal Crossing” still has that endearing charm to lure college students into a world of fun as classes are canceled due to a blizzard. There’s no denying the feeling of nostalgia it still brings, the groundbreaking gameplay for the time, or its many loyal fans who still wait for new entries in the series to arrive. That being said, does the nostalgia blind us to the fact that this was a tedious game of repetitive chores from NPCs that annoyed us more than enthralled us? That’s certainly a debate to be had among those who grew up with “Animal Crossing,” but I think, at the end of the day, fun is what we’re looking for, and even today, Tom Nook and company still provide that in spades, so grab your GameCube, stock up on memory cards, and enjoy the simple, yet addicting splendor that is “Animal Crossing!”

Tune in next week when we take on at a game that brought a whole new console into our living rooms as we look at Crash Bandicoot’s debut on the PlayStation!

Until then, stay warm and, as always, game on!