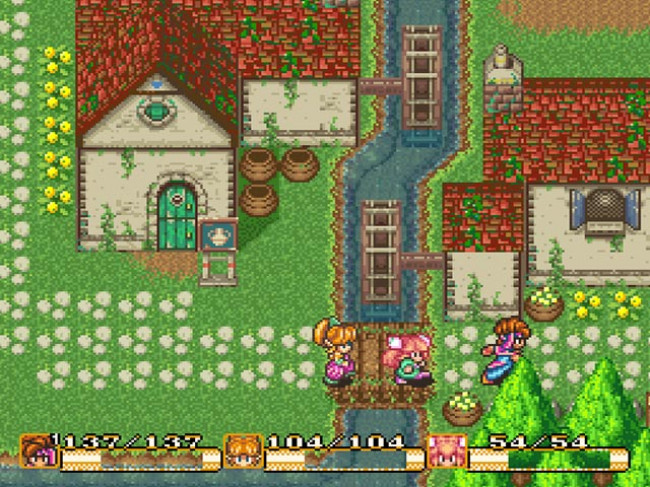 2016 is officially in full swing here at Turn to Channel 3, and as we begin the year, I’m going to be looking at some games that were, without question, game-changers for their respective genres or consoles they appeared on, so join me for “A Month of Game-Changers,” won’t you?

We begin with a game that truly needs no introduction to any fan of RPGs, and yet I’m going to give it one anyhow. Gifted with perhaps the most breathtaking advertisements in print media at the time, as well as one of the most iconic opening tunes to accompany the title screen in any game during the time period of its fame and glory, today we review “Secret of Mana” on the Super Nintendo!

I’ve mentioned this before in reviews of many other quality RPGs in the vast history of gaming, but it never gets old when I say that the soundtrack is always the first building block, the first aspect of the game you notice. “Secret of Mana” continues this trend with one of the most stellar and complete soundtracks of any game on the SNES console. The music presented here readily captures the emotions present in the game, connecting the dots in a story that is worth its weight in gold, and one has to wonder if the title would be so critically acclaimed had it not been for such a breathtaking accompanying soundtrack. It’s still a question worth asking.

The 2D sprites presented here may appear like amateur hour in today’s gaming world, but at the time, these were commonplace within the realm of RPGs, which doesn’t deter a stalwart gamer from enjoying them for their simplicity and cry back to what many feel was a far greater period of time for these games; the character sprites themselves aren’t what the title is known for as far as graphics go. “Secret of Mana” contains some of the most detailed bosses of any RPG, with size and power that still wows gamers to this day, and when you add little details to environments, flowing waterfalls, and grasslands blowing in the wind, you create a world that RPG fans want to come back to, and that’s even before they delve into the story.

Whenever a new approach is introduced to an established genre rich in tradition, it only has one of two outcomes – either failing to capture the attention of the dedicated fanbase or ushering in a new era of thinking within that genre. Obviously, “Secret of Mana” accomplished the latter, changing the way we look at RPGs and compelling many developers to think differently going forward, which is always good for any industry.

Action RPGs are still incredibly popular today, even when games don’t necessarily totally commit to that style, only taking certain aspects of it. While meters and attack styles play a key role in this game, it is still nice to know you’re not waiting quite as long as you would during a “Final Fantasy III” battle to get the job done and move along.

There’s another important note to be made here, and that is that the menu system for “Secret of Mana,” which doesn’t inhibit gamers as much as other RPGs do, forces you to remove yourself from the story, almost to the point where you feel you’re opening and shutting doors to get back to the game. So much of “Secret of Mana’s” stellar gameplay and story is seamless, which makes it easy to jump into, as well as take a break from. One of the most daunting tasks for any developer of an RPG is to find the balance between creating a compelling and engaging storyline and game mechanics that don’t bore or tire the gamer too easily to the point that they want to stop playing. Thankfully, “Secret of Mana” still maintains that great balance, even in 2016, and that’s a testament to the love and attention given to it.

The controls are easy to come to grips with, and it’s a game that encourages exploration while still keeping you on the main path of the story. It is both entertaining and not too overwhelming for novice players, and that’s something that’s been lost over the years since “Secret of Mana’s” debut.

If anything keeps gamers from playing “Secret of Mana,” it would be it’s price tag, as many loose copies soar over the $50 range, and boxed copies climb into the $120 price range, if not higher. While that’s nowhere near the ludicrous prices “EarthBound” goes for, it is still a bit for many gamers to swallow. I can personally attest to both sides of this fence; as an owner of a copy, it is worth the price, but I am also a small business owner with a complete copy sitting in my shop for just over $100 and it isn’t turning many heads past the initial shock of seeing it there. That being said, what isn’t up for debate is the fact that you can’t go wrong with having this game in your collection, however you end up getting it there.

“Secret of Mana” changed so much about a genre without making people uncomfortable – just enough to say that there was more out there past the realms of “Final Fantasy,” and that’s something I’m thankful for every single day as a gamer. Shaking up the status quo is never a bad thing, especially if you do it as well as “Secret of Mana.”

Next time on Turn to Channel 3, we take a look at a franchise that has received quite a bit of attention in the last year as we go back to its humble beginnings on the Sega Dreamcast. On deck next week, I bring you my review of “Shenmue!”

Until then, bundle up – winter has finally decided to show up, and it’s obviously mad that we’ve been laughing at it up to this point. Pour a hot cocoa and game on!