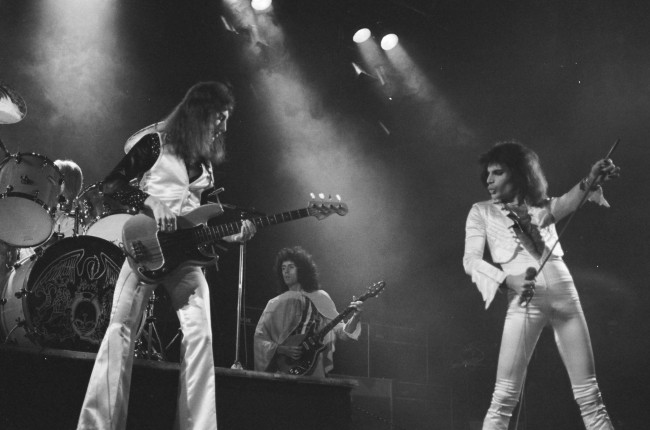 Be part of the legendary event “Queen: A Night in Bohemia” when Fathom Events, More2Screen, and Eagle Rock Entertainment bring the Rock and Roll Hall of Famers’ 1975 concert and a never-before-seen documentary to select U.S. movie theaters nationwide on Tuesday, March 8 at 7 p.m.

This groundbreaking concert has been specially restored and remixed for the big screen, commemorating the recent 40th anniversary of “Bohemian Rhapsody” and showcasing the first-ever live recording of this record-breaking song. Audiences will also enjoy a documentary featuring a wealth of unseen interviews, recently unearthed rushes of Queen’s first-ever video, and outtakes from the recording sessions of “Bohemian Rhapsody” itself. This is the unique story of early Queen told by the band themselves.

Tickets for “Queen: A Night in Bohemia” are on sale now and can be purchased online by visiting fathomevents.com or at participating theater box offices. Fans throughout the U.S. will be able to enjoy the event through Fathom’s Digital Broadcast Network, including Cinemark 20 (40 Glenmaura National Blvd., Moosic).

The new documentary digs deep into the archives to tell the story of Queen as it follows their journey from a struggling band gigging at pubs and colleges to the moment they captured the U.K.’s hearts and minds with what was to become one of the greatest songs of all time. Comprised of the late Freddie Mercury (lead vocals, piano), Brian May (guitar, vocals), Roger Taylor (drums, vocals), and John Deacon (bass guitar), the British rock band Queen formed in London in 1971 and have since garnered more than 130 million in record sales, making them one of the biggest-selling music acts of all time.

The concert was captured live on Christmas Eve 1975 at the Hammersmith Odeon in London and brought to a climax the most eventful and exciting year so far in the band’s career. It was first transmitted live on BBC Two’s “Old Grey Whistle Test” and captured the band firing on all cylinders as they performed breakthrough hits like “Killer Queen,” “Liar,” “Keep Yourself Alive,” and “Now I’m Here,” as well as the now monumental classic “Bohemian Rhapsody.”

“We are excited to bring a very special, one-of-a-kind concert experience to music fans across the nation. Cinema audiences will now have a front-row seat to rock out at one of the most legendary concerts of all time as we celebrate Queen and one of their most beloved songs,” Fathom Events CEO John Rubey said.